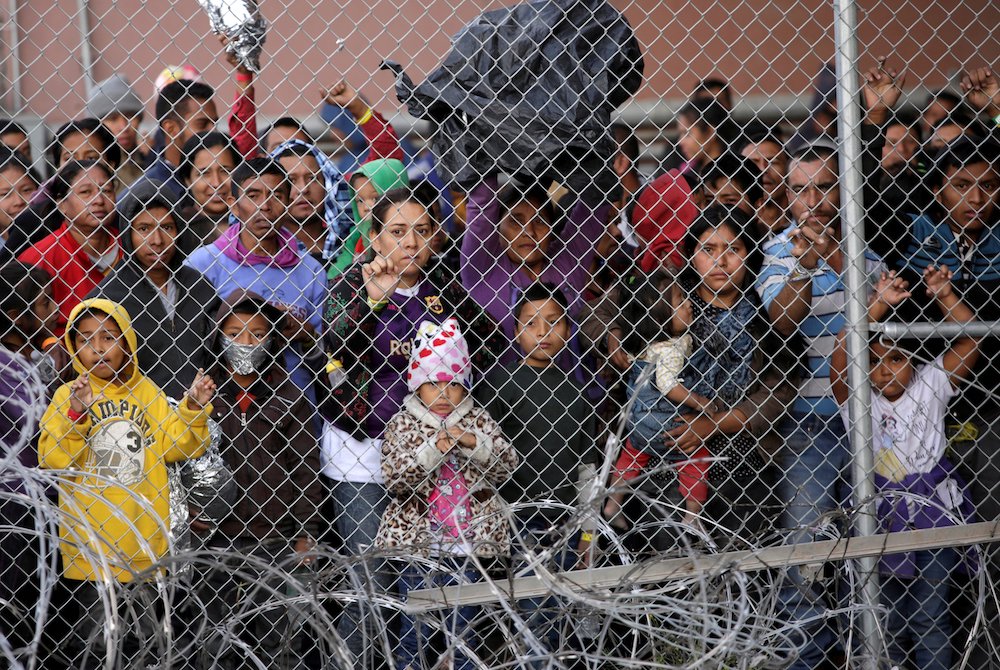 Central American migrants are seen inside an enclosure in El Paso, Texas, March 27, 2019. They were being held by U.S. Customs and Border Protection officers after crossing the U.S.-Mexico border and turning themselves in to request asylum. (CNS/Reuters/Jose Luis Gonzalez) 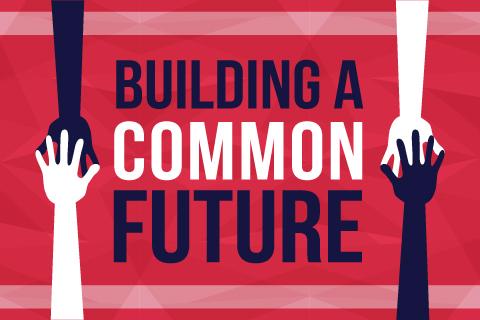 Our world is facing a refugee crisis of a magnitude not seen since the Second World War … On this continent, too, thousands of persons are led to travel north in search of a better life for themselves and for their loved ones, in search of greater opportunities. Is this not what we want for our own children? We must not be taken aback by their numbers, but rather view them as persons, seeing their faces and listening to their stories, trying to respond as best we can to their situation … .Let us remember the Golden Rule: "Do unto others as you would have them do unto you" (Matthew 7:12).

When Pope Francis spoke these words to Congress in 2015, both Vice President Joe Biden and I were present — he right behind His Holiness, I out in the crowd. Though much has changed in the intervening five years, the displacement of people from their homelands persists. Authoritarianism and conflict drive Middle Easterners and Africans westward. Gangs, violence and corruption drive Central Americans northward. And all around the world, climate change is making lands uninhabitable and uprooting those whose families have lived there for generations.

But while the urgency to care for displaced persons hasn't diminished in the past five years, our government's capacity to welcome them in a Christ-like manner regrettably has. Children at the border are ripped from their mothers' arms. Migrants are detained in unlivable conditions where COVID-19 rampages. Young adults brought here as children have been thrust into a years-long legal limbo with the elimination of the deferred action for childhood arrivals (DACA) program in 2017. Hundreds of thousands of Temporary Protected Status (TPS) recipients in our country remain in jeopardy as a result of efforts to terminate their protections. And religious bigotry masquerades as national security with the banning of travelers from multiple African and Muslim-majority nations.

I have seen firsthand the forces that drive people to seek asylum in America. When I was a missionary in Honduras in the early '80s, the country was the second-poorest in the Americas. Today, it has the fourth-highest murder rate of any country in the world. A few years ago, when I returned to the village where I had worked, Jesuit friends explained to me that putting a child in the hands of a smuggler is often less dangerous for a Honduran parent than keeping that child in gang-controlled neighborhoods, where young people are routinely killed, forcibly initiated or instructed to kill their own family.

My time living in Honduras 40 years ago opened my eyes to these horrors, but the media world of today now helps bring these stories to each of us wherever we live. In the words of Pope Francis, it is the duty of us all to be "islands of mercy in the midst of a sea of indifference."

Joe Biden understands this. We have all witnessed his tremendous capacity for compassion, and I have every reason to believe he understands that a nation is judged by what it does for the least of God's children. I am encouraged by his promise to end the Muslim and African travel ban on his first day in office, his pledge to restore DACA, and his commitment to immediately review every harmful TPS decision made by the Trump administration.

He must continue on this track by not only ending the family separation policy but by making migrant family reunion a priority. Crowding in detention centers should be eliminated, and, in accordance with the Golden Rule, every effort must be made to reduce the spread of this disease in those centers just as we seek to reduce it in our own neighborhoods.

Our new president, secretary of state and ambassador to the U.N. should announce to the world that America will welcome refugees with open arms, including raising the annual global refugee admissions cap after President Donald Trump set it to the lowest number on record. And when people come to our southern border seeking refuge, we need to respect their right to request asylum.

As President Biden does all he can through the executive branch, Congress must finally pass an immigration reform bill for him to sign. Dreamers (DACA recipients) and those who have worked in this country for decades are American in every aspect but the letter of the law; it's past time to give them a pathway to citizenship. These are not only the moral things to do but are in accord with our own interests and history, for America has long welcomed immigrants to her shores and found that they lead to more innovation, higher-skilled workforces and an overall better economy.

As I await President Biden's inauguration and think of the millions abandoning the dangers of one home in search for the safety of another, I recall the opening of Gaudium et Spes, promulgated at the conclusion of Vatican II five years before Joe Biden entered public service: "The joys and the hopes, the griefs and the anxieties of the men of this age, especially those who are poor or in any way afflicted, these are the joys and hopes, the griefs and anxieties of the followers of Christ. Indeed, nothing genuinely human fails to raise an echo in their hearts."

To seek a better life for one's family is genuinely human. To flee violence, persecution or starvation is an affliction. If we are to follow Christ, we must act as if the griefs of today's refugees and asylum seekers are our own. We must offer them the hopes and the joys we wish for ourselves. We must make America their island of mercy.

This story appears in the Building a Common Future feature series. View the full series.
A version of this story appeared in the Jan 22-Feb 4, 2021 print issue under the headline: Let America be an island of mercy for immigrants, refugees.