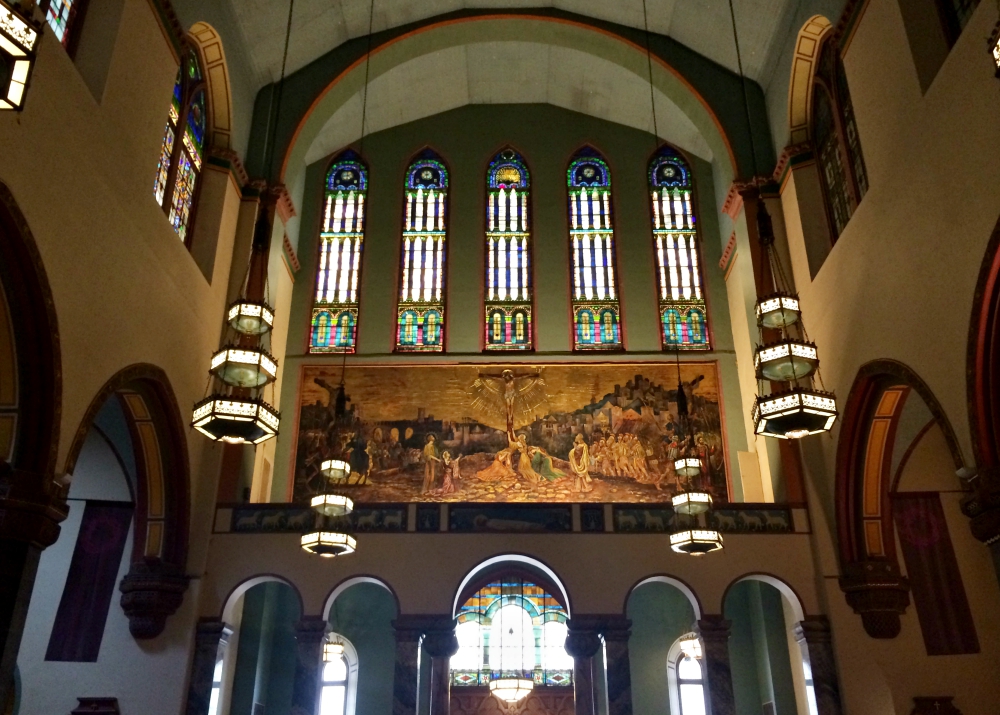 The interior of the Church of St. Paul the Apostle in Manhattan, New York (Wikimedia Commons/Paulo JC Nogueira)

The relationship between LGBTQ Catholics and their church is a Katy Perry song.

Topsy-turvy headlines from the last few weeks prove the point. First, we received news that Pope Francis called gay priest and theologian Fr. James Alison to personally affirm his sacerdotal faculties. As Alison recounts, the pope encouraged him to "walk with deep interior freedom, following the Spirit of Jesus. And I give you the power of the keys."

Alison's report is extraordinary, given his longstanding frankness about homosexuality in the hierarchy and his own gay orientation. His pastoral solicitude for LGBTQ believers, furthermore, makes him a frequent target of those opposed to inclusive ministries.

Second, we rejoiced at the pope's very public meeting with Jesuit Fr. James Martin, whose advocacy has become inseparable from our struggle for recognition and affirmation. Martin described the meeting in glowing terms as an endorsement for his work and "a sign of the Holy Father's care for L.G.B.T. people."

While in Rome, Martin also met with the Vatican's Congregation for Catholic Education to discuss its recent transphobic statement on gender, "Male and Female He Created Them." During the meeting, the prefect of the congregation gave a roundabout apology for hurt feelings.

Throughout his trip, Martin shared LGBTQ Catholic experiences with everyone he met. His reception was warm and sympathetic.

After a couple weeks of positive reports, however, it seems the ecclesial news cycle was due for a downturn. Last week, we learned that bishops representing committees of the U.S. Conference of Catholic Bishops submitted an amicus brief to the Supreme Court in opposition to the LGBTQ civil rights under consideration. The series of three cases before the court may be the single most important development in LGBTQ civil rights since Obergefell v. Hodges gave same-sex couples the right to marry in 2015.

Tragically, the bishops argued that applying laws barring gender discrimination to LGBTQ people would violate their right to discriminate against LGBTQ people. They asked the state to protect the homo/bi/transphobia that they claim is an intrinsic part of their religious freedom.

The whiplash between news cycles leaves me reeling. How can I interpret these signs? Where do two weeks of very different news reporting leave us LGBTQ Catholics? What is the state of LGBTQ ministry in our church, and how can we become better advocates for ourselves?

First, it's vital that we not place all of our trust in the hierarchy. God is, indeed, working among our pastors and bishops, but we cannot and should not rely on them to accomplish our liberation.

History bears out this truth. The 1970s and 1980s were a period of great flourishing for LGBTQ Catholic ministry, yet it came to a sudden halt in 1986 when Cardinal Joseph Ratzinger, then head of the Congregation for the Doctrine of the Faith, issued his Letter to the Bishops of the Catholic Church on the Pastoral Care of Homosexual Persons. Known by many as the "Halloween Letter," the instruction resulted in many LGBTQ Catholic communities being thrown out into the streets. Parishes and dioceses, pastors and bishops who had previously supported LGBTQ ministries suddenly disavowed any connection to the pariah people.

Today, although we may have amazing advocates in priests such as Alison and Martin, many of our opponents would take great delight at seeing us excluded from the church once again. A new pope, a new bishop, even a new priest at a local parish can dramatically change the situation of the LGBTQ Catholics under his watch. LGBTQ Catholics remain in a precarious position.

That said, there are great reasons for hope at the grassroots. No matter what the bishops say for better or worse, no matter what the pope declares in public or in private, LGBTQ liberation marches ahead. The signs are all around us. Local Catholic communities tired of the status quo organize to provide the pastoral ministry, care and affirmation that has been lacking for so long.

In Chicago, St. Clement Parish, known for its vibrant young adult ministry, recently created Affirmed, "a ministry of fellowship and support for LGBTQ+, gender minorities, and allies seeking to cultivate a space in which every person is affirmed as made in the image of God, called to a deeper relationship with Jesus Christ, and invited to share their gifts with the broader parish community." The group began as a coalition of allies seeking to make their parish more hospitable to LGBTQ people. At a recent event led by lay minister Michael Bayer, dozens of parishioners discussed Martin's Building a Bridge: How the Catholic Church and the LGBT Community Can Enter Into a Relationship of Respect, Compassion, and Sensitivity and considered ways they could transform their community.

In New York City, ministries such as my own Out at St. Paul have been serving the LGBTQ community for years. We exist under the guidance, care and protection of the Paulist Fathers, who advocate on our behalf within a much larger and more complicated ecclesial milieu.

Led by lay Catholics, Out at St. Paul is a thriving community that gives refuge to many hundreds of LGBTQ people from the battering waves of homo/bi/transphobia in the rest of the church. A recent teaching series is challenging both Out at St. Paul and the broader parish to consider the ways we can become better allies for intersectional justice.

Neither is God's work limited to cosmopolitan cities such as Chicago and New York. In Lexington, Kentucky, Fortunate Families, "a Catholic Family, Friends & Allies Ministry" under the direction of JR Zerkowski, "supports LGBTQ+ sisters and brothers by facilitating respectful conversation and sharing personal stories within dioceses, parishes and communities, especially with bishops, pastors and Church leadership."

John Stowe, the bishop of Lexington, has supported LGBTQ outreach in parishes and Catholic schools.

Also in Kentucky, Lourdes Parish in Louisville just established its own chapter of Fortunate Families. The new group, Lourdes Pride, includes well-known LGBTQ Catholic leaders such as Greg Bourke and Michael DeLeon, partners who were plaintiffs against the state of Kentucky leading up to the Supreme Court's Obergefell v. Hodges decision. Also part of the group are allied parents and family members who want their parish to be a safe and nurturing community for their children.

The news cycle may come and go, bringing us good reports and bad, but the human beings behind that news remain. LGBTQ Catholics are in desperate need of God's love expressed through the church. I have seen the Spirit blowing in likely and unlikely ways to move the people of God toward affirmation, not condemnation.

Still, we must avoid putting our trust in the hierarchy, which can be capricious and has hurt us in so many ways in the past. At the grassroots, we have reason to hope that our labors are not in vain, and we rejoice at the sight of God giving increase to the work that is growing up around us.

[Jason Steidl is a lecturer in the Department of Religious Studies at St. Joseph's College and active in Out at St. Paul, the LGBTQ ministry of his parish, St. Paul the Apostle in Manhattan, New York.]