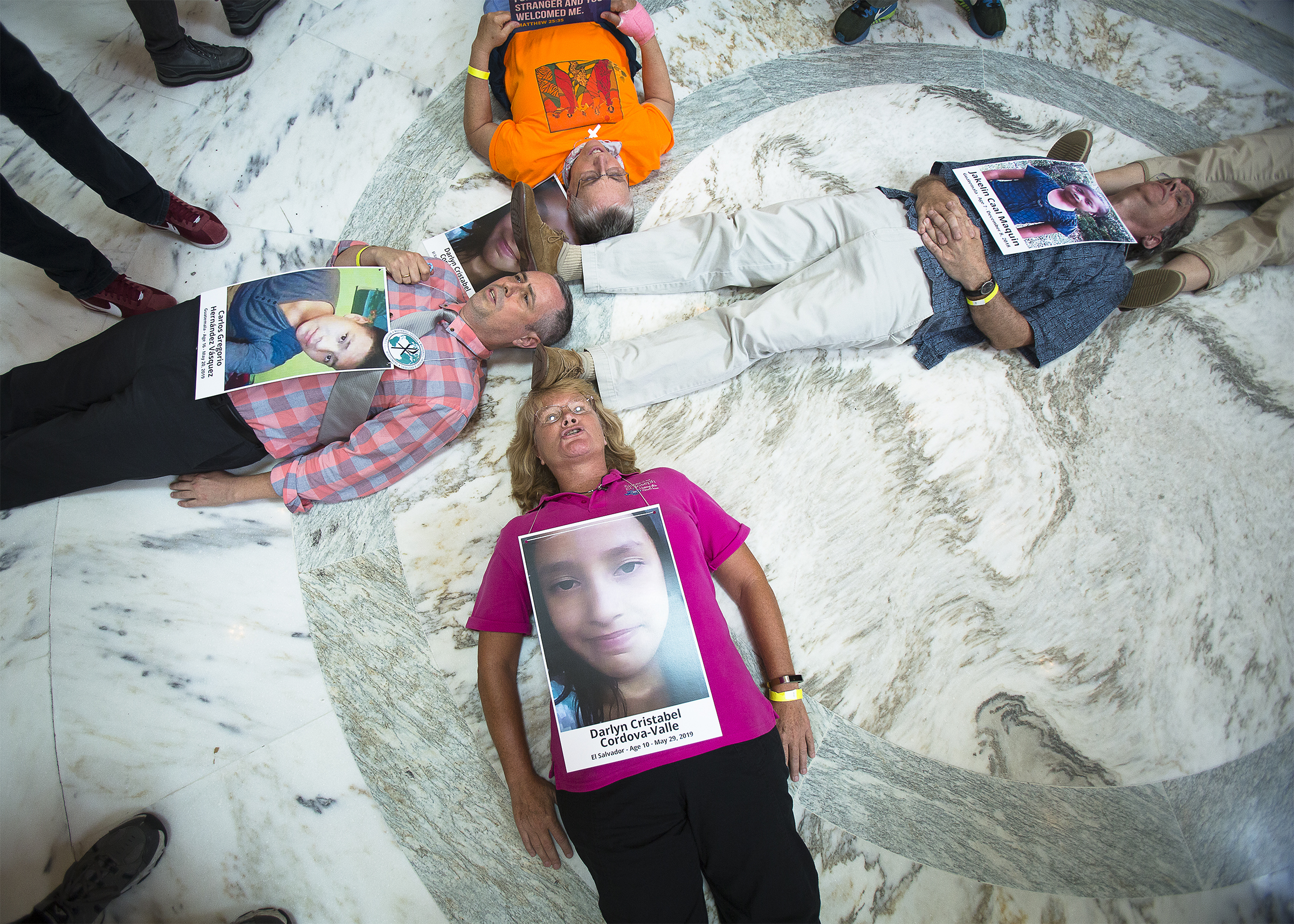 This past July, for the first time in my life, I was arrested.

Alongside 200 other Catholics, I took part in a protest and act of civil disobedience, the Catholic Day of Action for Immigrant Children. There, 70 of us were arrested on charges of "crowding, obstructing, or incommoding" within the rotunda of the Russell Senate Office Building.

The protest was beautiful and heartbreaking: on a sweltering mid-July day, about Catholics from a number of organizations — including a contingent from my workplace, The Catholic University of America, and my father, a CUA Law alumnus — gathered to pray for and express solidarity with migrants along the southern border, particularly the families who have been separated and the children who have died in ICE custody.

Next, most of the group filed into the Russell Building, forming a circle inside its stately marble-columned rotunda. Within a few moments, the U.S. Capitol Police surrounded us, loudly alerting us through blaring megaphones that anyone who did not move out of the rotunda would be arrested.

Standing amidst the singing, praying crowd, I had been nervously waffling over whether to participate in the planned act of civil disobedience, and I still felt doubtful up until the moment that the officer put me and my father in handcuffs. As it happened, we were among the first to get arrested, and so we didn't get to see the rest of the event, which included 90-year-old Mercy Sr. Pat Murphy being led away with her hands behind her back, and a group of protestors lying in the shape of the cross on the floor, with pictures of migrant children resting on their chests.

We were led out of the Capitol building and loaded onto a bus, women on the left and men on the right. Soon, the parked bus was full of longtime Catholic activists, including Catholic Workers, members of the Franciscan Action Network and Sisters of Mercy. I was greeted by my seatmate, a Catholic Worker and antiwar activist who would eventually tell me her life story beginning from the time she was inspired to activism by the actions of Jesuit Fr. Daniel Berrigan and the Catonsville Nine. Like her, many in the crowd were baby-boomers, but there were millennials and GenXers there as well.

After about an hour, the bus departed the Capitol and drove to a processing center in an industrial garage a few minutes away. At that point, the arrest came to resemble a bizarre trip to the DMV — we sat, still handcuffed, on metal folding chairs inside the garage, and waited while a couple dozen police officers milled around, sorting out our personal effects and processing all of the paperwork.

As the hours passed, I had time to reflect on the discomforts I was experiencing: both the physical discomforts of being handcuffed and detained (it's amazing how much one's nose starts to itch as soon as one becomes unable to scratch it), and the psychological discomfort of breaking a law (no matter how minor) and having an arrest record that will stay with me as I go through life.

These discomforts felt unusual and even scary for me, a native-born U.S. citizen and a white woman in America who has never gotten more than a traffic ticket. And yet that day was probably the closest I will come to experiencing any kind of physical solidarity with migrants, no matter how much of a pale imitation my experience was compared to theirs. When I watched my father getting arrested, I thought of the families who have cowered as their fathers and mothers have been led away by ICE; when I was on the bus with the other protestors, I thought of the migrant children being loaded onto busses in the middle of the night; when I was in the fenced industrial garage, I thought of the miserable group of migrants penned behind similar fencing under the bridge in El Paso; and our wait of several hours was a reminder of their endless waiting in detention. 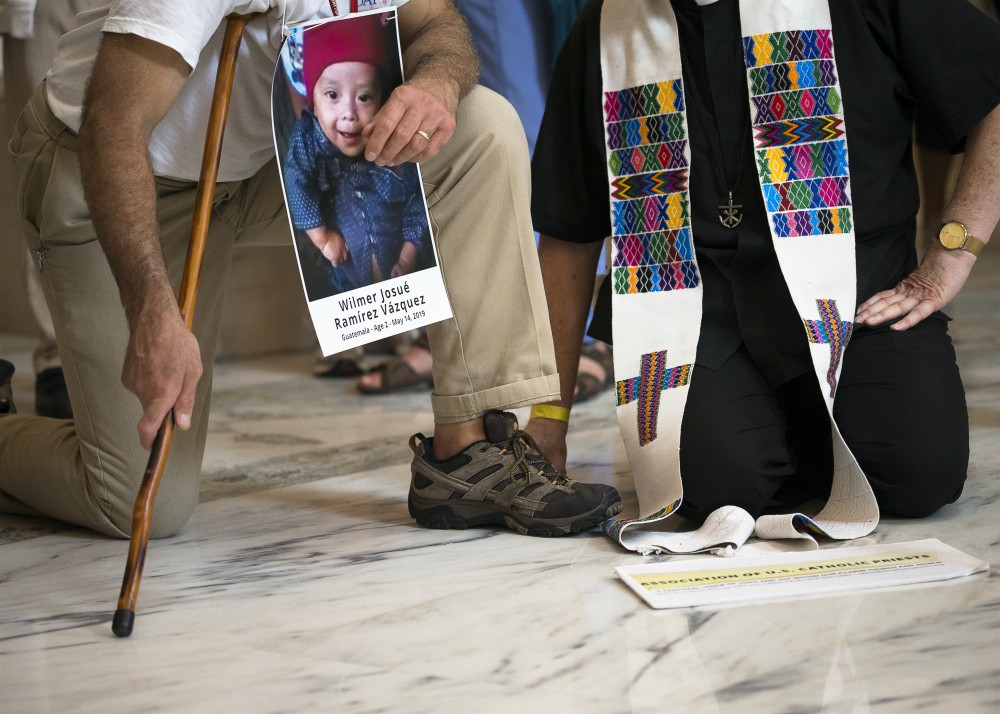 Of course my own minor irritations, my little aches and pains, and my boredom were insignificant next to the sufferings of migrants in detention. In a sense, they are incomparable, since the experience was a far cry from the appalling conditions at U.S. detention centers along the border: the Capitol police were respectful and polite to us throughout the day, offering us bottled water as we waited, turning on fans to keep the air cool and leading us to a relatively clean Port-A-Potty if we needed to use the restroom.

Yet nevertheless, as I sat with my own discomfort and my fear, I kept thinking of one of the nuns in my primary school, who would tell us, whenever we complained about anything, to "offer it up." Was it presumptuous, I wondered, to offer up my (comparatively very minor) pain and suffering that day on behalf the migrants suffering in the United States? I'm sure it was — but that is what I had to offer, and so I did.

I thought also about what this experience meant to my own Catholic faith. As Catholic writer and activist John Gehring (who was also arrested at the Solidarity with Immigrants event) has written, there is a long tradition of Catholic activism, particularly civil disobedience, in the United States and around the world. Here it was in the flesh, and I found it indescribably inspiring. An image that will stay with me from that day was that of six elderly, handcuffed Sisters of Mercy, seated in a row in front of the uniformed Capitol police as they waited to sign their Notice to Appear in Court forms. MERCY, MERCY, MERCY, MERCY, MERCY, MERCY read the backs of their purple t-shirts — and that is what I prayed for as I looked at them.

I was released about three hours after my arrest. (My father, a stubborn defense lawyer, refused to pay his bail — "I wasn't breaking any laws" — and was released a few hours later, with a court date.)

Back outside under the hot Washington sun, I was flooded with a sense of relief at being free to go home to my husband and children — a feeling entirely disproportionate to the time I had spent away from home, no more than I would have on a normal work day. Once more I thought of migrants in detention, and the videos I have seen of migrant children being reunited with their parents after months of separation.

Several weeks later, I find myself reflecting on the purpose of my arrest. Was it, as one critical friend charged, merely an extreme type of virtue-signaling? Perhaps this was a way for me to show all my friends and colleagues what a progressive, tolerant person I am, without actually doing anything to change the law or conditions at the border.

But I don't really believe that. Along with the other 70 protestors, I risked something small but real — my freedom, my clean record — in order to show the world that Catholics reject the inhumanity along the border. As a group, the protestors received messages of support from seven Catholic bishops, and the news of our arrest spread around the world, with media coverage in Nicaragua, Chile, France, the United Kingdom and other countries.

My own university published an article on the event, and colleagues and students there contacted me to tell me that they were inspired by the action and would join me for the next one. That is what our protest was designed to do — to attract the attention of not only the world, but also of other Catholics, and to invite them to step outside of their comfort zones in order to put pressure on the government to end child detention and mistreatment of migrants.

It's true that Catholics are known for marching for life — but we've attracted more attention for our actions in support of the life of the unborn than for our actions in support of all the other forms of life on this planet. Here, we spoke out on behalf of the lives of migrant children. So, at the end of the day, I prayed that events like this will continue, with Catholics everywhere enduring moments of discomfort in order to speak out in the halls of power on behalf of all people who are needy, weak or oppressed.

[Julia G. Young an associate professor at the Catholic University of America. She is a historian of migration, Mexico and Latin America and Catholicism in the Americas.]