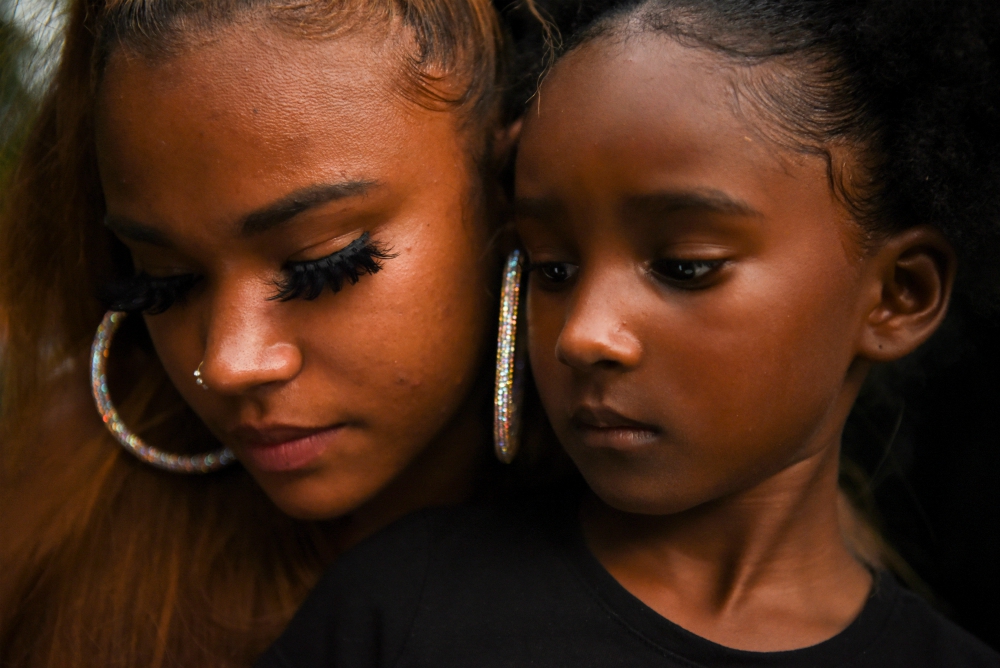 People are seen in Houston June 19. The date, known as Juneteenth, honors the end to slavery in the United States and is considered the longest-running African American holiday. (CNS/Reuters/Callaghan O'Hare)

Over the past few weeks, NCR has given space to various Black scholars and writers, as they have reflected on the current societal challenges of pandemic, police shootings and protest while addressing the systemic racism and violence perpetrated on Black bodies. The voice that has been largely missing from this discourse has been the voices of Black Catholic women, whose pain has been magnified as they witness the death of members of their families, the continued abuse of their sisters, and the systemic racism that has been embedded in our nation for more than 400 years.

As Time magazine reported recently, when Black women and girls like Aiyana Stanly-Jones, Tanisha Anderson, Atatiana Jefferson and Charleena Lyles are killed, it is often out of the public eye and does not make news. The pain of these events within the Black community is often ignored or minimized.

As there has been a George Floyd, there has also been a Breonna Taylor, senselessly shot eight times by police while she was sleeping. We are horrified while viewing the video of George Floyd's murder but do we realize that it was a 17-year-old Black young woman, Darnella Frazier, who recorded the police who killed him? What agony does she continue to endure from this event?

Let us today be open to the words of three Black women scholar-activists as they share their experience and perspective on these times. Their response to the racism evident in our country and in the global world is rooted in their experience of struggle and spirit. Many times, their voices have been crying out in the wilderness to a society that does not wish to hear or see. Now is the time to remove the veil. What insight can they give as we all continue to journey in lament and hope?

Historically no one could hear, protect or defend Black women, as they were brutalized, maimed and raped by those who had legal although illegitimate jurisdiction over the bodies of our African matriarchal ancestors.

Generations later, attacks on the bodies of Black women continue. This also occurs in the unjustified challenges to the Black feminine voice. The breaking of their bodies and shedding of their blood by police force and brutality often ends in loss of the very sanctity of life and dignity of the human womanist life force. It is the killing of the Imago Dei in the feminine spirit — the Black matrix, the fertile seedbed that is the source of all Black life. Why should this matter?

It matters because it is about the aborted life of Black women and girls — cut short by the injustices and methodical dehumanization of us — simply for voicing and being!

There is destruction and genocidal attacks on Black lives — at the hands of disordered policing, disparity in health care at the time of COVID-19, and the massive mortality rates of Black women's lives when they enter hospitals to give birth. The ephemeral nature of our lives is ignored.

My social location as a pastoral theologian, social justice advocate and healer is influenced by the necessity of speaking out and being heard. A voice crying out in the wilderness. "We are in pain. Do not our Black lives matter?"

How did I get here? As an 18-year-old female in Jersey City, New Jersey, I watched as a 14-year-old female, Andrea Bell, was beat down to the ground and dragged into an unmarked cruiser by two plainclothes policemen. What was her offense? She chose to voice her displeasure of being told to move from the bus stop. She was acting in her own agency and speaking out that we were not doing anything wrong and should not have to move.

The policemen did not identify themselves. They were unaware that we were children of police officers, on our way home from our Catholic school basketball tournaments. The threat was clear that if we intervened, we too would get the same treatment.

Yet I did intervene — my voice at an Internal Affairs Bureau investigation led to the sanctioning of the police officers. A few days of lost pay and vacation time was not nearly enough. Yet by 1975 standards, it is a wonder that any action was taken. I realized then the vital nature of being a voice for the defenseless.

It is that same voice that challenges racism in my profession of health care. As a patient in my very own obstetrical clinical department in 1996, I experienced the indignity of being ignored when I cried out in agony that I was hemorrhaging after a premature birth. Like Serena, my voice was not heard at a time when I could not advocate for myself.

My unbridled tongue challenges the inequities that threaten our lives and dismiss our right to voice our truth! It is the voice that even challenges Mother Church for not always being such an alma mater, "good mother," to her Black Catholic parishioners and the Black community at large.

The litany of names of abused and martyred Black and Brown sisters, daughters and mothers is endless, yet we must call their names and be their voices. It is scriptural that the atrocities against the Dinahs and Susannas of our society be dealt with in an equitable and just manner (Genesis: 34:1-7; Daniel 13).

Darnella Frazier was the 17-year-old who saw the police doing something she felt she had to document. Her footage of George Floyd's last moments has been critical in bringing charges against the police and in launching a worldwide movement. She stood with holy boldness. I call her name for not letting Mr. Floyd die in anonymity. Her fierce voice cried out!

The charism of the Caldwell Dominicans Sisters of St. Dominic is Veritas: proclaim the truth always. As a lay associate of the Order of Preachers, I am compelled to voice the truth when it is convenient and inconvenient.

"The Lord asks, what have you done? Listen! Your sisters' and brothers' Black blood cries out from the earth" (Genesis 4:10).

Read this next: Black lives matter in the worshipping church