"When the Pope thinks, it is God who is thinking in him."
—Louis Veuillot

"I should like a new Papal Bull every morning with my Times at breakfast."
—William George Ward

These two quotations seem shocking today, and were, in fact, shocking to many in their own time; they come from two 19th-century journalists Louis Veuillot and William George Ward. Veuillot, Ward, and others were at the vanguard of a theological, cultural and political movement within the Roman Catholic Church named "ultramontanism" — "over-the-mountain-ism."

Ultramontanism looked over the Alps that separated Germany, France, Ireland and England from the pope in Rome, promoting him and a particular theology of the papacy as a bulwark against Enlightenment rationalism and the forces of change in the 19th century.

The ultramontanist movement was diverse, decentralized, youthful — and successful, encouraged by the first celebrity pope, Pope Pius IX, and culminating in the definitions of papal primacy and infallibility of the First Vatican Council.

Arguably the ultramontanist movement made the modern papacy that we know today.

Most Catholics can recognize the pope immediately; the pope appoints bishops for every diocese in the world; papal encyclicals and other documents are published frequently and read widely; and seven out of the ten popes beginning with Pius IX have been canonized, beatified, or set on the path toward canonization — making Pius X, John XXIII, John Paul II, and, this fall, Paul VI, the most recent popes since Pius V was canonized in 1712.

In recently reading Vatican I: The Council and the Making of the Ultramontane Church, Jesuit historian Fr. John O'Malley's newest book on Vatican I, including his survey of the ultramontanist movement in 19th-century Europe, the parallels between these ultramontanist thinkers and authors and those I would name the "new ultramontanists" of today were striking.

Who are the new ultramontanists? As in the 19th century, the movement is diverse, difficult to categorize, and susceptible to overstatement or stereotype. But in the family of thinkers from the conservative Catholic public intellectuals like Ross Douthat and Matthew Schmitz, to the more bombastic, Veuillot-like tirades of "rad-trads" and others on Catholic Twitter, one can see some fascinating parallels between the 19th century and our own.

First, in both periods it was journalists who promoted these views with the most energy and effectiveness, rather than academic theologians or even, at first, most clerics or bishops. Veuillot used his journal L'Univers and William George Ward the Dublin Review; Veuillot at least was regularly in conflict with the Archbishop of Paris. Along with them, La Civiltà Cattolica, now known for its wide-ranging centrism, was first established by the Jesuits as an ultramontanist mouthpiece.

Today's ultramontanists similarly disseminate their ideas not through the pulpit or the academy, but primarily through First Things, The New York Times, and the Catholic blogosphere and Twitter. They have a much wider reach than most academic theology will ever have, and yet many theologians would critique the lack of theological education that sometimes leads to simplistic, underdeveloped or simply wrong understandings of ecclesiology or church history.

For many voices on Twitter, their experience of the Catholic Church during the long pontificate of John Paul II is how the church always was, and also how the church ever shall be. And, like the polemics of L'Univers and the earlier incarnation of La Civiltà Cattolica, the vitriol, even violence, directed at institutions and individuals betrays a deep lack of Christian charity "in the service of the truth."

Also similar is the prominence of converts to Roman Catholicism in both times and places. Some converts, like Ward and Henry Manning (later Cardinal Manning), came to the Roman Catholic Church from the Oxford Movement in the Church of England; others, like Veuillot, could best be described as converts from a purely minimal or formal childhood baptism to active life in the Catholic Church.

Similarly, the prominence of converts like Ross Douthat and the late Fr. Richard John Neuhaus among Catholic conservative intellectuals forms an interesting parallel. One must tread carefully here — I would never presume to judge the sincerity of a fellow Catholic's belief. Especially through past ministry with the Rite of Christian Initiation for Adults, I've always rejoiced with new Catholics, not only because they are becoming Catholic, but primarily because it is almost always a graced moment of deeper growth in their relationship with God.

Many voices on Twitter, like that of Veuillot, are "converts" from a nominal or lackadaisical Catholicism of their youth to a full-throated, muscular Catholicism that, going beyond enthusiasm to abusive attacks or commands to "repent and submit to the pope," unfortunately mirrors some of the worst toxic masculinity and lack of charity of other areas of social media.

And that brings me to a third parallel, where it seems that the label "ultramontanist" is a bad fit. Those I have termed the "new ultramontanists" aren't particularly fans of Pope Francis.

In intellectually sophisticated pieces like editorials in First Things or in Douthat's book To Change the Church: Pope Francis and the Future of Catholicism, or in far less informed diatribes directed at Francis, cardinals or bishops like those regularly propagated by websites like LifeSiteNews and Church Militant, Francis' actions and teaching are met with unease, disagreement and sometimes active dissent. The Aug. 2 announcement of the modification of the Catechism of the Catholic Church to declare the death penalty "inadmissible" further raised a howl of anti-Francis noise, especially among U.S. Catholics whose political support for the death penalty seems increasingly in contradiction to authoritative teaching.

The missing link that connects the two movements is not support for a particular papacy, but opposition to change. Reading O'Malley's book and re-reading some of the primary sources, on one hand, while keeping Twitter open on my computer on the other, has underlined more clearly for me that, both in the 19th century and today, the possibility of the church changing is the monster hiding under the bed, or the pew, for many of these thinkers. 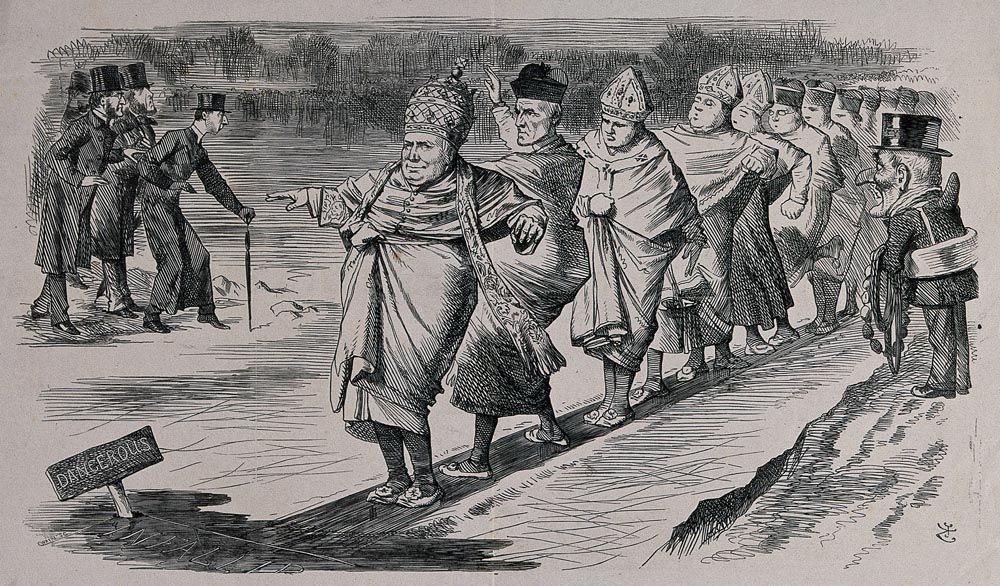 That the church changes — the "dirty little secret" as Garry Wills named it in the 1970s and as Jesuit Fr. Mark Massa revived it in his study of 1960s Catholicism — would be a contradiction in terms for both Veuillot and his contemporary equivalents. This may explain some of the parallels.

Any theologian or church historian knows just how often and radically the church has changed in the past, knowledge that some further reading in theology might benefit the average rad-trad on Facebook.

John Noonan's magisterial A Church That Can and Cannot Change: The Development of Catholic Moral Teaching is just the most thorough treatment of how in relation to slavery, usury and marriage church teaching on morals has changed, sometimes radically, in the past. And for those converts to Catholicism for whom the conservatism and stability of the era of John Paul II and Benedict XVI was the refuge to which they fled from the upheavals and relativism of the past forty years, this new experience of development, however minor or gradual in the wider horizons of church history, will be a profound test of faith.

But if I'm correct, and the real heart of ultramontanism, new and old, is not simply the papacy, but how to understand the historical reality of the church, then we're in for a bumpy ride.

Those of us who may have thought that the issue of the historical nature of the church was settled at the Second Vatican Council should be alerted out of our complacency to speak and teach about the phenomenon of ecclesial change. And we ought to remember that it was Veuillot and Ward who won the day through their skillful use of media, not the Archbishop of Paris or the theological elites who argued with them in theological journals.

The youthful populism of earlier ultramontanism warns us against dismissing similar movements today, particularly in relation to the world of upheaval and uncertainty threatening many educated, indebted and economically vulnerable young Catholics.

And yet, as John Henry Newman famously wrote, "To live is to change, and to be perfect is to have changed often." Continuing to share the good news of the life of the church, a life that involves change, is one additional task for theologians and church leaders for this time in our history.

[Brian Flanagan is associate professor of theology at Marymount University in Arlington, Virginia. He is the author of Stumbling in Holiness: Sin and Sanctity in the Church, to be published this September by Liturgical Press, and a contributor to the blog www.dailytheology.org.]

A version of this story appeared in the Oct 5-18, 2018 print issue under the headline: The new ultramontanists: Why do some Catholics fear change?.