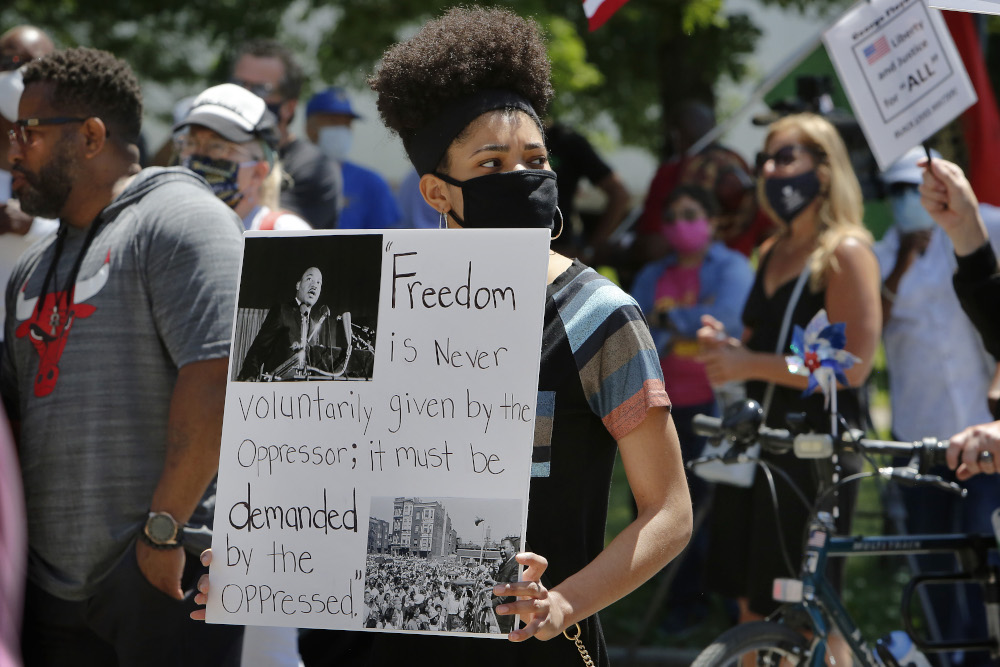 The continual oppression and injustice destroying Black communities since 1619 is a national health crisis that has now risen to a state of emergency. The list of murdered Black Americans is endless. Recent additions include:

W.E.B. DuBois issued this quote in his book, The Souls of Black Folk. As seen by the statements of Robert F. Kennedy, in 1968 the number one domestic problem in America was the race problem. In 2020, this is still a problem as injustice abounds. The race problems surpass the global pandemic that caused the deaths of more than 120,000 in five months in longevity, scope and the amount of people affected. COVID-19 has a cure in progress, what cure is there for systemic racism and injustice?

We hunger for justice

You cannot delay feeding your child when they are hungry; you can't delay immediate justice to those who are in need for it. Today, I have many friends who are asking, "But could the people wait while the investigation runs its course?" Injustice is like starvation — when you are angry, you do not know how to reason. Survival instincts always win. As the Rev. Martin Luther King Jr. said in his letter from Alabama, "You may well ask, 'Why direct action? Why sit-ins, marches, etc.? Isn't negotiation a better path?' You are exactly right in your call for negotiation. Indeed, this is the purpose of direct action."

Many have experienced hunger, but as someone who was born in a third world country, let me tell you, the attitude of someone who is hungry is different from someone who is not. Only when you are lacking a primary need, you will know its importance. Enjoying your privilege does not give you license to criticize or judge those who are in need. In fact, having privilege without a moral conscience leads you down a perverse path. It is important that one knows where they come from and what leads them to where they are. Black people who are crying in the streets for justice were never in privileged positions. As James Baldwin wrote in The Evidence of Things Not Seen, "The White man, someone told me, discovered the Cross by way of the Bible, but the Black man discovered the Bible by way of the Cross."

You might be hungry once or twice, but you are not starving. You already know where you are going to find food. But for those who might not even have a fridge, or have food to put in it, that might be the most severe hunger that they have had to experience.

At one point in my childhood, my mom and dad had fallen on hard times financially. I was a kid, yet I remember my mother always saying that it was a tough time for them to feed us daily. Somedays, we had to go to bed with nothing, we only drank a glass of sugar water and ate a piece of bread. That was dinner. As Baldwin says clearly in Another Country, "the occurrence of an event is not the same thing as knowing what it is that one has lived through." Today, this is the reason why people are in the street: they are starving, begging for justice because they know what it is like to live without it.

Many are familiar with being "hangry." The Black community has been hangry for some time, and are ready to be fed. One of the reasons white people can't seem to fathom the Black community's desire for justice is because they subconsciously know that the oppression of Black people protects their privilege. As Baldwin eloquently mentions in The Fire Next Door, "I imagine the reasons people cling to their hates so stubbornly is because these senses, once hate is gone, they will be forced to deal with pain." The epidemic of racism is more contagious than the pandemic of COVID-19 in America.

People ask why Black people cannot wait. We have been waiting in America for more than 400 years.

People ask why Black people cannot wait. We have been waiting in America for more than 400 years. Anger is rising and patience is wearing thin because as King remarked, "Perhaps it is easy for those who have never felt the stinging darts of [police violence] to say wait." He continues to say, "when you have seen hate-filled policemen curse, kick, brutalize and even kill your black brothers and sisters with impunity … then you will understand why we find it difficult to wait." Black people are tired of waiting.

All Christians should feel a moral obligation to fight for justice. My church sometimes remains complacent in the eyes of this social sin. Despite our nice chandelier, beautiful candle, I often wonder if there is enough light in the Catholic Church for white people to be able to see Black people and understand the injustice that they have to go through in a daily basis.

Black people in America are dying with a thirst to be seen and to be heard. When people are hungry for justice, when Black people have a sense of helplessness, when they feel that they have nothing to lose, they will be ready to go all in, just to find a simple natural food: justice. Today, we are all challenged by the Black community in our country that is yearning for justice. They remind us that our complacency can cost us much more than our insensitivity to the problem.

The killing of George Floyd by the police in Minneapolis is a clear lesson that shows how America is amplifying the destructive power of injustice. It is also apparent that this country has not yet learned its lesson. Those days and nights of protest we are having are not just about George Floyd's killing, rather they are about what his death symbolizes, the freedom to violate Black bodies with impunity.

If you are blind to racial injustice, be prepared to have your eyes be opened by visible death of Black men and women in America. They are invisibly bleeding and dying in the room, begging for justice.

[Patrick Saint-Jean is in Jesuit formation at Creighton University in Omaha, Nebraska, where he teaches in the psychology department. He graduated from École Lacanienne de pscanalyste in France, earned a master's and master of divinity at Catholic Theological Union. He is a member of the Midwest Province of the Society of Jesus.]