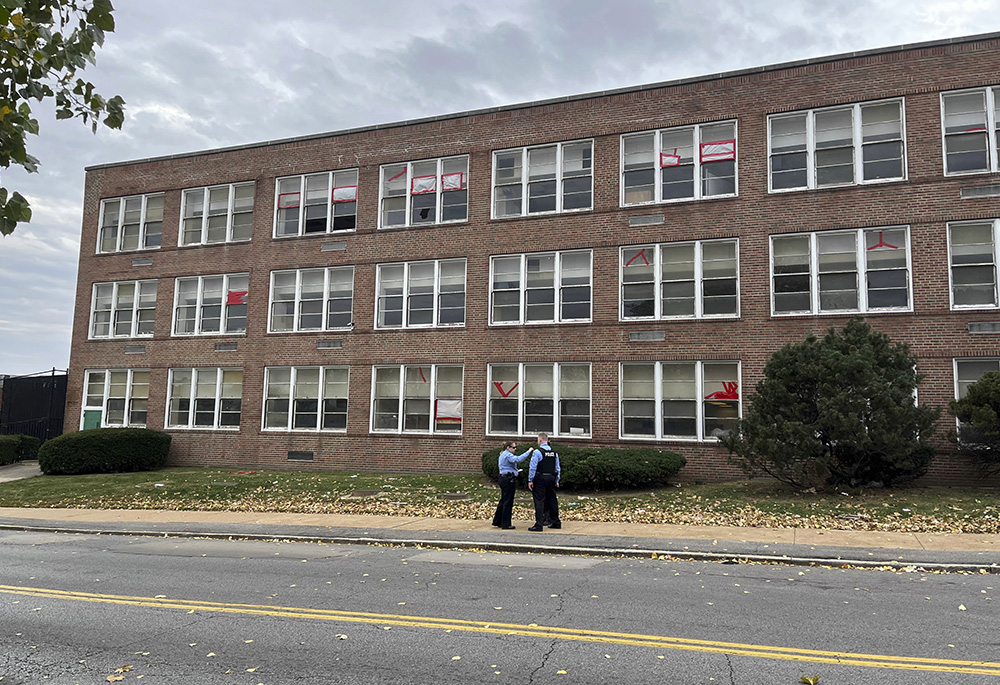 The outside of Central Visual and Performing Arts High School in St. Louis, on Oct. 24. A fatal shooting just after 9 a.m. at the high school forced students to barricade doors and huddle in classroom corners, jump from windows and run out of the building to seek safety. (AP photo/Michael Phillis)

"There is a lockdown right now. It's not a drill, I don't think. I hear yelling. I love you all so much." My wife and I received this text message from our 17-year-old daughter at 9:12 a.m. (CST) on Monday, the 24th of October. She is a senior at Collegiate School of Medicine and Bioscience, which shares a building and facilities with Central Visual and Performing Arts, in St. Louis, Missouri. However, it was 3:12 p.m. for us, because in August we moved to Ireland, in part because of our increasing concerns about gun violence in St. Louis and elsewhere in the United States.

We had finally purchased a car and were having a late lunch when a former neighbor who lives a block away from our daughter's school called my wife and told her that something dire was happening. That's when we noticed our daughter's text message. It was now 3:25. My wife texted our daughter: "I love you!!! ... Text me asap. Where are you???"

Our daughter immediately replied, "We're in AP Lit. In the basement. The door is barricaded." She added, "Lots of yelling and screaming but no gunfire." We told her how much we love her. The staff in the restaurant noticed that there was something wrong, so I told them what was happening. They took us to a private room, sat with us and were obviously stunned that something like this was transpiring in real time.

Over the last two months, whenever my wife, our 12-year-old daughter who moved with us, and I described to our Irish friends how we regularly heard gunfire when we lived in downtown St. Louis (I sometimes videoed gunfights on the streets several floors below our apartment, and I would photograph bullet casings I would happen upon during my daily runs), they could not fathom it.

There are more guns than there are people in the United States. In contrast, in Ireland, which has a population of just over 5 million people, there are only around 200,000 licensed gun owners, and most of these firearms are shotguns rather than rifles or handguns. Even the Irish police, the An Garda Síochána, are mostly unarmed, with only 20-25% of them trained and qualified to use firearms.

It's been refreshing not to hear gunfire here or to worry about armed robbers and violent road rage here. As a former law enforcement officer myself, it has been pleasant to not feel the need to sit in a restaurant or another public venue in a spot where I could see any possible threat and know where the exits are. We are so happy that our 12-year-old daughter can safely ride her bicycle around town with her friends or alone, without our supervision.

Our 17-year-old daughter stayed in St. Louis to finish high school in December, a semester early, rather than move right away with us to Ireland where she would have had to do two more years of secondary school. She is an advanced student, and she's ready to go to university. She is staying with the family of a classmate, one of her best friends over the years.

Her high school is one of the most secure in St. Louis. There are metal detectors, the doors are locked, and there are several security officers. We believed that she would be all right for these few months, although of course we have missed her dearly and have been worried about her. It was homecoming just the week prior, and the photos of her smiling with her friends reassured us.

We continued texting over the next three minutes. Everything seemed to be moving in slow motion. The worst fears swept through my wife's and my minds. At 3:29, our daughter wrote, "I can see police through the window. Four shots just went off." She said she hears more sirens. I asked if she is behind a desk and has anything to throw at the shooter. I wondered if she could escape through a window, but she replied that there are bars on the windows. She then heard the police yelling at the shooter. It was now 9:33 there, 3:33 in Ireland. The six-hour difference in time, and the 3,897 miles separating us, intensified our sense of helplessness.

A minute later, our daughter updated us, "The police are coming door to door to evacuate kids." Three long and uncomfortably silent minutes later, we read, "We're out." Our daughter reported that she saw a dead student, 15-year-old Alexandria Bell, in the hall. My daughter will never forget it.

I have seen gunshot victims. My wife has seen too many herself as an ICU nurse at SSM St. Louis University Hospital, where the military would send medical personnel to get experience treating gunshot injuries and trauma. They would call St. Louis "little Fallujah." Nobody should see what we have seen, least of all our 17-year-old daughter.

In addition to the two persons — student Alexandria Bell and 61-year-old teacher Jean Kuczka — whom the 19-year-old shooter murdered and the seven others who were injured that day, our daughter, her classmates, the teachers, administrators and staff were forever scarred. Their families were traumatized, too.

This was the 40th school shooting in the United States of 2022. That's basically one per week, and it doesn’t include the many lockdowns that happen even when it turns out to be a false alarm. Indeed, since the Columbine school shooting in 1999, over 311,000 children have been exposed to gun violence in their schools.

Our 12-year-old daughter's school here in Ireland doesn't do active shooter drills. There are no metal detectors at its entrance. The doors aren't locked. It's a strange but welcome experience when my wife and I visit her school. Although no place is perfect, and dangerous threats can arise anywhere, we now feel more freedom from the likelihood of violence, as well as for human flourishing, for family and for community.

Yes, we have wonderful friends back in St. Louis and the United States, many who have generously offered their love and support for us these past several days. I wish, though, that they too could experience the sense of safety and security we have living in a place without so damned many guns, especially ones that were meant for war, not sport or self-defense.

The shooter in St. Louis used an AR-15 style rifle and had several high-capacity magazines with over 600 rounds. He planned to kill many more persons on that day. Nearly 98% of mass shootings are committed by males, many who are experiencing mental health crises and, for this shooter, loneliness and alienation from others.

They do so with legally purchased AR-15-style semi-automatic rifles, commonly referred to as "assault rifles" even though the "AR" originally referred to its first manufacturer ArmaLite (Colt now owns and uses the AR-15 trademark while other manufacturers make AR-15 style rifles). In fact, Eugene Stoner intentionally designed the AR-15 to replace the M14 rifle during the Vietnam War.

Although I have been critical of cases of excessive force by the St. Louis Metropolitan Police Department over the past several years, I am relieved that its police officers, unlike those in Uvalde, Texas, earlier this year, promptly responded and bravely engaged the shooter, stopping him from killing others. Of course, one death is too many, and I am sad that the shooter, too, died. As the U.S. bishops stated in their 1983 pastoral, "The Challenge of Peace," regarding the justified killing of an attacker, "the possibility of taking even one human life is a prospect we should consider in fear and trembling."

Politicians, such as Missouri's Gov. Mike Parson and Sen. Josh Hawley, instead of simply repeating again and again their thoughts and prayers for the victims and their families, seriously need to consider reasonable gun control proposals. There absolutely is no reason why a military grade rifle and ammunition should be as easy to purchase by a 19-year-old as a car or case of beer. I am not trying to politicize this issue. It is a moral issue, indeed a pro-life one at that.

As a Catholic theologian, while I would prefer that there were no guns at all, as a former law enforcement officer, I have owned guns over the years and have known friends and neighbors who were responsible and careful with their firearms. An Irish police officer recently told me how she, like most Garda here, is not comfortable with firearms, and that is how I used to feel about having and carrying one.

Still, too many Americans own guns, and too many of them misinterpret the Second Amendment as an absolute right. Any attempt to ban all guns will only confirm their fearful assertions about liberal government overreach.

I must believe, though, that most Americans find themselves somewhere between the extremes of gun libertarianism and gun abolitionism. For now, we need to find some common ground upon which we construct some consequential policies to safeguard our children and their schools.

We foresee that these incidents will probably happen. If we do not take reasonable measures to minimize them, we as a nation are morally culpable.

Protection is the top reason given by Americans for owning guns. Yet there are almost 40,000 intentional and unintentional gun deaths annually, with roughly 90 daily and 10 of them being children, and around two-thirds of these gun deaths are suicides. If protection is the reason for having a gun, and if firearms are instead doing more harm than good, then we need to reconsider them.

As I noted in a previous article in these pages just over a year ago, in his treatise "On Evil," St. Thomas Aquinas considered a scenario in which a branch falls and kills someone as a consequence of a woodcutter's chopping a tree in a forest. If the forest is not regularly traversed by persons, no moral blame is attributed to the lumberjack. The victim's death is unintended, even if it is a foreseen as a remote possibility. However, if the forest is regularly traveled by people, the woodcutter is morally culpable. We are morally responsible for unintentional effects if these are foreseen as probable or certain.

Our failure to address and reduce the number of gun deaths, even more so in the wake of one school shooting after another, in which our children are injured, killed and traumatized, reveals a cultural, callous disregard for life. We foresee that these incidents will probably happen. If we do not take reasonable measures to minimize them, we as a nation are morally culpable.

When our 17-year-old daughter wrote "We're out," my wife and I felt so relieved. But since then she has shared with us more details of what she heard and saw, most of it not reported in the media. It's horrifying. We're not OK with that. I hope that my fellow American citizens, including those who are Catholics like me, will find a way to break out of this collective death wish and nightmare.