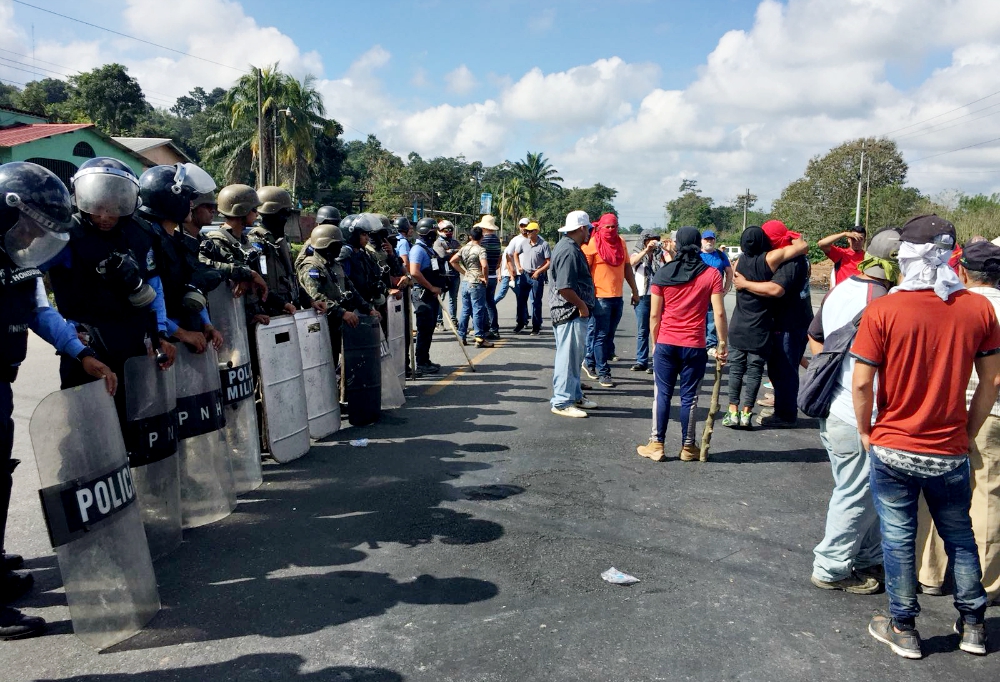 A highway standoff between the military and residents of Puller, north of El Progreso, Honduras (Tom Webb)

Tom Webb is traveling with an ecumenical delegation to San Pedro Sula, Honduras, Jan. 24-30 to witness the repression against peaceful demonstrations to the recent presidential election. NCR will continue to have reports from the delegation in the coming days.

In the aftermath of the allegedly fraudulent presidential election in November 2017, Hondurans have become accustomed to living under military rule.

Juan Orlando Hernández was inaugurated to a second term in office Jan. 27 in a heavily guarded ceremony in the National Stadium in Tegucigalpa. On that same day, several delegates from an interfaith group of Americans who journeyed to Honduras to accompany our Honduran brothers and sisters during this time of darkness joined with reporters from Radio Progreso to examine firsthand how this tense country might fare.

We accompanied four teams of reporters to points around El Progreso and San Pedro Sula to observe and speak to local residents.

What we found were generally a few scattered acts of protest that were met with a more tentative response from the military battalions. In Puller, north of El Progreso, we witnessed a small dirt road blocked by a burning log and palm fronds. As part of a weeklong strike to protest the election, the fire was intended to dissuade workers from going to their jobs at the Hondupalma factory in the rural community Aldea La 36. While some 100 villagers from the small rural community hovered around the smoking fire, there was no police response. But the protesters' tactics proved successful as a caravan of cars and trucks idled on the road with no way to enter. 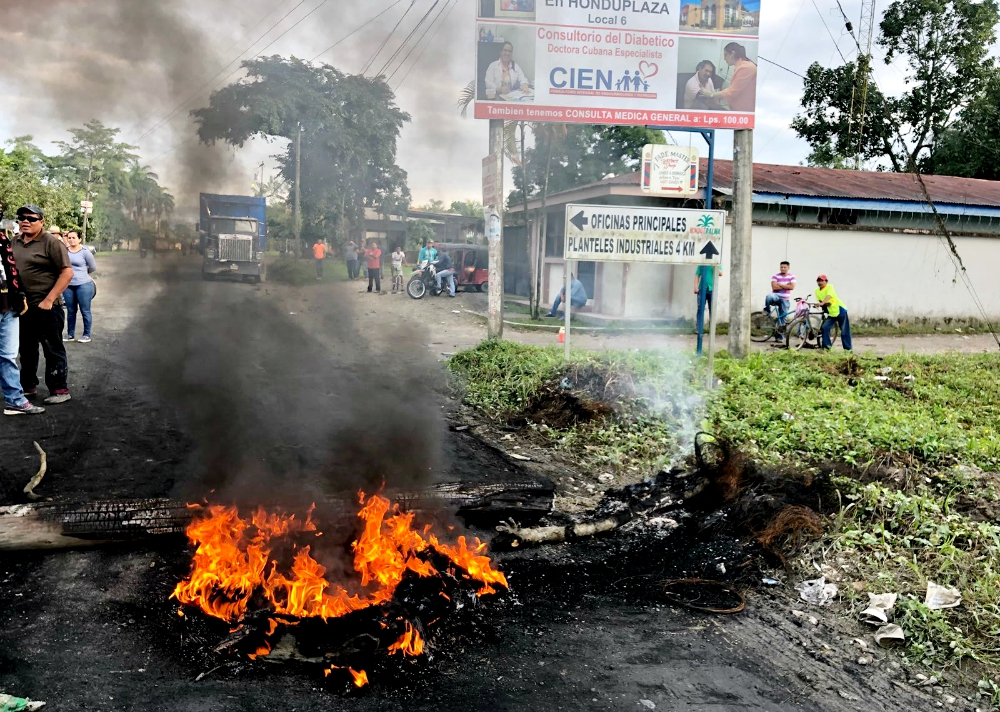 A road fire in in the Honduran community Aldea La 36 blocks workers from their jobs at the Hondupalma factory. (Tom Webb)

A half-hour later, we returned to the main highway about a mile from the village. When we first arrived, a small group of young but heavily armed military police and soldiers were parked on the side of the road. By the time we returned, their presence had grown to approximately 35. They were armed with tear gas and automatic weapons.

About 25 youth, women and older campesinos slowly walked to the intersection of the highway and the road to Aldea La 36. Many of the youth wore masks or covered their faces. They were met by the soldiers. Fortunately, no conflict arose.

The standoff persisted as the villagers walked onto the highway, blocking the southbound lane. The police and soldiers shifted to the center of the road, preventing them from entirely blocking the road. Face-to-face, they stood for nearly two hours, with both lines ebbing and flowing like ocean tides.

At one point, the protesters met and developed a slightly different strategy. They shifted their presence to a point beyond the soldiers. The leader of the military swiftly directed the soldiers and police to re-position themselves so their adversaries could gain no advantage. 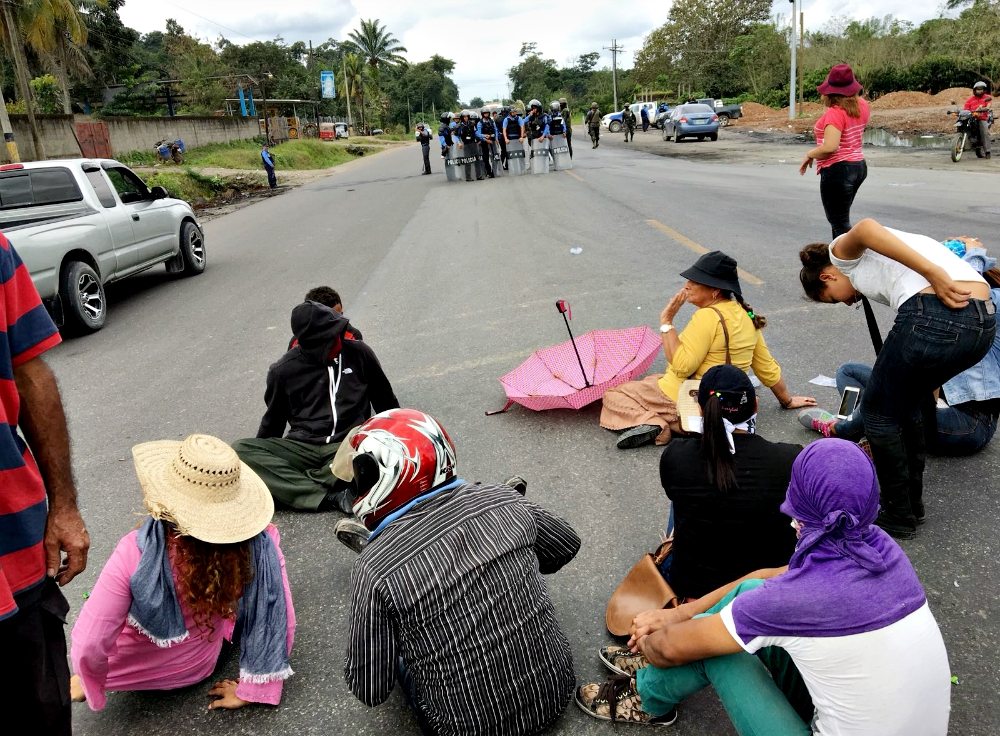 A circle of protesters on the highway forces traffic to pass on the shoulder as police face them nearby. (Tom Webb)

At midmorning, a group of five representatives from the National Commission on Human Rights suddenly drove up. For the next half-hour, they listened and responded quietly to the concerns and complaints of the people standing on the roadway, while soldiers directed traffic by.

After the commission representatives left, a new strategy unfolded. A group of four women and two youths suddenly sat in a circle in the northbound lane, thus blocking traffic on the roadway. The military unit responded by shifting its presence to two separate units, now surrounding those protesting people in positions to the north and south of them. Traffic was now directed to the shoulder of the northbound lane. But again, no conflict or violence ensued.

In the town of Echeverri, south of El Progreso, more dramatic events unfolded. A group of people attempted to block the road. They were immediately dispersed by the military police and soldiers. The police and soldiers walked through the village, randomly tossing tear-gas canisters into people's homes. There was no correlation between those who blocked the roads and the homes that were tear-gassed. 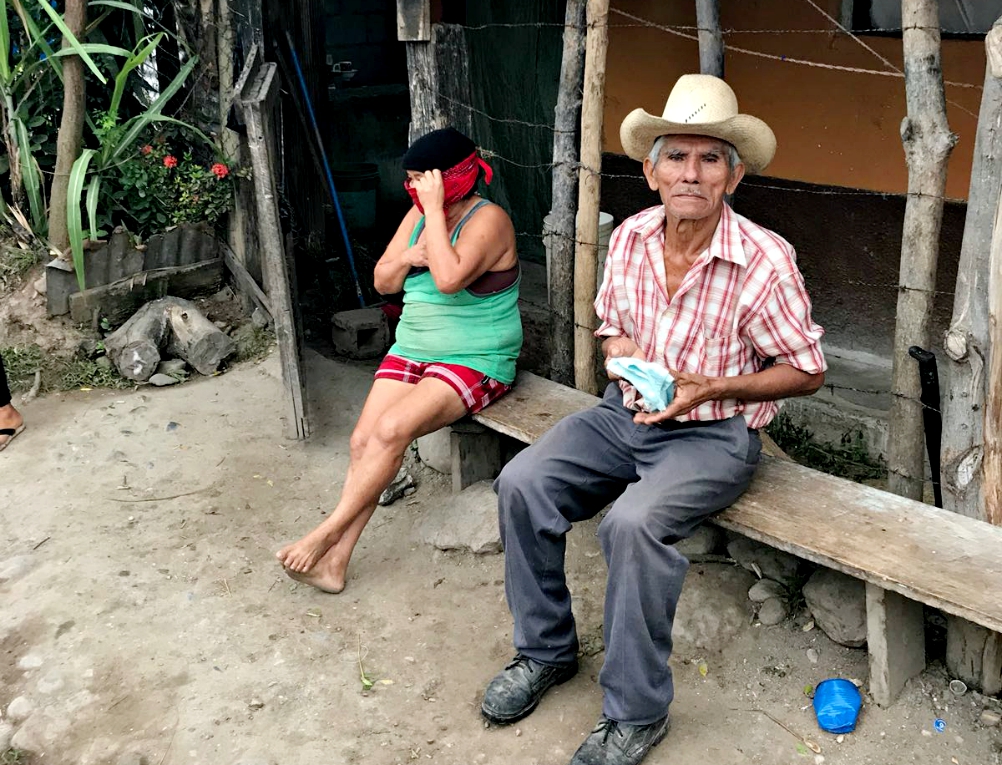 Shortly after, the police detained a taxi driver and a young man on a bicycle. The two had nothing to do with the demonstration. They were questioned and ultimately released.

In the nearby community of Lima, the situation was comparatively calm. A large squad of military police and soldiers was omnipresent. The overwhelming force they represented seemed to dissuade residents of this community from taking any form of political activity. Fifteen to 20 people strolled through the empty streets, taking care of their Saturday morning affairs.

In Toloma, on the outskirts of San Pedro Sula, a similar calm hung over the colonia. The military and police were heavily present at a few intersections. A Pizza Hut lay burned from a more violent conflict earlier last month during the protests.

The tranquility proved deceptive. Upon interviewing people in the colonia, one of our delegates took the testimony of Mario Velásquez. Velásquez explained that he, his sister and his brother-in-law, Cristián, decided to join the protests in Honduras after seeing how their vote was treated.

"We're not part of a political party, but we went to vote," he said. "Then we saw what happened with the elections. We decided to take to the streets. Why bother to vote if they're just going to throw our vote in the trash?"

Choking back tears, Velásquez described the tragedy that befell Cristián soon after they joined the protests.

"We had only been there for about 15 minutes. We had just crossed the road to join some friends, but I heard someone shooting firecrackers and said that maybe we should go. I walked over to try to get my brother-in-law and saw a soldier raise his gun. I thought, 'Is he going to shoot?' I saw him raise his gun and point it into the crowd. Then I saw Cristián fall."

He described how they tried to take Cristián to the hospital, but that the government had instructed hospitals not to treat protesters. By the time they found a clinic that would treat him, he had died.

Government forces "claimed that they're using rubber bullets, but that's a lie," Velásquez said. "They were live bullets, even though no one was armed. I saw them hit kids as young as 8 and hit elderly people. They treated us like animals. We're facing a monster."

Velásquez begged for justice, and for help getting his story out. "They're waging war against us, except we're unarmed," he explained. "We'll go to the end to make sure there's justice in this country."

In a country where a jurisdiction for members of the military has now been organized with its own judges and prosecutors separate from the state, there is no guarantee that military personnel will be held accountable for human rights violations. In this time of intense political polarization and social crisis, the military acts with impunity, protected by the ever-growing, centralized power of the re-elected president.

Related: Being a witness to election aftermath in Honduras

[Tom Webb is a freelance writer and member of the Oakland Catholic Worker community. Kathryn Johnson of American Friends Service Committee in Washington, D.C., interviewed Mario Velásquez and translated his answers for this article.]