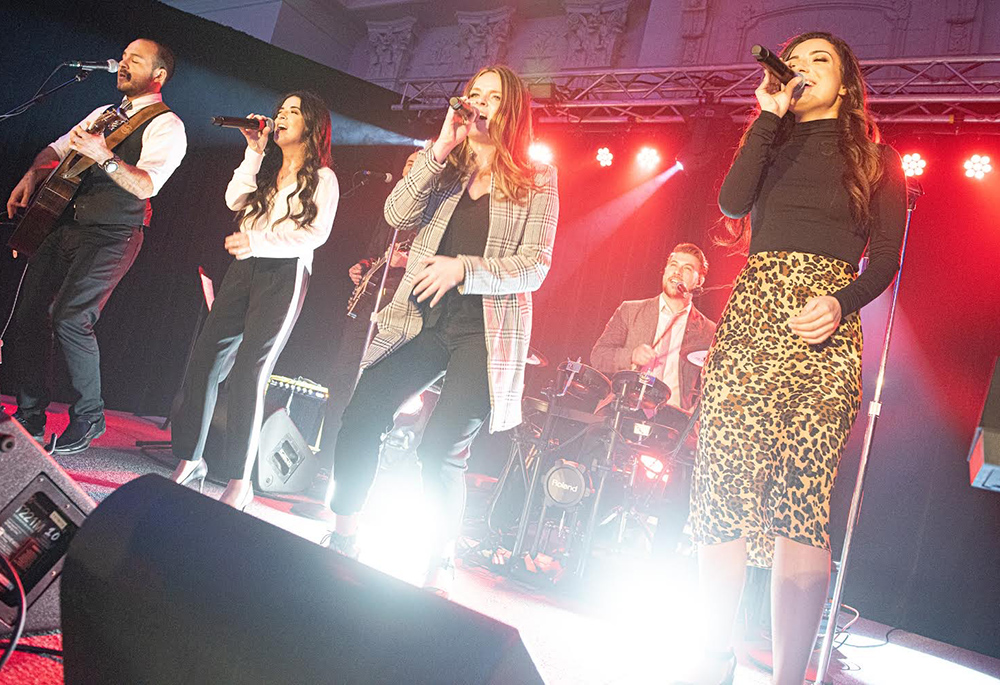 Musicians peform during an Array of Hope event. From left, front row, are Dan Ferrari, Lauren Costabile, Brianne Nealon, and Nicky Costabile; in the back row are Jack Garno on guitar and Jimmy Meier on drums. (Courtesy of Array of Hope/Jeffrey Bruno)

I first met Mario Costabile, executive director of Array of Hope, a few months ago while interviewing him on CatholicTV. My producers gave me a quick rundown on the successful film and music producer and, impressed, I did a Google search on him myself.

After reading about his 40 years of experience producing programs for MTV, Discovery Channel, Yamaha, Sony and more, I was a little nervous to meet and interview him. This may be an unpopular opinion, but I believe that when an individual has achieved a high level of success, it's perfectly reasonable for them to be a bit demanding of everyone around them. Sure, they might be hard on their team or their rookie interviewer (me), but that wouldn't be half as hard as they are on themselves.

I walked into the interview with a clear understanding of my role as "The Little Guy," determined to keep my head down and focus. To my surprise, I was immediately met with a smile and a handshake that didn't even hint at the world of difference between our stations in the media world. Mario's kindness and warmth radiated right off our set and into our viewers' living rooms. He was a hit not only with the camera crew and myself but with everyone who his interview reached. 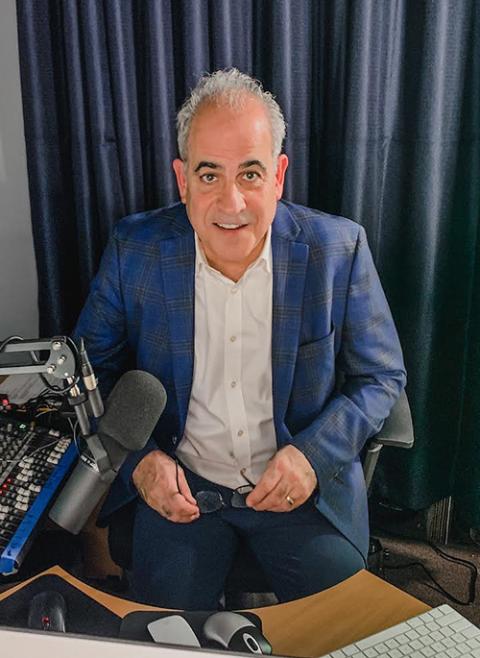 For this interview, Mario and I chatted by video, Mario in his New Jersey office and me on my couch in Boston. I asked him to start at the beginning and so he described his ministry's (a source of contemporary Christian music, films and events) 2010 inception.

"It was launched with the inspiration to try to evangelize like our evangelical brothers and sisters," Mario told me. "At the time, I was working with an evangelical band in Nashville. I was hanging out with a lot of Christian artists and producers down there, including Casting Crowns and Chris Tomlin and Amy Grant. I was blown away by the quality in their work and their ability to convey the faith in an exciting way."

I found myself nodding along as he described finding inspiration from our Christian brothers and sisters. I asked him if he felt that inspiration alone had been the catalyst for leaving a four-decade successful secular career, but he insisted it was more than that, pointing to the Holy Spirit as the changemaker in his life.

"I was successful," he said. "I had a great career, marriage and kids but I still felt a longing. … Something was missing and a sense of true fulfillment was not there yet. I see now that God was preparing me in my secular career for this. God spent my whole life working on my heart and it wasn't until my 50s that I was really ready to begin."

Imagine that? A 40-year career characterized by just as much media success as anyone could ever dream of, and yet it still wasn't even the beginning for him.

In 2010, Mario felt a calling to use his gifts to serve the church.

"I launched Array of Hope and we immediately started doing multimedia concerts in gymnasiums and then it grew to college auditoriums and small theaters," Mario said. "Although the inspiration was evangelical in nature, the events we produce are very Catholic. The Array of Hope concert event is a wide-ranging concert experience that features live musical performances, multimedia displays, motivational talks and thought-provoking film presentations that joyously provide a counterweight to the negative media surrounding today's society. It especially celebrates an appreciation of the family. The show's key themes are the importance of God in the family and the loving support prayer can bring to the spiritual and emotional development of us and our children. This is a perfect family event."

And as his ministry has grown, Array of Hope has only dug deeper into that uniquely Catholic identity.

This is clearly displayed in their upcoming "Behold" events. The series includes live music, multimedia, and talks that draw people into Christ through adoration. The three-night series will work in step with the National Eucharistic Revival, centering around a different theme each night: "The Eucharist and Healing," "The Eucharist and Awe," and "The Eucharist and Communion."

Listening to Mario describe how Array of Hope is balancing the delicacy of adoration with the wham effect of live performance, I asked him how the ministry strikes a balance between beauty and entertainment.

"I think that entertainment is key in drawing the inquisitive viewer in," Mario said. "Array of Hope has always made an effort into bringing people into a fold that is safe, that is fun and that is entertaining. And then we intersperse the teaching of the church into that environment. We start in the entertainment position and then we reveal the beauty. A lot of that happens through witness. We partner up with the Holy Spirit. We can only take them so far, and then the spirit takes over."

Jack Garno, the director of audio and music production at Array of Hope, furthered Mario's sentiments, telling me that the conversion that comes from this ministry isn't just external, it's internal too.

"I grew up a cradle Catholic," Jack said. "I was even an altar server but after some church trauma, I distanced myself."

Years later, Jack met Mario and began playing guitar with Array of Hope. He noticed that everyone involved in the ministry seemed to be aglow with joy and love and asked himself: "What do these people have that I don't have?"

Through Jack's involvement in creating music that evangelizes, he himself was reverted back into the faith. These days he meets with the band twice a week to write songs about the Gospel and, as he so beautifully puts it: "the truth that God is love."