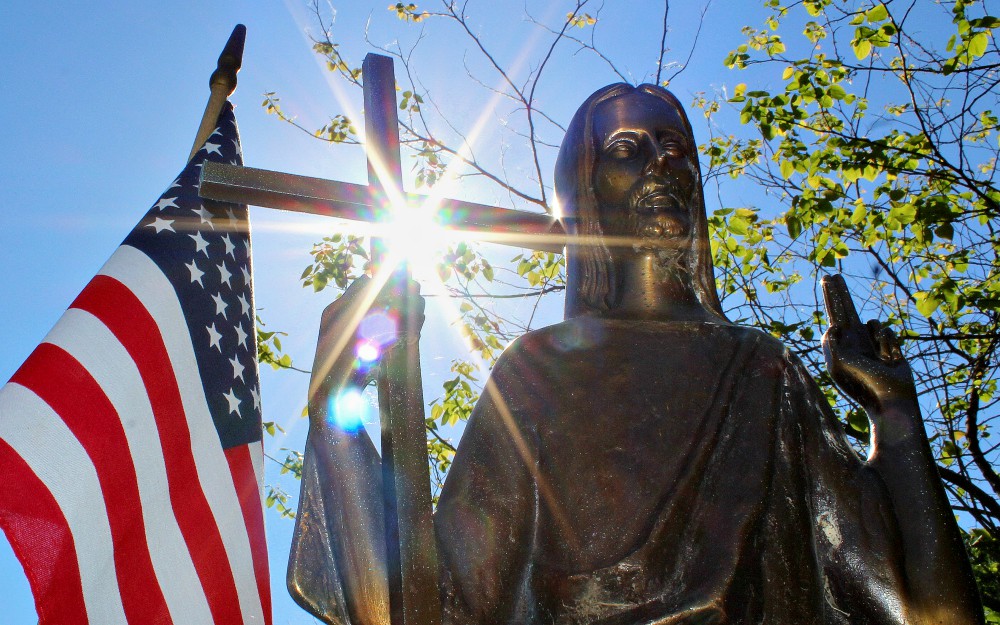 Sun shines through a statue of Christ on a grave marker alongside an American flag at St. Mary Catholic Cemetery in Appleton, Wisconsin. (CNS/Bradley Birkholz)

President Donald Trump's reelection campaign will be framed with a faith-based sales pitch heavy on rank hypocrisy. "The day I took office ... the federal government's war on religion came to a very abrupt end," the president declared at a recent launch of his campaign's "Evangelicals for Trump" coalition.

The idea that a president who sought a Muslim travel ban, uses nativist Christian nationalism to denigrate communities of color, and undermines the rights of LGBTQ people is a defender of religious freedom could be laughable if not for the reality that millions of conservative Christians embrace this fiction. The Trump administration's crass weaponization of religious freedom must be challenged by people of faith who recognize that the religious right does not own this moral high ground.

Not long ago, religious freedom was largely viewed across the ideological and political spectrum as a bedrock value of American democracy that transcended partisan agendas. When the Religious Freedom Restoration Act passed Congress in 1993, Republicans and Democrats rallied to support the legislation.

The act emerged as a response to a controversial 1990 U.S. Supreme Court ruling that upheld the firing of two Native Americans who ingested peyote as part of religious ceremonies. In a five-to-four ruling, the late Justice Antonin Scalia wrote for the majority arguing that granting a religious exemption in conflict of a valid law would "open the prospect of constitutionally required exemptions from civic obligations of almost every conceivable kind."

Those were different days.

Religious freedom debates are now at the epicenter of the culture wars. In state legislatures across the country, GOP lawmakers have tried to pass narrowly defined religious freedom bills that offer sweeping exemptions for faith-based providers, and pit the human rights of LGBTQ people against religious conscience — a false choice that serves neither important value.

At the federal level, the Trump administration created a religious liberty task force housed in the Department of Justice to oversee legal directives on religious liberty cases. "A dangerous movement, undetected by many but real, is now challenging and eroding a great tradition of religious freedom," then-Attorney General Jeff Sessions intoned ominously when announcing the task force.

While the Obama administration sought to expand the definition of equality to include transgender people, Trump is busy dismantling LGBTQ protections. The administration recently proposed a rule that would allow the Department of Health and Human Services to use taxpayers' money to support programs that deny services to people based on religion, sexual orientation and gender identity.

Current Attorney General William Barr, a Catholic, gave a breathless speech that focused heavily on religious freedom at the University of Notre Dame in October. His rhetoric was emblematic of those on the right who view themselves as cultural casualties.

"Secularists, and their allies among the 'progressives,' have marshaled all the force of mass communications, popular culture, the entertainment industry, and academia in an unremitting assault on religion and traditional values," Barr decried.

This scorched-earth style is reminiscent of how Catholic bishops approached the Obama administration, and mirrors the dark tone sometimes found in the U.S. bishops' "Fortnight for Freedom" campaign, which has evoked Christian martyrs of past centuries in the same breath as contemporary policy disputes over health care and other issues in a pluralistic democracy.

As Catholics, we have a rich intellectual, theological and social tradition at our disposal that rejects false framing and binary arguments that fit too neatly into partisan boxes. Catholics could be leaders in reclaiming a more authentic commitment to religious freedom that doesn't pit religion against LGBTQ dignity, or view rights and responsibilities as opposing forces.

Sadly, many Catholic institutions have lost the legitimacy to offer such a necessary contribution. It seems that nearly every month another gay and lesbian employee of a Catholic school is fired, and some Catholic universities use religious liberty claims to deny labor rights to workers on campus.

And then there are Catholic elected officials such as Texas Gov. Greg Abbott, who touts his "pro-life" credentials and commitment to religious liberty, even as last week he became the first governor in the nation to reject any new refugees into the state under a Trump administration policy, a move that will impact those fleeing political and religious persecution.

Authentic respect for religious freedom demands theological and political humility, a framework anchored in empathy for arguments that challenge your prevailing biases. It's no surprise that when Barr bemoans attacks on religion, he doesn't mention an Arizona humanitarian worker who was recently acquitted in federal court after providing aid to migrants crossing the U.S.-Mexico border. The worker, inspired by his faith to act, successfully invoked the Religious Freedom Restoration Act in his defense.

When Trump is courting Catholic voters in swing states, he won't remind anyone that part of his administration's plans for a border wall include bullying the Catholic Diocese of Brownsville, Texas, which is protesting the federal government's efforts to seize land on the site of a historic chapel. Selective deployment of religious liberty arguments that simply advance your preferred party, ideology or candidate turn a treasured tenet of American democracy into a blunt tool for transactional politics.

While the right-wing trope that liberals are hostile to religion is bogus, progressives are also not exempt from the need for self-scrutiny. As Melissa Rogers, former executive director of the White House Office of Faith-Based and Neighborhood Partnerships under President Barack Obama, writes in her new book, Faith in American Public Life, "Some government officials have erred by presuming that religious beliefs and practices are insincere and that everything they would define as 'intolerance' can and should be eradicated by the state."

The government at times "must reject some requests for religious exemptions," Rogers writes. "But they should do so without disparaging people's faith or appearing to call into question an entire First Amendment right."

Along with other Catholic progressives, I have been critical of the leadership of the Knights of Columbus, a Catholic fraternal society whose top executives have been active in conservative political causes. But I cringed when two Democratic senators publicly challenged a judicial nominee on his membership in the Knights. Liberals only feed Republican propaganda that the left is contemptuous of religion when they make it easier to make that case.

A new movement to rescue and reclaim religious freedom from the political and religious right is more important than ever heading into an election. Religious liberty is not a partisan ornament or a weapon to wield for electoral gain.

The next year will challenge those of us who care about the role of faith in public life to both call out cheap expedience and, most importantly, build something better for the future. A multifaith and diverse generation now has the opportunity to leave stale narratives behind and do justice to a value that is the birthright of all Americans.