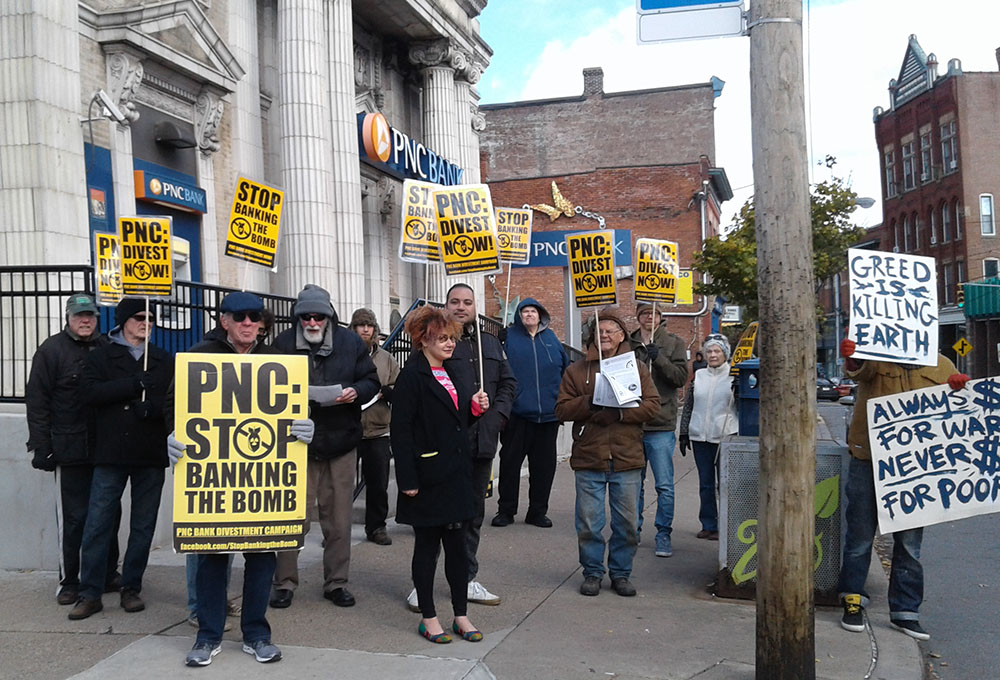 On Nov. 7, Pennsylvania's vote had just been called for Joe Biden. Beeping horns and jubilant motorists marked the celebration. On a day with unseasonably warm weather, it was a good morning for a picket at the PNC Bank branch on East Carson Street on Pittsburgh's South Side.

The picketers rolled out their banner "Stop Banking the Bomb" and unpacked their signs. The pandemic had not yet reached epic proportions, and suburbanites coming into the city for a lazy morning brunch gave the picketers a fresh audience.

It was an occasion of historic importance. Two weeks before, Honduras became the 50th country to ratify the U.N. Treaty on the Prohibition of Nuclear Weapons. With that final signature the document could take effect on Jan. 22. The treaty (which the United States has not signed) prohibits the use, development, testing, production, manufacturing, acquiring, possession, stockpiling, transferring, receiving, threatening to use, stationing, installation or deploying nuclear weapons.

Beatrice Fihn, executive director of the International Campaign to Abolish Nuclear Weapons, issued a statement: "This is just the beginning. ... States that haven't joined the treaty will feel its power too — we can expect companies to stop producing nuclear weapons and financial institutions to stop investing in nuclear weapon producing companies."

The Stop Banking the Bomb group (SBTB) has stood in front of one building or one corner or another, twice a month, since 2017, calling for PNC Bank, headquartered in Pittsburgh, to eliminate its $1.1 billion investment in companies that manufacture parts for nuclear weapons.

The Stop Banking the Bomb group grew out of the Anti-War Committee of the Merton Center, the ANSWER Coalition, Pittsburgh Anti-Imperialist League and Veterans for Peace. Many church-related groups have joined the campaign, including the Association of Pittsburgh Priests, the Christian Alliance for Peace, St. Mary Magdalene Parish Social Justice and Peace Committee, the Association of U.S. Catholic Priests, Jewish Voice for Peace and the Pittsburgh Friends Meeting.

In 2017, Pope Francis proclaimed that not only the use but the mere possession of nuclear weapons is immoral and is to be condemned.

"This leadership from Francis for people of faith and goodwill confirms the importance of the SBTB campaign here in the U.S. and similar efforts around the globe," said Joyce Rothermel from St. Mary Magdalene Parish in Pittsburgh's East End, a founding member of the campaign.

Fr. Paul Dordal, ordained in the Syro-Chaldean Church of North America, is one of the founders of the Pittsburgh campaign. He summarized the group's activity, noting that it has conducted close to 100 pickets and rallies at various PNC locations in the greater Pittsburgh area. The group has also filed a shareholders' resolution.

At shareholder meetings, bank officers are usually not prepared for people who call them out for investments in weapons. William Demchak, PNC president, has said in response to the dissident shareholders that the bank would continue lending to companies that "use, design or build" nuclear weapons. In 2018, he said, as quoted in the Pittsburgh Post-Gazette, "It's not something we'd pull back from. They're good companies."

But PNC cannot ignore this pesky campaign. Within the last year, PNC agreed to two conversations between members of the Stop Banking the Bomb campaign and two bank representatives. Lora Phillips, assistant vice president for corporate responsibility, said during the conversations that the bank continually reviews its lending standards concerning environmental and social responsibilities.

To its credit, PNC divested from mountaintop removal coal mining in 2015, and ended investments in private prisons in 2019.

The PNC representatives argued that the weapon makers also make products that benefit humanity, and they suggested that PNC's investment is small.

Pittsburgh is a small big city, where people know one another. When the group gathers at the headquarters or a branch, members engage passersby in conversation, with mixed results.

Some people are astounded and some who have accounts at PNC have closed their accounts. This is doubly effective when they write a letter to the bank, explaining their reasons for closing their account, and to the local newspaper, with the same message.

Others are indifferent, and some say they like nuclear weapons and are glad PNC invests in them.

A group called the Raging Grannies occasionally joins the picketing, belting out a song written for PNC bank. Bank employees watch from the tall glass windows, and during the lunch hours, make their way through the pickets.

Dordal remembers one PNC employee who said to him, "I am glad you are doing this. I don't want to work for a bank that is involved in this."

Fr. Bernard Survil from the Diocese of Greensburg, Pennsylvania, has set up an online petition, demanding that PNC sell off its loans, investments and bond issues with nuclear arms producers. More than 500 have signed the petition, with comments.

In his comments, Survil noted how he once heard Fr. George Zabelka, the chaplain for the Enola Gay crew that dropped the atomic weapon on Hiroshima, describe what he said was his grave error. "I was certain that this mass destruction was right. ... I was 'brainwashed' ... by my Church's silence. ... On Judgment Day I think I'm going to need to seek more mercy than justice," Zabelka said.

The Stop Banking the Bomb campaign has enlisted the services of Investor Advocates for Social Justice, to assist in the preparation of a shareholder's resolution requesting that PNC assess the risks of lending, investing and financing activities within the nuclear weapons industry. Two co-filers, the Sisters of St Joseph of Brentwood, New York, and the Sisters of the Humility of Mary, based in Villa Maria, Pennsylvania, will join in presenting the resolution.

The Pittsburgh group is, as far as organizers know, the only campaign in the United States focused on divestment of nuclear weapons by financial institutions.

The Pittsburgh Stop Banking the Bomb group has a packet of information to help others get started and can be reached at stopbankingthebomb@gmail.com and through its Facebook page.