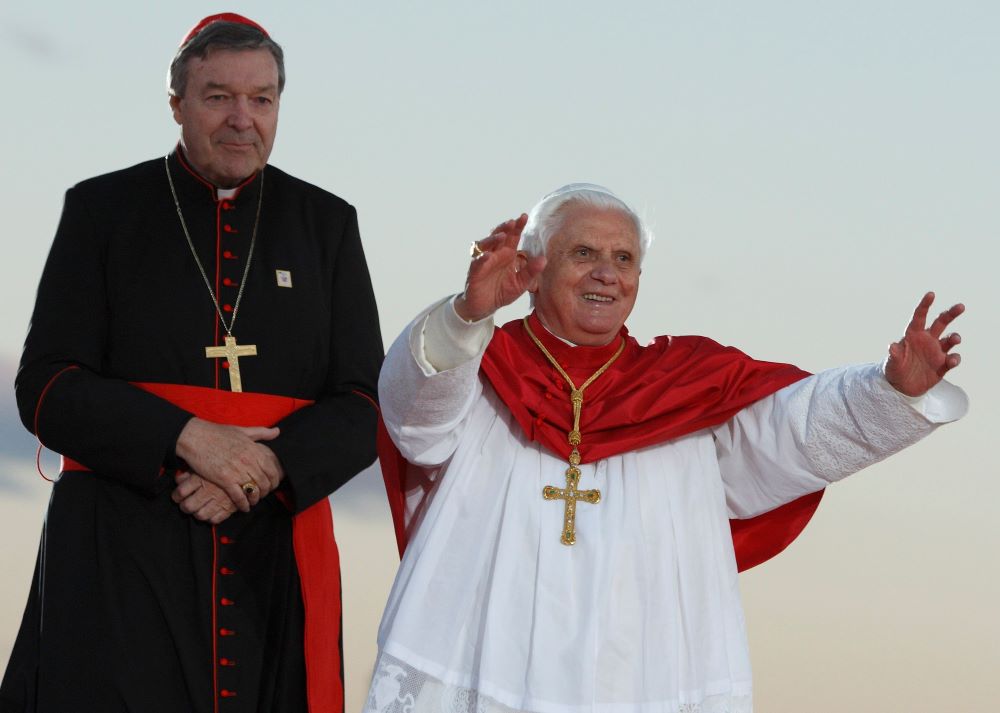 Cardinal George Pell of Sydney, Australia, looks on as Pope Benedict XVI waves to pilgrims during a ceremony welcoming the pontiff to World Youth Day in Sydney in this July 17, 2008, file photo. Cardinal Pell, former prefect of the Vatican's Secretariat for the Economy, died Jan. 10 in Rome at age 81. Benedict died Dec. 31 at 95. (CNS/Paul Haring)

As the Catholic Synod on Synodality enters its "continental phase," some have wondered if the church is moving toward Vatican III.

Of course, there are still fights going on about Vatican II.

Not long ago, Sr. Nathalie Becquart, undersecretary of the General Secretariat of the Synod, said the current synod would lead "to a new reception of the Second Vatican Council," allowing the reforms of the mid-1960s to finally take hold. A small but vocal cadre of Catholics fears that precise possibility, which they caricature as a church overrun with bad liturgy, bad moral theology and guitar music.

Lately these so-called traditionalists have lost two beacons of their truths. The recent deaths of Pope Emeritus Benedict XVI and Australian Cardinal George Pell may serve to deflate the anti-synod underground, or at least weaken its intellectual base.

Benedict, a quintessential Vatican insider and brilliant theologian, was the architect of every notice and ruling against real participation by lay persons — an explicit goal of the synod — and especially by women. Some 40 years ago, as prefect of the Congregation of the Doctrine of the Faith, he convinced the committee revising the Code of Canon Law to keep governance and ministry within the clerical caste.

Before then and since, he was behind every statement against the ordination of women, first as priests, then as deacons. With no means other than a passive aggressive approach, he ensured the question of restoring women to the ordained diaconate remained unanswered.

Benedict’s good friend Pell made enemies in Rome while attempting to reconcile Vatican finances as prefect for the economy. (His term lapsed in 2019, while convicted on abuse charges overturned in 2020.) A former archbishop of Sydney, Pell was behind the scenes when the Australian bishops turned down the recommendation to make women deacons in August 2022, though it was later adopted. Pell is also said to be "Demos" ("people"), author of a memo to cardinals calling the pontificate of Pope Francis "a disaster."

Pell, or at least the anonymous "Demos," blames the synod process itself for the church's ills, while acknowledging secularization and Western influences. The main problems: "We are weaker than 50 years ago and many factors are beyond our control, in the short term at least, e.g. the decline in the number of believers, the frequency of Mass attendance, the demise or extinction of many religious orders."

Therein lies the rub. The factors noted have causes. Some argue there are two main streams of blame for the decline: the culture and the church itself. A more likely reason is that the changing culture exposed the facts and foibles of the church. Few if any Catholics in ethnic city neighborhoods or suburbia are willing to pray, pay and obey as they once did.

To a significant extent, it matters not whether they are so-called traditionalists or progressives. More Catholics in more cultures are better educated and less willing to put up with autocratic clerics, especially amid ongoing — even increasing — sex and money scandals.

That is where the Synod on Synodality, which presents all people with an opportunity to consider the church as church, is lancing boils the most conservative clerics have only bandaged over.

The broadest brush paints traditionalists in conservative shades of political reds. That same brush paints progressives in liberal blues. But red and blue Catholics are walking away in equal numbers, often led by the women of their families who have had enough. Neither Benedict nor Pell, with or without Latin, lace and incense, could stem the tide. But neither will Francis, alone, be able to push it back.

If truth be told, the women of the church are leading its reform. Only they can lead its rebirth.