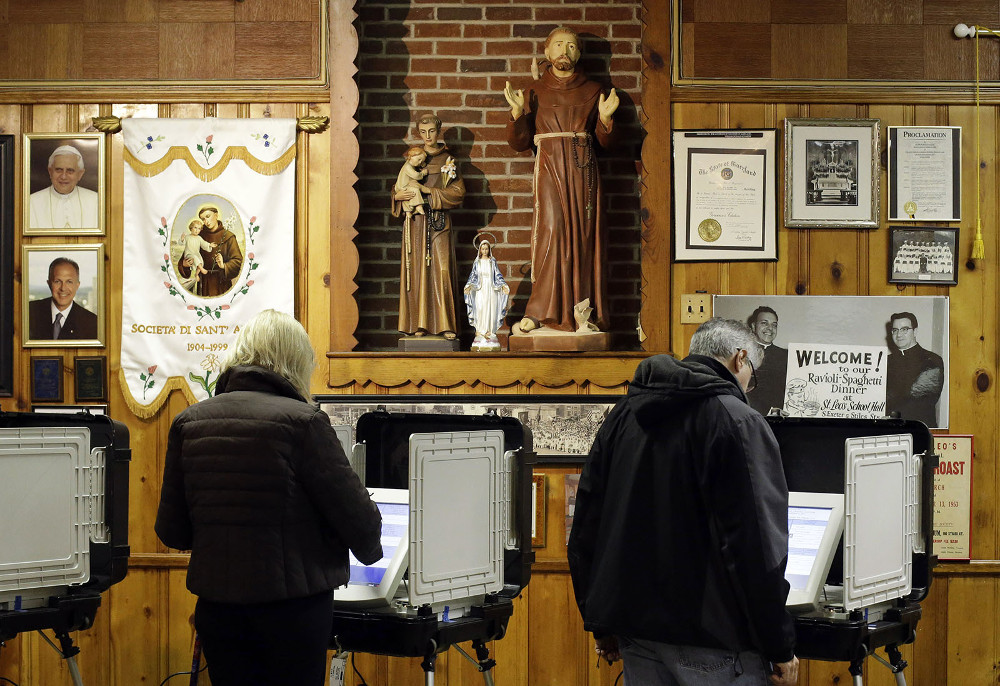 Catholics are moving away from President Trump.

In the latest Quinnipiac poll (which thankfully includes a set of questions about religion), 55% of Catholics say they will definitely not vote for Trump in 2020, as opposed to 32% who say they definitely will vote for him and 12% who say they'd consider it. Even if all those who are only considering voting for him end up in his corner, the resulting 55-44 margin would be a major blow to his reelection chances.

In 2016, Catholics voted for Trump over Hillary Clinton by 50% to 46%. Given that Catholics make up roughly a quarter of the electorate, the 15-point shift away from him would equate to nearly four percent of the entire popular vote.

The poll suggests that the overall Catholic shift towards the Democrats in last fall's midterms is continuing. In 2016, Catholics preferred Republican to Democratic House candidates 53% to 46%. In 2018, they swung the other way, favoring Democrats 50% to 49%.

Interestingly, the slippage is somewhat greater among white evangelicals. Where 80% of them voted for Trump in 2016, now 60% say they'll definitely vote for him, and another 15% are considering it, for a total of 75%. Where 16% voted for Clinton, now 24% say they definitely won't vote for Trump.

What accounts for the proportionately greater Catholic shift? A number of explanations suggest themselves.

Even relatively conservative Catholics retain elements of Catholic social teaching that put them at odds with Trump policies. Of these, the most important may be the Church's preferential option for the poor and its strong history of, and support for, immigration. It's also worth bearing in mind that the president's religious outreach has been almost exclusively to evangelicals, toward whom the Catholic rank and file retain considerable suspicion.

What about Latinos, who constitute an increasingly large portion of the Catholic population? It is plausible to think that the shift is the result of their distress at Trump's border policy and his attitude toward Puerto Rico in the wake of Hurricane Maria.

In fact, that doesn't seem to be the case. Although the Q-poll provides no information on Latinos, exit polls show that their increased preference for Democratic House candidates was less than half of what it was for Catholics as a whole: up seven points, from 67-32 in 2016 to 69-27 in 2018. In a word, most of the shift is on the part of white Catholics.

Over the past several decades, the candidate who wins the Catholic vote has won the presidency. At this point, Trump is losing it.