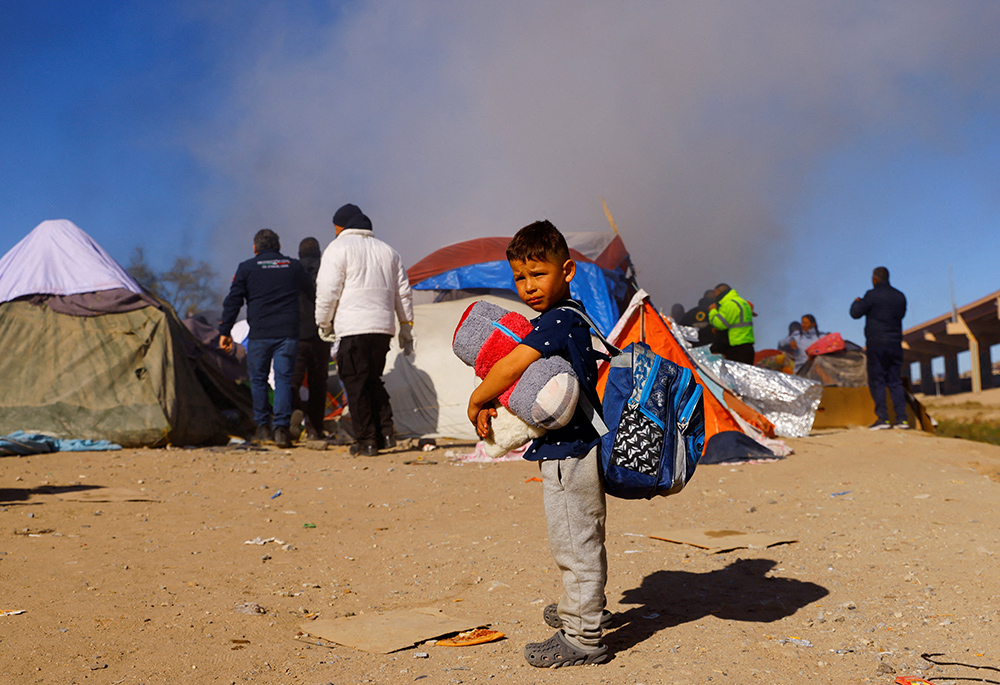 A child in Ciudad Juárez, Mexico, stands as police remove Venezuelan migrants from a camp on the banks of the Rio Grande Nov. 27, 2022. (CNS/Reuters/Jose Luis Gonzalez)

On Jan. 22, 2003, the U.S. and Mexican bishops issued a historic pastoral letter on migration. Titled "Strangers No Longer: Together on the Journey of Hope," the letter responded to the "signs of the times" — increased levels of immigration from Mexico and Central America to the United States.

The letter, the first of its kind between two episcopal conferences, called for a major overhaul of the U.S. and Mexican immigration systems. Among the letter's policy recommendations was the adoption, in both countries, of a path to citizenship for the undocumented.

Twenty years later, reform of the U.S. immigration system remains stalled in Congress, despite ongoing pleas from advocates and a Democratic administration. And it is unlikely to happen anytime soon, as the divide between Democrats and Republicans on the issue has only widened.

Why the lack of progress? There are a multitude of reasons which can be summed up in one term: political will. For various reasons, an insufficient number of our elected officials have shown the leadership and statesmanship to get such a controversial issue across the finish line.

That is not to say that leaders on both sides of the aisle have not tried to get immigration reform to the president's desk, but compromise on the issue has remained out of reach. Conservative Republicans have been the main culprits, too often politicizing the issue to play to their base. Why solve the problem when you can use it as an issue in a campaign?

A quick review of the legislative history provides some insight into where we stand today.

In 2006, the U.S. House of Representatives passed an immigration enforcement bill with a guest worker program, while the U.S. Senate passed a more comprehensive bill which featured a path to citizenship. Given the harsh enforcement provisions in the House bill, Senate leadership was reluctant to appoint conferees to negotiate with the House. In retrospect, perhaps a compromise should have been sought.

In 2007, the Senate tried again, but was unable to overcome a cloture vote on the floor. The bill contained a "point" system for legal immigration, which critics maintained favored the wealthy and educated, and an insufficient legalization program. Many pro-immigrant groups, including the U.S. bishops' conference, opposed the legislation.

Finally, in 2014 a bipartisan group of senators, known as the "Gang of 8," was able to get a comprehensive bill through the Senate. Because of strong opposition from conservative Republicans, however, the bill was never considered in the House.

Over the past 10 years, the immigration issue has become more polarized, with Republicans opposing any legislation they deemed an "amnesty," including legislation that would provide legal status to undocumented people who came here as children, known as the DREAM Act.

In each of these efforts, the road to compromise has been hampered by groups on both sides of the aisle who could not stomach certain provisions. As a bill would move through the legislative process, it inevitably became more difficult to sustain, as both sides were unable to agree to concessions that their base could not support. 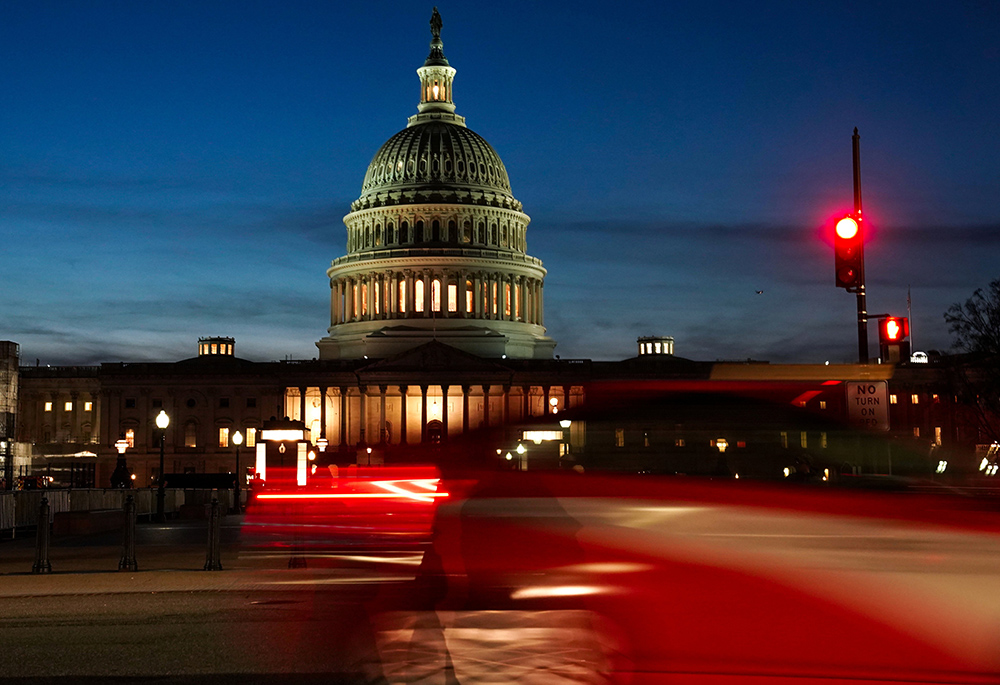 But there are larger forces at play in this country that have hindered the effort. Until these forces can be adequately mitigated, immigration reform will remain, as one government official once described it, the "third rail" of politics.

Cultural fear: While opponents have deployed economic arguments against immigration, the real issue behind the opposition is the fear of the other — the feeling, stoked by opponents, that the nation would be forever changed by immigration reform — demographically, linguistically and racially. At the core of this fear, again fanned by some, is the idea, often unspoken, that the United States would lose its white majority.

Lack of a powerful constituency: For a policy issue to get traction and become law, it needs a powerful constituency, including a large bloc of voters, to advocate on its behalf. While immigration, faith and business groups have pushed for immigration reform, the American public, although generally supportive, has not placed it high on their priority list. Sadly, too many Americans do not think about how immigration may benefit them, but only about how it might threaten them.

During past legislative battles, the opposition, motivated by fear and loathing, has been able to generate significant grassroots opposition to any reform bill. The constituency that would benefit the most from passage of reform legislation — undocumented immigrant families — are unable to vote, so legislators have little fear of losing at the ballot box.

If it is broke, don't fix it: The unspoken truth is that, regardless of the rhetoric against them, undocumented workers fill important jobs in our economy, particularly in the agricultural, service and construction industries. If the crops are being harvested, the restaurants are being staffed and the houses are being built, why should we change the system? In fact, some would say we can accept their sweat equity and still scapegoat them for our social ills.

Making the moral case for reform, the bishops argued in "Strangers No Longer" that the U.S. immigration system in fact exploits human beings for the benefit of the nation. We cannot, the bishops maintained, use immigrants as cheap labor without providing them with the basic rights we all share. 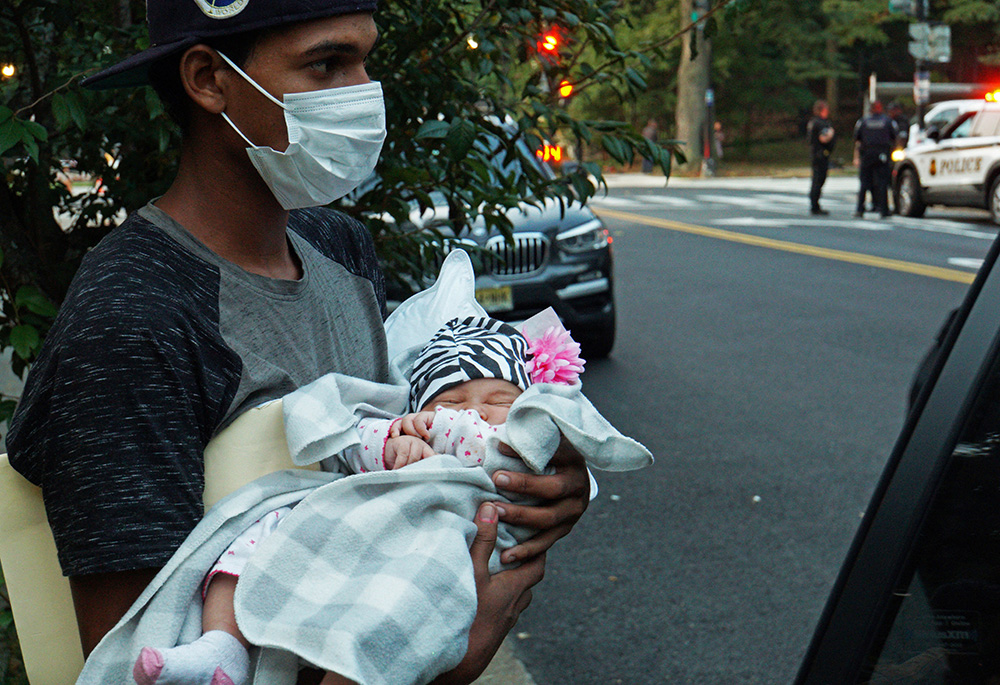 A 1-month-old baby is placed into a vehicle for transport to a safe place in Washington Sept. 17, 2022, after a group of mainly Venezuelan migrants arrived by bus from detention in Texas and were dropped off outside the Naval Observatory, the official residence of Vice President Kamala Harris. (CNS/Reuters/Marat Sadana)

Now the national immigration debate has deteriorated into a fight about how we can best keep migrants away from the U.S.-Mexico border, with Republican governors shipping asylum-seekers to Democratic cities to score cheap political points.

It is a vicious cycle of political posturing and gamesmanship that, in the end, will not solve the underlying problems with our immigration system.

Until the American public, including Catholics, place positive immigration reform as a top priority for their elected officials in Congress, progress on this issue will remain elusive. As Pope Francis has stated, we must challenge the "culture of indifference" toward migrants in our nation and world.

In the meantime, the church, in solidarity with "the least of my brothers and sisters," (Matthew 25:40) must continue to push for the policy reforms laid out in "Strangers No Longer" 20 years ago.

A version of this story appeared in the Jan 21-Feb 3, 2022 print issue under the headline: We're still waiting for immigration reform after 20 years.