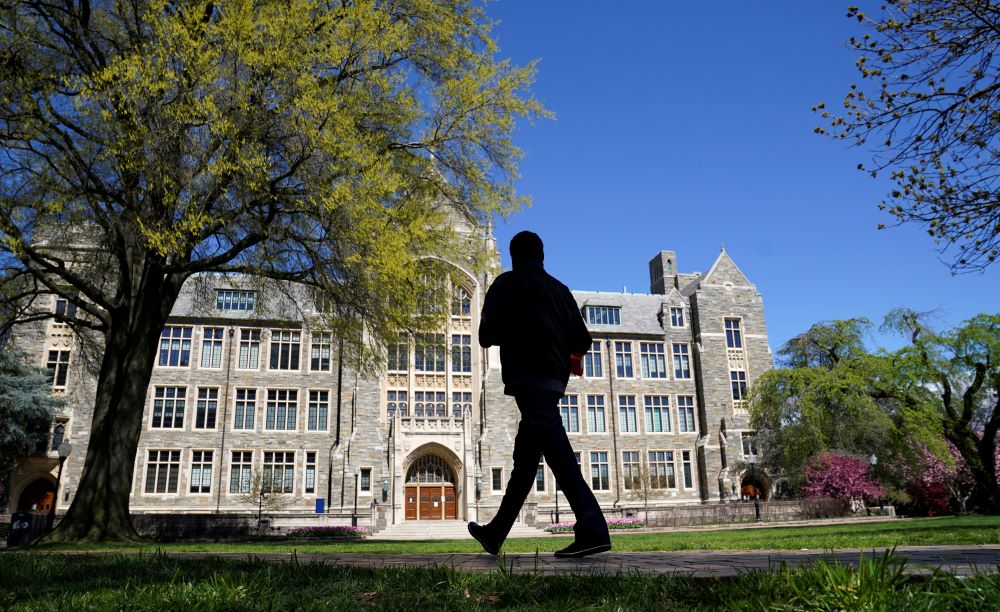 Georgetown University in Washington, D.C., founded in 1789, is the oldest Catholic university in the U.S. (CNS/Reuters/Kevin Lamarque)

A lot has happened, of course, since 1955. Unfortunately there are, however, urgent questions as to whether much of American Catholic higher education is again in second-class status in general and fails even to foster excellence in fields of traditional Catholic learning in particular.

Consider the extraordinary dependency on adjunct and other contingent faculty. What does this dependency mean for Catholic identity and for intellectual excellence, especially in fields of the arts and humanities? As Gerald J. Beyer reports in his recent book, Just Universities: Catholic Social Teaching Confronts Corporatized Higher Education, according to American Association of University Professors data, 71% of all college instructors are now contingent faculty. Only 14% hold tenure, whereas in 1969 three fourths held tenure. About 75% of adjuncts do not hold jobs outside academia, and they really desire careers in higher ed. But can they afford it?

Clearly they cannot afford it. The national median pay, according to Beyer, for a three-credit course in 2010 was $2,700, and where adjuncts had been successful in unionizing, there was a premium of about another $600 per course. In 2019-2020 the average pay has risen only to $3,556. As Beyer notes, the annual pay of adjuncts is "on the edge of poverty," according to the House Committee on Education and Labor.

This casualization of the academic workforce is, not surprisingly, viewed as the single most serious problem in higher education, and it is most acute in Catholic institutions. During all the years I was a trustee at one of these Catholic colleges, a persistent concern was how to ensure that students were being taught by adjuncts who truly supported the mission values of the college. We needed instructors. The instructors wanted jobs. Inevitably, there was a "drift" away from the mission values. With such mission creep, what confidence can donors have in the future mission of these schools?

One may also ask who, then, wants this career? I have a son who after years of successfully teaching in a Catholic high school entered the doctoral program at the Institute for American Studies at Harvard. After five successful years he left because at the time the only open tenure-track positions were in Louisiana and Montana, and he had promised his wife that they would return to Northern California. My son told me, "Dad, as an adjunct I would teach one morning here, another college in the afternoon and yet another tomorrow, living out of my car's trunk, with no health care or retirement benefits, and no job security from one semester to the next, and little hope of ever gaining a tenured position. I cannot succeed as a spouse and father in higher ed." Sadly, he was correct. If this story is replicated, and it is, then what does the future hold for Catholic higher education if there is no "bullpen" for aspiring scholars to spend a lifetime in critical intellectual work?

Might unionization help contingent faculty establish stable relationships? Unionization is not presently possible under existing legal precedents. These adverse precedents have been won, sadly to say, by Catholic colleges including Duquesne (Spiritans), Manhattan (Christian Brothers) and St. Xavier (Mercy Sisters). Although unionized for several years, St. Leo University (Benedictines) in Florida has just recently used these adverse precedents to withdraw from any collective bargaining relationship, thereby leaving its faculty at the sufferance of a board of trustees more desirous of a dictatorial operation.

Money, of course, is what drives this opposition. Whether the opposition's motive is a concern for good stewardship or a motive more associated with crass capitalistic business instincts, the result is the same for faculty: no hope to band together to gain better wages, hours and conditions. Adjuncts, for example, would like to negotiate for better salaries, for at least pro-rated benefits and for processes that would lead to tenure-track positions and a career.

Readers will no doubt have already asked themselves how this opposition by Catholic universities and by the associations that represent them can be squared with Catholic social teaching. The short answer is that it cannot. The boards of trustees of these institutions — comprising businesspeople likely ignorant of, or perhaps even hostile to, Catholic social teaching, their officers and the associations — simply do not accept church teaching and prefer anti-worker policies.

The unsustainability of rising tuitions leads to a further question: Should some of these institutions even continue operating if they can only do so on the backs of undervalued, servile contingent faculty? The Holy Spirit does not guarantee their continuance.

If philosophy and theology are no longer taught beyond perhaps a small smorgasbord of religious studies offerings, what is the purpose of continuing? Can we justify the huge outlay of expense to train students for jobs in the present economy when doing so may be without moral and religious values associated with the Catholic intellectual tradition? Might not we do better to follow the oratory model of Cardinal John Henry Newman's earlier experience and center quality institutions of philosophy and theology around secular universities? Would this not at least provide some contribution of the Catholic intellectual tradition to higher ed without doing so on the backs of cheap labor in contradiction of those same Catholic values?

In his blockbuster 1955 article, republished as the 1956 book American Catholics and the Intellectual Life, Ellis closed with an expression of his personal hope for what he called the "exalted mission of the intellectual apostolate on the part of the Catholic scholar." Citing the historian and political scientist Clinton Rossiter writing in Yale Review, he envisioned that Catholic higher education might "rest its own strong faith in liberty and constitutional democracy on the bedrock of these traditional, indeed eternal values: religion, justice, morality."

Granted, our times have changed and a more ecumenical apostolate is necessary and desirable. His question today might be whether our Catholic colleges and universities are simply running competition without any distinctive contributions from Catholic tradition. As long as they themselves cannot "do justice" to those who daily carry out their mission, this existential question remains painfully open.

We need another period of reflection and change, analogous to 1955. Will anyone lead it before consumers decide that the product is not distinctive enough to be worth the tuition?