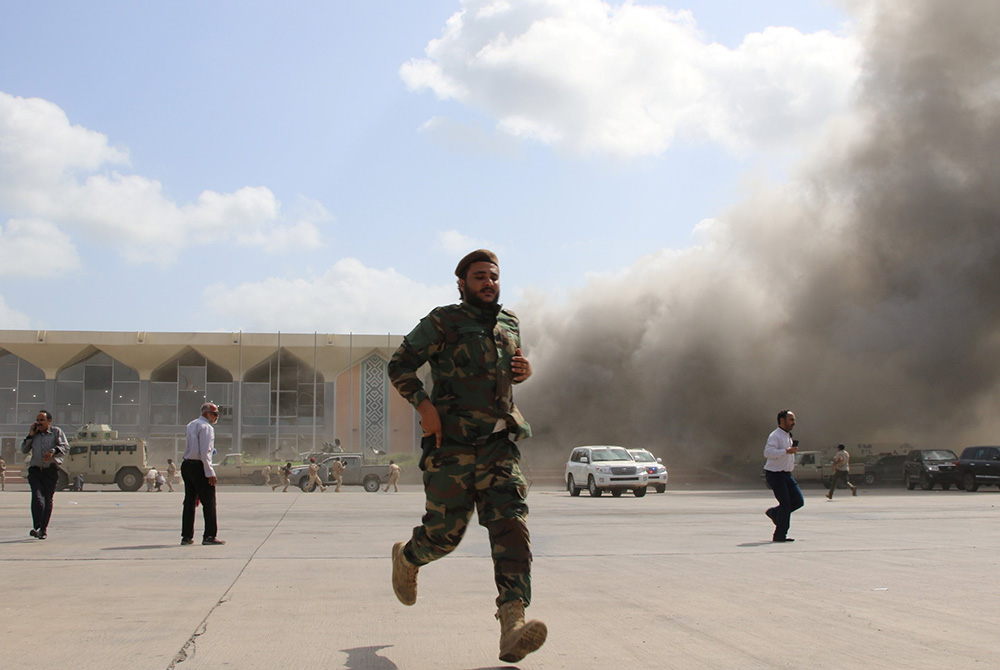 A security member runs during an attack on the airport in Aden, Yemen, Dec. 30, 2020, moments after a plane landed carrying a newly formed Cabinet for government-held parts of the country. (CNS/Fawaz Salman, Reuters)

If you glanced at the recent headlines, you probably saw what appeared to be good news: The United States would finally stop selling arms to Saudi Arabia and end our involvement in the conflict in Yemen. But if you clicked through, you saw this quote from our new Catholic president, who is supposedly less supportive of Saudi Arabia's war, and of war in general: Joe Biden announced that we were "ending all American support for offensive operations in the war in Yemen, including relevant arms sales." First question: "offensive," according to whom?

Our military presence in Yemen covers a number of different roles, most but not all of which are predicated on assisting Saudi Arabia, the country that is technically at war. From the Saudis' perspective, there have never been any "offensive operations" in Yemen. They view the Houthi occupation in Yemen as an existential threat and their role in the conflict as wholly defensive in nature.

The defensive framework is really important here, as they've continually used it to defend the bombing of schools, hospitals and residential areas as necessary defensive measures. With our assistance, they've killed thousands of civilians. According to 2018 reporting by The Associated Press, "coalition airstrikes and shelling killed at least 4,489 civilians since the beginning of 2016." Almost a year later, The Armed Conflict Location & Event Data Project reported that the coalition and its allies were "responsible for the highest number of reported civilian fatalities from direct targeting, with over 8,000 since 2015." The project estimated the total body count to be over 100,000 reported fatalities, "including over 12,000 civilians killed in direct attacks."

Biden says we are ending the sale of "relevant arms" to Saudi Arabia, so which arms are those? Not all arms, obviously, but relevant arms, implementing a new prohibition on the kinds of weapons relevant to an undefined criteria for what does or does not constitute "offensive" operations.

To explicitly call their bombing campaigns "offensive operations" would be marginally closer in truth to what our military nominally refers to as "defensive measures." But at no point does the president explicitly or even implicitly connect the "offensive operations" in question to our role in Saudi Arabia's six-year bombing campaign in northern Yemen.

Then the president followed up with a disclaimer, saying "At the same time, Saudi Arabia faces missile attacks, UAV strikes, and other threats from Iranian-supplied forces in multiple countries. We're going to continue to support and help Saudi Arabia defend its sovereignty and its territorial integrity."

Statements like this have been the party line for the last six years. It's always been the answer to the question of what exactly we are doing in Yemen. So, what's actually changed? 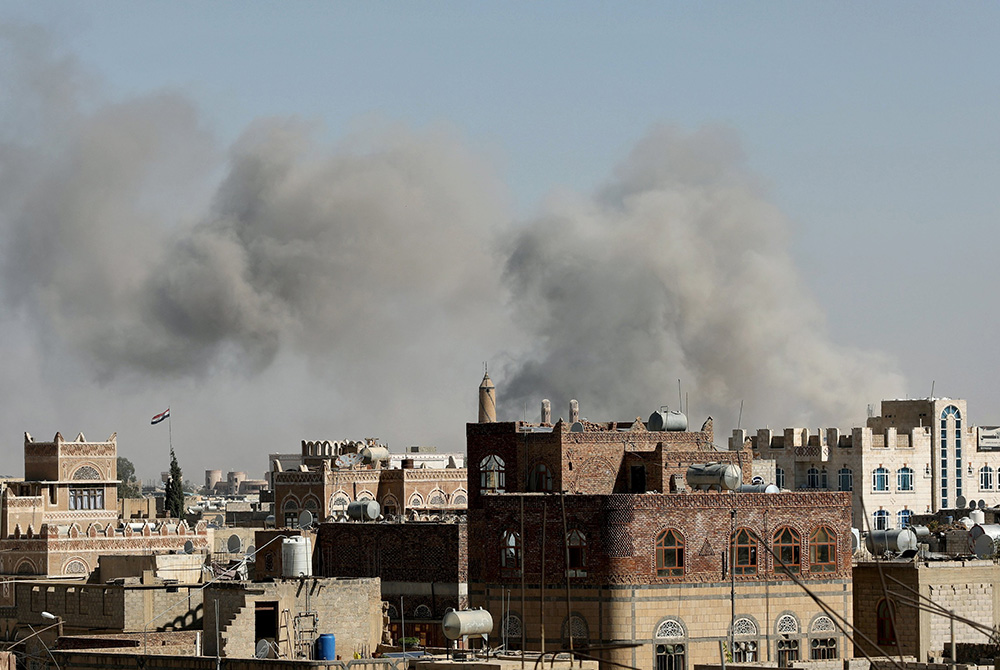 Smoke billows from the sites of Saudi-led airstrikes in Sanaa, Yemen, Nov. 27, 2020. During his Jan. 1 Angelus, Pope Francis offered prayers for the people of war-torn Yemen, especially the nation's children left without education and often without food by years of civil war. (CNS/Khaled Abdullah, Reuters)

Biden reversed the Trump administration's decision to designate the Houthis as a terrorist group, which had been a major roadblock for humanitarian aid being able to reach Houthi occupied territory. He also called for renewed peace talks, appointing career diplomat Timothy Lenderking as U.S. envoy to the region, ostensibly to broker a new peace agreement.

Pursuing peaceful resolution to conflict is always commendable, especially after four years in which our diplomatic corps was so underutilized. But it's worth keeping in mind the long list of peace agreements in the region, brokered by international governing bodies like the U.N. and the Gulf Cooperation Council, or GCC, that have all, without exception, backfired catastrophically and have unintentionally made the conflict worse. It is also worth noting that one such power-sharing agreement is what sent the country into a civil war to begin with.

In 2011, the GCC brokered a deal to try and ensure the peaceful transition of power from president Ali Abdullah Saleh to his vice president, Abed Rabbo Mansour Hadi. Saleh, who had served as president for 33 years, was accused of widespread corruption but was granted immunity in the deal. His immunity, among other things, allowed him to retain the loyalty of large factions within the Yemeni military, which he cajoled into a short-lived alliance with the Houthis.

This alliance allowed the Iran-backed Houthi movement to orchestrate a coup and capture Sanaa, the capital of Yemen, with very little resistance, sending the country spiraling into a civil war. Saleh was killed by Houthis while attempting to flee Sanaa in 2017, and Hadi is still the man we recognize as the president of Yemen despite running unopposed, overstaying a term that technically ended in 2014, and living in exile in Saudi Arabia. He spends most of his time in Riyadh.

The most recent peace deal was the Stockholm agreement in 2018, which imposed a ceasefire that allowed the Houthis to regroup and launch a major new offensive, significantly expanding the amount of territory they occupy in northern Yemen. There is no reason to believe they will respect a new ceasefire any more than they did the previous one. Especially now, when they have significantly more leverage and are one major holdout away from controlling all of northern Yemen.

I spoke about Biden's announcement on Yemen with Mary Ellen O'Connell, a professor at the University of Notre Dame Law School and a research professor of international dispute resolution at Notre Dame's Kroc Institute for International Peace Studies. Widely recognized for her scholarship on the ethics of military intervention, she has been a vocal critic of America's support for Saudi Arabia in the conflict, and remains adamant that "there is no legal right for the Saudis or the United States to be interfering in a civil war, and that kind of conflict should never involve aerial bombardment."

"There isn't, in reality, any bright line or clear category between offensive and defensive weapons," she told me. "It will be up to us, in consultation with the Saudis, to decide what weapons we are willing to classify as defensive," she said, adding that she hopes the U.S. takes a conservative approach in defining that distinction.

Of the Saudi-backed Hadi regime's shaky claim to legitimacy, O'Connell notes, "If you can't hold on to your own country against your own people, you're not the government. The Houthis are in a better position now first and foremost because they have a lot more popular support. The Hadi regime crushed attempts at democracy in Yemen, and drove people who would not naturally be supportive of the Houthis right to them."

Still, she's optimistic about Biden's renewed efforts for a peace agreement. "The Stockholm agreement gave too much standing to the Saudi-backed forces. They lacked the legitimacy legally, and the control on the ground, to deserve the position they got [from the international community,] but there was really no alternative with how firmly the U.S. was behind Saudi Arabia," she said.

"If we no longer make common cause with the Saudis, there's a real chance to create a new agreement that is respectful of what the Yemeni people themselves want, which leaders they are willing to back," she said.

Even seeing the need for a new posture is an improvement over the last six years. Still, we are clinging to the same old rationale used to enter this proxy war in the first place: that as the world superpower, we can play referee for conflicts we have neither the tools to fix nor the authority, moral or otherwise, to mediate.

Again this year in his message on New Year's Day, Pope Francis highlighted the terrible suffering in Yemen, as he has over and over. Biden similarly called the situation there a "humanitarian and strategic catastrophe" and conditions "unendurable." Yet he did not adequately acknowledge our role in those conditions.

And there is enough intentionally ambiguous phrasing and doublespeak in his talk of "relevant arms" and "offensive operations" to make us wonder how new this approach is from the course we've been on for the past six years. If we were halting all arms sales to Saudi Arabia, and withdrawing all support for operations in Yemen, he would have said so.

Both initiatives would have broad public support, and could even be one of those "bipartisan solutions" he's always talking about. Instead, he gave a suspiciously complicated answer to a simple moral question: Are we going to continue to support a war that every day looks more like a genocide?

Those who want to see him succeed, and hope to see him exert the moral leadership that he has made his brand, need to press him hardest on this point, and on how stringent our oversight of relevant arms and offensive weapons will really be. A more disapproving posture means very little in the face of a genocide.