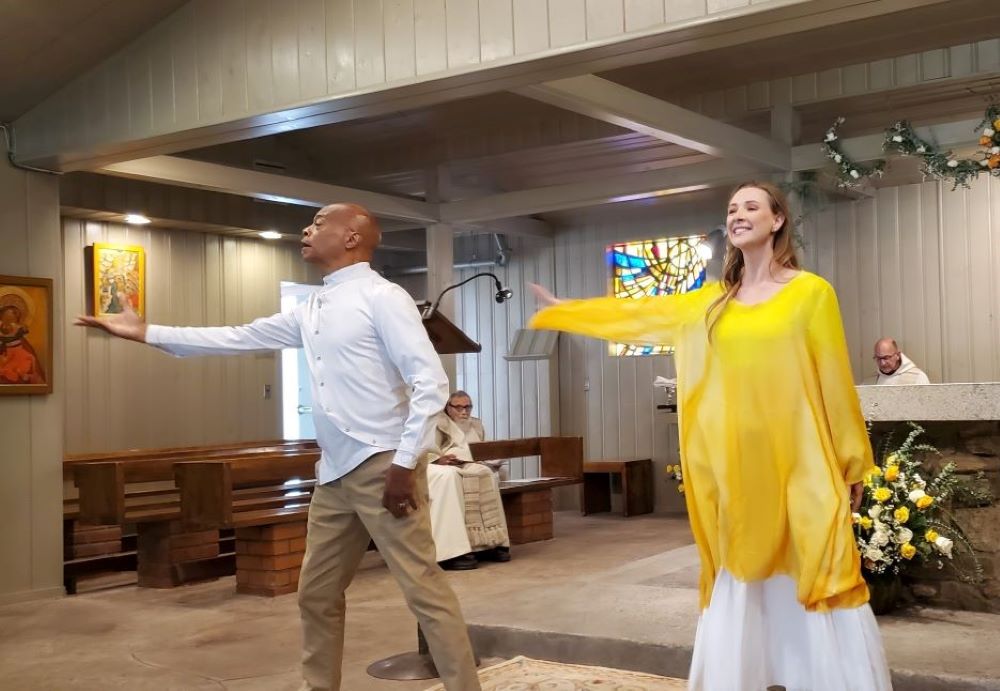 John West and Hilary Van Dixhorn lead the response to Psalm 149-150. Between them can be seen 93-year-old Fr. Philip Edwards, who has encouraged danced prayer. West founded the Valyermo Dancers after the Valyermo, California, Benedictine monks invited him to incarnate prayer in dance for vespers at a 1968 fall festival. (M.A. Kirk)

"At the still point of the turning world … there is the dance."

In the still point of a peaceful chapel at St. Andrew's Abbey in the desert, Benedictine monks sang compline (night prayer) with the psalms of David, who was a dancer about 3,000 years ago. Moving in reverent dance-like bows, they are joined by current and returning members of the Valyermo Dancers, many of them Benedictine Oblates.

They had come together Oct. 2 to celebrate the 50th anniversary of the group founded by John West, who studied dance with Janet Collins, the first Black prima ballerina to dance at the Metropolitan Opera. West was invited by the monks to incarnate prayer in dance for vespers at their fall festival in 1968 along with Black youth he mentored in a city parks and recreation program. The Valyermo Dancers evolved four years later from this event.

"When I was a senior graduating from Macalester College in St. Paul, Minnesota, the St. Joseph sisters hired me to choreograph a musical at St. Catherine's, but later asked if I would be interested in being a part of 'an experimental liturgy,' " West said. "I was being asked to create dance. I remember that being the Lord's Prayer, my first 'sacred dance' prayer." 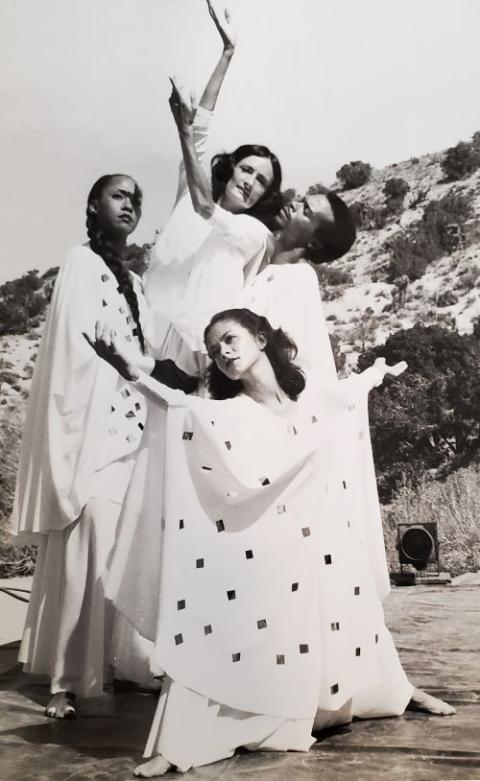 Over the years, Consuelo Zúñiga-West, West's wife, has been a partner in nurturing the community of dancers. Five decades is a long time for a dance group to continue. It may be the Benedictine strong emphasis on building community and staying rooted in spirituality that energizes them.

When a small group of Benedictines, an offshoot of the Belgian Missionary Benedictines of Sint-Andries, were driven out of China, they settled on 500 acres that had been a ranch near Valyermo, California, in 1955. One Benedictine, Fr. Werner Papeians de Morchoven, was a fine painter, designer and sculptor. The abbot, Fr. Vincent Martin, encouraged the arts. Art came to be a main monastic ministry, continued today with their sculpture workshop.

Ninety-three-year-old Benedictine Fr. Philip Edwards, a landscape architect and a great supporter of danced prayer, shared how the festival developed with hundreds being drawn to the art, crafts and dance. The monks began retreats centered in various art forms, where they would share spirituality and guest artists would lead the "conversation" with the divine through that art.

In the summer of 1971, the monks invited Carla De Sola, the Julliard-educated and respected modern dancer from New York City, to share a one-week dance retreat and this continued annually for 21 years. An outdoor amphitheater, the "Valyermo Bowl," provided a venue for Christian drama and dance. 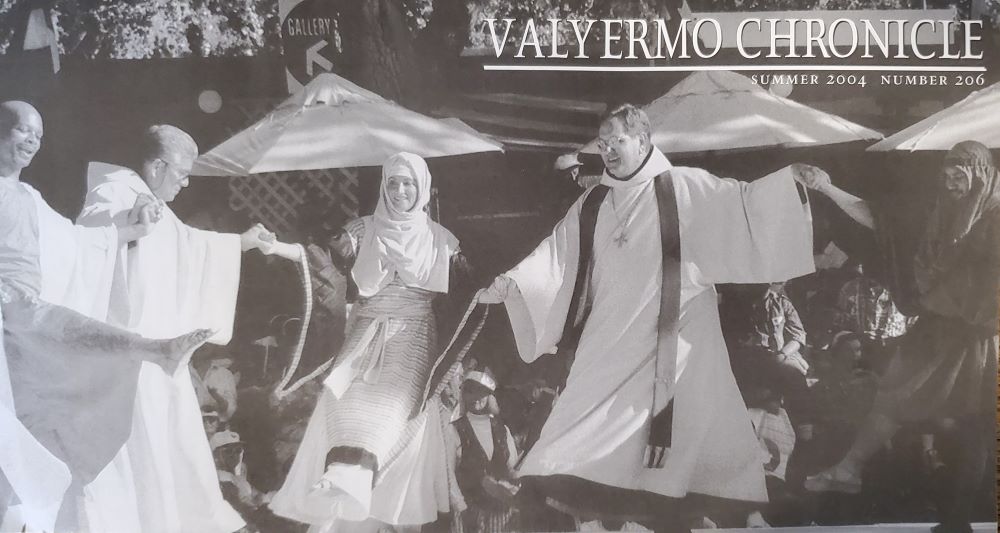 The image on the Summer 2004 Valyermo Chronicle captures some of the exuberance of the "47th Annual Fall Festival, An Arts and Crafts Festival in a Benedictine Monastery" with hundreds on the grounds enjoying music, visual arts, drama and dance. John West is on the left. (Courtesy of Valyermo Dancers Collection)

During the years of the festival, 1972 to 2018, the Valyermo Dancers developed a wide repertoire, including the "Sacrifice of Isaac," "Resurrection of Lazarus,"
Prodigal Son," "Road to Emmaus," "Judith," "Jo Jo Jonah & His Whale," "Misa Criolla," "Wedding Feast" and a Martin Luther King Jr. tribute. They also performed "God's Troubadour," based on St. Francis' story, and "Lux Hodie" based on St. Benedict and St. Scholastica.

The Oct. 2 anniversary celebration included an exhibit of photos, news, programs and films about the Valyermo Dancers. One film, "A Prayer for America," featured a danced prelude to the Eucharist with St. John Paul in Dodger Stadium during the papal visit in 1987. Hundreds of pictures revealed the depth of human feeling in dances.

The Valyermo Dancers may be best known because they have evangelized, healed and energized thousands of participants through their incarnational prayer at the annual Los Angeles Religious Education Congress.

The dancers were first invited in 1976, draping white fabric through the aisles of the Anaheim convention center arena in a movement meditation inviting love stronger than differences, love that heals, love overcoming polarizations. 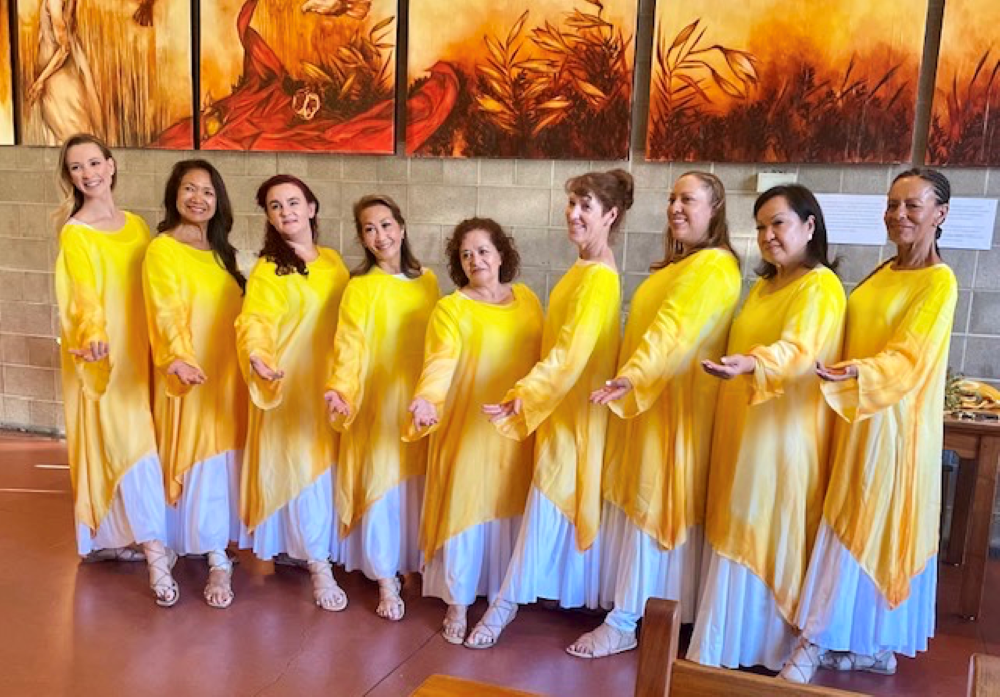 "Remember that refusing to condemn others causes our light to shine in the darkness. We are summoned to place our confidence in God," said Sister of Charity Sr. Edith Prendergast, the director of the Los Angeles Office of Religious Education at the time. "We rejoice in the midst of our struggle because we are held in the midst of God's love, a garment of love that revives and transforms."

In Dancing with the Divine, a collection of essays gathered by Carla De Sola, West wrote of being invited to dance the powerful James Weldon Johnson poem "Creation" for the Los Angeles Religious Education Congress. In the image of the creator, the creator who is even like a "mammy bending over her baby," West not only created a dance, but a better church and country where the divine shines through.

The Valerymo Dancers have consistently participated in the Los Angeles Religious Education Congress for years. After the anniversary's Eucharist and reception, the dancers were back at work the next morning planning rehearsals for the 2023 congress.

Among the guests at the reception were Barry Barfield and Evangeline Jaquias, who shared memories of dancing "Judith" in the International Seminar on the Bible in Dance in Jerusalem in 1979. Except for group leaders Zúñiga-West and John West, Jaquias has the longest history in the company and Barfield came the farthest, from Spokane, Washington, to the 50th anniversary.

Barfield remembered dancing at the Los Angeles Religious Education Congress. "It is not our dance ability, it is God touching these people," he said. "We help people find that sense of God."