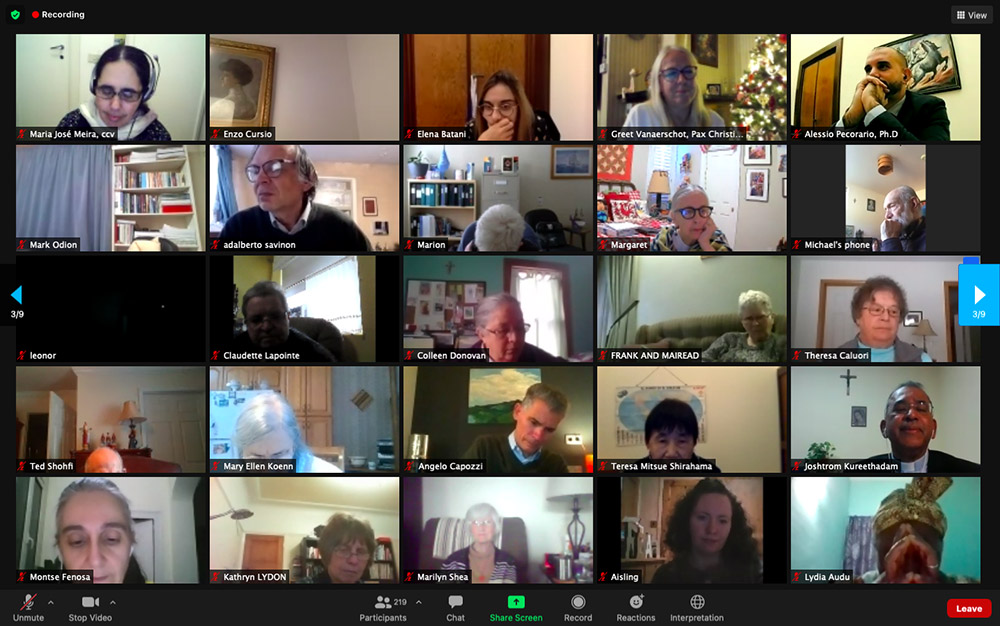 Some of the more than 600 participants in the Retreat on Gospel Nonviolence Dec. 18 are seen in a Zoom screenshot. (Pax Christi International)

The movement within the Catholic Church to reclaim Gospel nonviolence received a jolt of energy and momentum recently in the form of a Retreat on Gospel Nonviolence. The three-hour Dec. 18 event featured a cavalcade of leading practitioners and teachers of nonviolence from all around the world.

Organized by Pax Christi International and its Catholic Nonviolence Initiative in cooperation with the Vatican's Dicastery for Promoting Integral Human Development, the retreat was conducted over Zoom across 10 time zones in English and translated simultaneously into French and Spanish. More than 600 retreatants participated from all over the world.

Among the presenters was Mairead Corrigan Maguire, the Nobel Prize winner from Northern Ireland. She explained how nonviolence did what violence could not — bring peace to her land.

Bernice King, the daughter of the Rev. Martin Luther King and head of the King Center, presented her father's message, showing how opponents really can be turned toward friendship.

Msgr. Bruno-Marie Duffé, secretary of the Vatican's Dicastery for Integral Human Development, demonstrated how forgiveness works as a key element in effective nonviolence.

Fr. Emmanuel Katongole from the University of Notre Dame told stories of people all across Africa wielding nonviolence as a fundamental spirituality and a power for social change.

Alessio Pecorario and Salesian Fr. Joshtrom Kureethadam, also leaders in the Dicastery for Promoting Integral Human Development, showed how nonviolence brings authentic security to the world and how nonviolence is fundamental to saving our common home.

The retreat was especially impactful for three reasons, in addition to the powerful presentations.

First, our leaders showed great imagination and gumption in pulling off such a world-spanning gift. How can one not appreciate and celebrate that kind of leadership?

Second, along with the three-hour retreat, leadership developed and sent out to registrants four short videos featuring on-the-ground practitioners telling their stories of confronting violence with nonviolence and how they came to embrace nonviolence as a way of life. The stories come from practitioners in the Philippines, Fiji, Palestine, Kenya, the south side of Chicago, Cameroon and Mexico. Through these stories, one can see that nonviolence as a power for change, as a spirituality and a way of life, can and is taking root in the hearts of many, many people around the world. If/when the pope issues an encyclical on nonviolence, he will find a warm, welcoming spirit alive and well in the Catholic community and beyond.

Third, the number of registrants was stunning. Six hundred participants, spanning the globe. The grassroots are clearly kicking into gear. The dream of nonviolence, church wide and parish deep, is coming into focus.