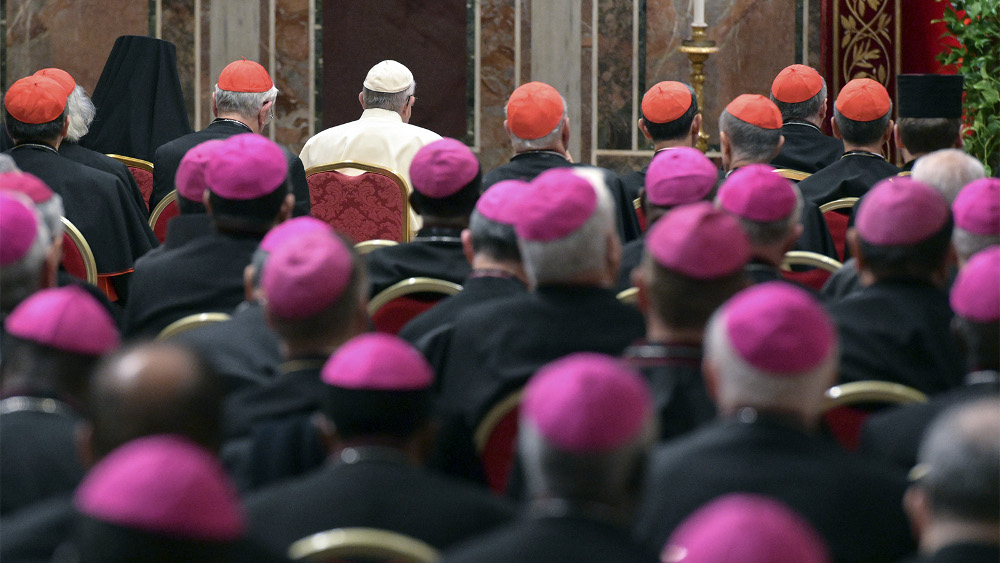 If Catholic bishops hope to reclaim their moral credibility after revelations about covering up clergy sexual abuse, the hierarchy might start by sending a simple but potent message: Church leaders should take a year of abstinence from preaching about sex and gender.

It might seem obvious that a church facing a crisis of legitimacy caused by clergy raping children would show more humility when claiming to hold ultimate truths about human sexuality.

Instead, in the past month alone, a Rhode Island bishop tweeted that Catholics shouldn't attend gay pride events because they are "especially harmful for children"; a Vatican office issued a document that described transgender people as "provocative" in trying to "annihilate the concept of nature"; and a Catholic high school in Indianapolis that refused to fire a teacher married to a same-sex partner was told by the Archdiocese of Indianapolis that it can no longer call itself Catholic.

There is an unmistakable hubris displayed when some in the church are determined to make sexuality the lynchpin of Catholic identity at a time when bishops have failed to convince their flock that they are prepared to police predators in their own parishes.

Even before abuse scandals exploded into public consciousness more than a decade ago, many Catholics were tuning out the all-male hierarchy's teachings on sexuality. Surveys show the vast majority of Catholics use birth control and nearly 70 percent now support same-sex marriage.

This isn't simply a matter of the church's image, however. When the Catholic Church describes sexual intimacy between gay people as "intrinsically disordered," it fails to take into account how this degrading language contributes to higher rates of suicide among LGBTQ people; when it condemns even civil recognition of same-sex unions that don't impede the church's ability to define marriage sacramentally, bishops appear indifferent to the roadblocks committed couples without marriage licenses face in hospitals and other settings.

Unless church leaders are content to drive away a generation of young people, these positions are self-inflicted wounds. Millennial Catholics understandably ask why centuries of Catholic teaching on human dignity and justice don't apply fully to their LGBTQ friends, family members and teachers. Those who are raised Catholic are more likely than those raised in any other religion to cite negative religious treatment of gay and lesbian people as the primary reason they leave, according to the Public Religion Research Institute.

A document on gender identity released earlier this month from the Vatican's congregation for Catholic education, titled "Male and Female He Created Them," underscores why we need a break from lofty church pronouncements on these issues. The document is right in its call for respectful dialogue with LGBTQ people, but the work itself fails to reflect that ideal.

The authors clearly didn't spend time with transgender Catholics. There was no apparent effort to engage with modern science or contemporary medical insights about gender development. It feels as if it was written in a bunker sealed off from the world in 1950.

Ray Dever, a Catholic deacon who has a transgender daughter and who ministers to Catholics with transgender family members, called the document "totally divorced from the lived reality of transgender people."

Dever added, "I think that anyone with first-hand experience with gender identity issues will confirm that for an authentically transgender person, being transgender is not a choice, and it is certainly not driven by any gender theory or ideology."

While abstract Vatican musings on sex and gender are unhelpful, the church faces a more urgent crisis in the making in the firing of LGBTQ employees at Catholic schools. In a rare display of defiance, Brebeuf Jesuit Preparatory School in Indianapolis clashed with Archbishop Charles Thompson, who wanted the independently operated school to terminate an employee who is civilly married to a person of the same sex. The school refused, and the archbishop now says the school can no longer call itself Catholic. Brebeuf Jesuit's supervisory body, the Midwest Province of Jesuits, said the decision will be appealed through a church process all the way to the Vatican if necessary.

"We felt we could not in conscience dismiss him from employment," Fr. William Verbryke, president of Brebeuf, told the Jesuit publication America magazine earlier this week, explaining that the teacher in question does not teach religion and is not a campus minister.

After the Jesuit school's decision became national news, another Indiana Catholic high school announced it was complying with the archdiocese and dismissing a teacher in a same-sex marriage. Administrators at Cathedral High School called it "an agonizing decision" and wrote a letter to the school community. "In today's climate we know that being Catholic can be challenging and we hope that this action does not dishearten you, and most especially, dishearten Cathedral's young people."

In recent years, more than 70 LGBTQ church employees and Catholic school teachers have been fired or lost their jobs in employment disputes. Heterosexual Catholics who don't follow church teaching that prohibits birth control or living together before marriage, for example, are not disciplined the same way by Catholic institutions. The scrutiny targeting gay employees alone is discriminatory and disproportionate.

Efforts to narrow Catholic identity to a "pelvic theology" hyperfocused on human sexuality raise questions about what Christians should be known for as we seek to live the gospel. Are Catholic employees at schools and other Catholic institutions evaluated for how often they visit the imprisoned, care for the sick, treat the environment well, confront inequality? All of these moral issues are central to papal encyclicals, centuries of Catholic social teachings and the ministry of Jesus.

"We cannot insist only on issues related to abortion, gay marriage and the use of contraceptive methods," Pope Francis said in one of his first interviews after his election. "The church's pastoral ministry cannot be obsessed with the transmission of a disjointed multitude of doctrines to be imposed insistently. We have to find a new balance; otherwise even the moral edifice of the Church is likely to fall like a house of cards."

A year of abstinence for church leaders preaching about sex would demonstrate a symbolic posture of humility that could substantively show those of us still left in the pews that the hierarchy isn't completely clueless to the stark reality of the present moment.

During their silence on sex and gender, Vatican and local Catholic leaders should get out of their comfort zones and conduct listening sessions with married, divorced, gay, straight and transgender people. They should step away from the microphone and take notes. There would be disagreement, but the simple act of flipping the script — priests and bishops quietly in the back instead of holding forth up front — might help clergy recognize there is a wisdom in lived reality and truth not found solely in dusty church documents.

Taking risks and sitting with discomfort is part of a healthy faith. It's time for our bishops to lead by taking a step back.