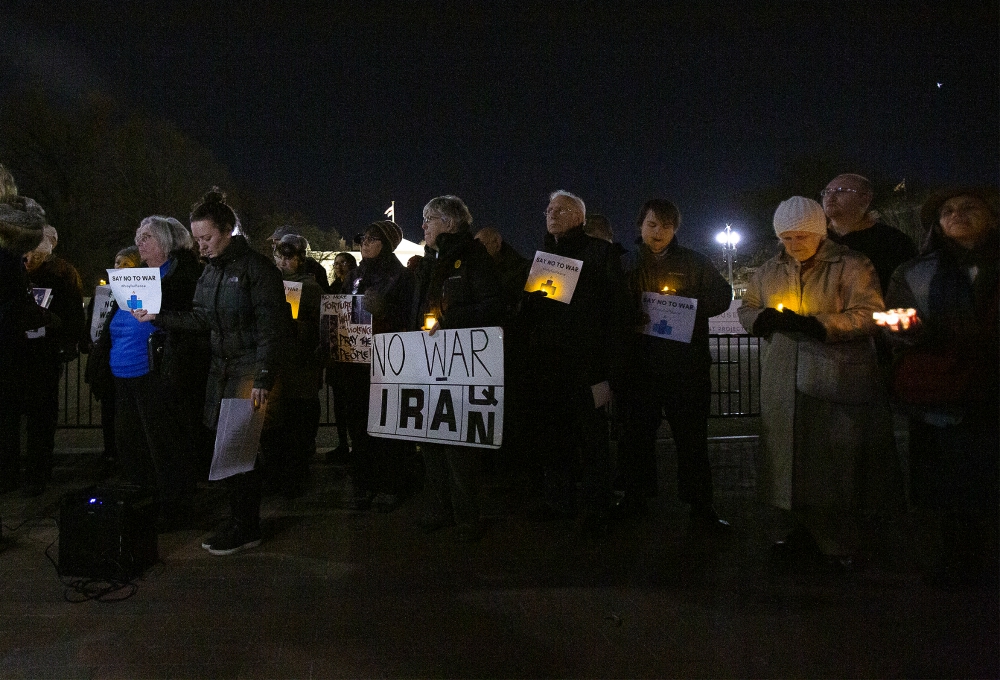 People gather Jan. 6 near the White House in Washington during a candlelight vigil to call for peaceful solutions to rising tensions between the United States and Iran. (CNS/Tyler Orsburn)

Celebrating the World Day of Peace, each Jan. 1, is not always so peaceful.

"Oftentimes, the sad contradiction is that on a day that should be dedicated for peace, we actually find ourselves reflecting on so many areas of discord, violence, hate and lack of peace," McClory told his congregation at the National Shrine of the Little Flower in Royal Oak, Michigan.

Recent news headlines have been dominated by a noticeable lack of peace.

Following the Jan. 3 killing of Iranian Maj. Gen. Qassem Soleimani, many have feared that heightened tensions between the United States and Iran could escalate into outright war, with both countries issuing brazen threats toward the other. And in New York, a machete attack against Hasidic Jews at a Dec. 28 Hanukkah celebration was the latest in a string of violent anti-Semitic incidents.

Across the country, homilists and parishioners alike have been considering how disturbing developments in current events should or shouldn't be addressed in homilies.

On Jan. 6, NCR Executive Editor Tom Roberts emailed NCR Forward members asking if a homilist at their church had addressed either or both of these topics — Iran or anti-Semitism. Thus far, NCR has received several dozen responses from laypeople, sisters and priests from all over the country.

The range of responses highlights the dilemma some priests face in preaching about current events, and the desire of many churchgoers to hear the Gospel message connected to the real world. 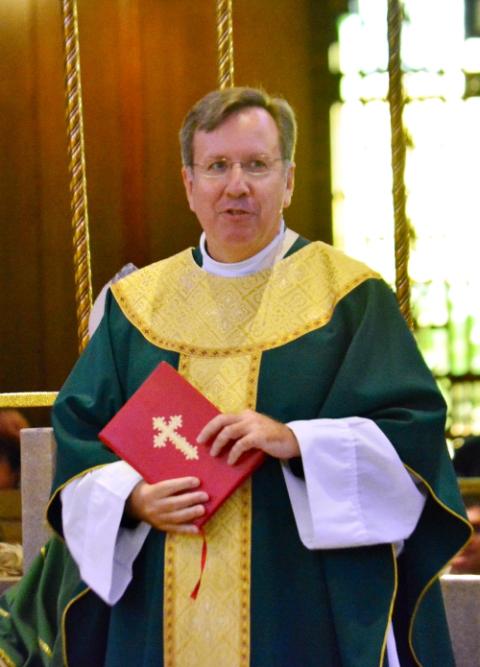 McClory, who is also the bishop-elect of the Diocese of Gary, Indiana, was one preacher who decided to incorporate the news into a homily.

"We have this obligation this day, as we celebrate our Jewish Savior, to be in solidarity with our Jewish brothers and sisters," McClory said in his homily. An NCR Forward member alerted us to a recording of the homily posted on the church's website.

Typically, McClory prepares his homilies by starting with the core Gospel message and then drawing examples from current events, he told NCR in an email. For his World Day of Peace homily, however, he worked backward, and instead began with the "goal of addressing anti-Semitism in light of recent events."

McClory had two motivations for this. The first was a Dec. 29 message from Detroit Archbishop Allen Vigneron asking clergy "to reaffirm for the congregation that all forms of anti-Semitism are evil and have no place in our community." And second, McClory wanted to address his parish's unique history with anti-Semitism.

The National Shrine of the Little Flower, McClory's parish, was founded by Fr. Charles Coughlin, a man famous for broadcasting anti-Semitic rhetoric to mass audiences over the radio in the 1930s. Coughlin was eventually forced off the air in 1939.

In his homily, McClory told the story of meeting a Jewish woman who, a couple of years ago, was nervous about visiting the shrine for an interfaith event because of its anti-Semitic history. The anecdote was meant to show his community "that we still live in the legacy and have to acknowledge the source of pain for our Jewish brothers and sisters."

McClory's homily received overwhelmingly positive reactions from both his parishioners and Jewish friends alike, he said. "No negative reaction at all," he told NCR.

Addressing news events in homilies is not the only way church leaders can speak out on issues. A number of readers noted that their priests offered prayers for peace related to either the Iran conflict or anti-Semitism. And on Jan. 5, New York Cardinal Timothy Dolan and Bishop Nicholas DiMarzio of Brooklyn participated in a massive "Solidarity March" protesting anti-Semitism.

Still, many parishioners who followed up with NCR expressed dismay that their preachers did not address recent events in their homilies.

"We heard that we are living in dangerous times, but nothing that would be of help in putting the current situation in the context of the Gospel and Catholic social teaching," said Tom McGuire, member of St. Pascal Church in Chicago.

McGuire told NCR he believes that if homilies connected the Gospel more effectively to concrete situations — and how people are called by Christ to act — "we would have a source of light when it comes to making political decisions."

He added that he feels parishioners have limited knowledge of Catholic social teaching but are often left on their own to make political decisions about such important issues as war, poverty and the environment.

But incorporating the news into homilies is no simple matter.

Among those responding to the NCR survey were several priests who appeared to be wrestling with their decisions not to reference current events. Some even expressed remorse.

"Due to the fact that things are so divided in the U.S., I am often hesitant to enter into anything perceived as political but at the same time I am uncomfortable with my silence," wrote one priest who asked that his name not be published.

At the root of the priests' concerns seemed to be the fear that their homilies might lead to further divisiveness in their communities and society at large.

Fr. Mike Barrett told NCR he did not mention either Iran or anti-Semitism in his homily at St. Joseph Chapel of the School Sisters of St. Francis in Milwaukee this past weekend. He wrote that doing so in a battleground state, as well as a "battleground church," would have been a "recipe for rejection, anger and the further political polarization." In other words, he said: "Prophetic suicide."

According to Ann Garrido, professor of homiletics at the Aquinas Institute of Theology in St. Louis, some people have a misconception that preaching on political issues is inappropriate. This stems from fears that "political preaching" might attack a group of people or violate the autonomy of the congregation.

Garrido said she likes to define politics as "the art of trying to figure out how to live as a community." By that definition, political preaching is "appropriate all the time."

Garrido mentioned a few guidelines homilists could follow when preaching on the news. First, she said homilists should make sure to pray before preaching. Next, always take an approach of curiosity and humility. This includes presenting questions and concerns in the first person and "representing the other point of view in a way that they themselves would be able to recognize."

Garrido said that political preaching is not only possible but necessary.

"I do think right now, as Catholics in this country, we are living in a moment of time in which, when future generations look back at us ... they will wonder why we did not say more," Garrido said. "It seems to be a decisive moment."

In his homily on anti-Semitism, McClory publicly acknowledged his own grappling over the significance of his message. He told his congregation that he doesn't typically preach to the headlines. "But today I feel we must, because we build peace relationship by relationship, one by one," he said.

[Jesse Remedios is an NCR staff writer. His email address is jremedios@ncronline.org. Follow him at @JCRemedios.]