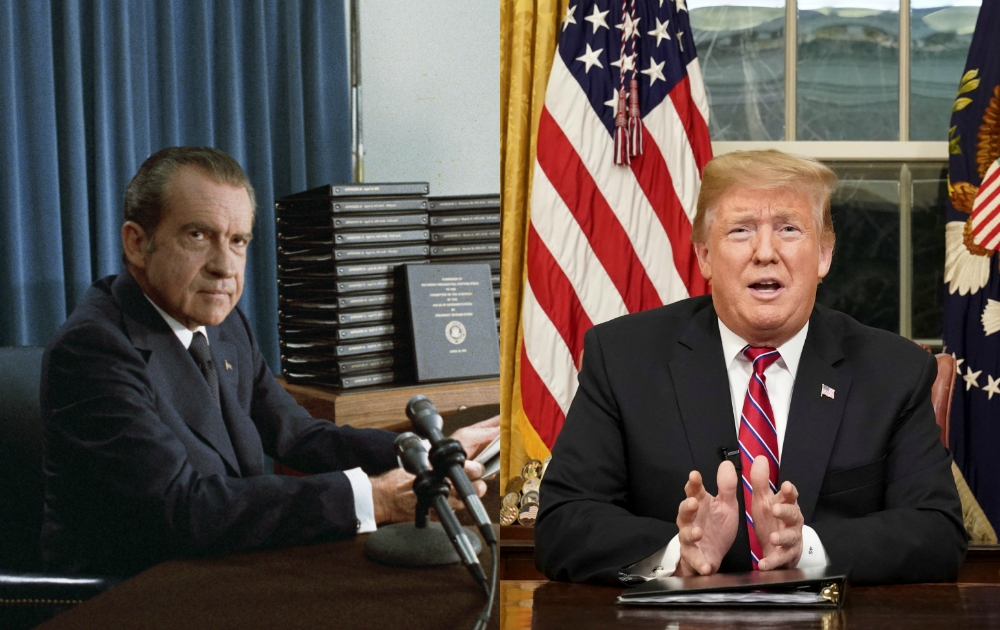 As the possibility of Donald Trump's impeachment keeps roiling American politics, allusions are made to the 1970s, when Richard Nixon became the first president to resign rather than face an impeachment vote in the Senate. Nixon and Trump: what a pair. But the similarities they share go well beyond impeachment questions.

In the 1950 California Senate race, Nixon's opponent was liberal Democrat Helen Gahagan Douglas, a three-term member of the House of Representatives. One of Nixon's campaign advisers was Murray Chotiner, a right-wing zealot who believed that "the purpose of an election is not to defeat your opponent but to destroy him."

Nixon's destructiveness toward Douglas peaked when he knifed her with the claim that she had "communist sympathies" and was soft on the Soviet Union. Nixon smeared her as "the Pink Lady" and then went further: "She's pink right down to her underwear."

Nixon won the election, and two years later he became Dwight Eisenhower's vice president and joined the crusade to rid the federal government of pinkos.

Trump, a thrice-married womanizer who bragged to Billy Bush in an "Access Hollywood" tape that his fame allowed him to "do anything" to women, including grabbing them by their genitals, has called women fat pigs, slobs and dogs.

Not counting insults to many of the 22 women who have accused Trump of sexual misconduct, there was Crooked Hillary, "a nasty woman." Maxine Waters is "an extraordinary low IQ person," Mika Brzezinski "off the wall, a neurotic and not very bright mess." Of Carly Fiorina: "Look at that face. Would anyone vote for that?" Stormy Daniels is a "horseface," presumably not when Trump was allegedly bedding her.

Of his latest accuser, Trump denied an assault: "She's not my type." Perhaps at his next rally, he'll tell the base which type he's hot for.

Both loathed the Washington press corps, with the ferocity prize going to Nixon.

Trump is little more than a ranting bellower when he tweets, "I just cannot state strongly enough how totally dishonest much of the Media is. Truth doesn't matter to them, they only have their hatred & agenda." On June 15, he damned The New York Times for committing "a virtual act of Treason" for its story on U.S. cyber attacks on Russia.

Nixon, a gut-puncher, went well beyond such mouthings. He ordered the phones of both broadcast and print journalists to be tapped by the FBI and tax returns investigated by the IRS. He told his press secretary, "No reporter from The Washington Post is ever to be in the White House again. And no photographer."

Nixon had an "enemies list" that included Pulitzer Prize winners Mary McGrory and Garry Wills. Its purpose, according to a Nixon administration official, was "how we can use the available federal machinery to screw our political enemies."

And this on Nixon's secret self-recorded Oval Office tapes: "It's the responsibility of the media to look at the government generally, and particularly at the president, with a microscope ... but, oh boy, when they use a proctoscope, that's going too far."

Both had advisers who ended up imprisoned for federal crimes such as conspiracy and perjury.

Nixon tops the leaderboard: nine allies who were caged for a combined 100.5 months. Among them were Attorney General John Mitchell and Charles Colson, the Oval Office hitman who was said to have once thumped his chest: "I'd walk over my own grandmother if necessary to re-elect Richard Nixon."

Both bungled south of the border problems.

Fifty years before Trump kept failing to build a wall to keep out those Mexicans he saw as criminals, rapists and drug dealers, Nixon launched in 1969 Operation Intercept. The program was set up in border-crossing stations from San Diego to Brownsville, Texas, and watched over by custom and patrol agents with the goal of blocking the flow of marijuana and heroin into the U.S.

G. Gordon Liddy, later convicted as one of the Watergate burglars but then a Treasury Department official, had sought to engage Mexican officials in capturing drug smugglers. They demurred, leading Liddy to write in his autobiography, "The Mexicans, using diplomatic language of course, told us to piss up a rope. The Nixon administration didn't believe in the United States' taking crap from any foreign government. Its reply was Operation Intercept."

In less than a year, and with little success in stopping the flow, the program ended.

Trump's policies on immigration, deportation and asylum have prompted such groups as the Congressional Hispanic Caucus to see them as racist, xenophobic, cruel and ineffective. The detention sites for those fleeing their violent homelands are now being called concentration camps or prisons.

Taped in February 1973 while talking to Charles Colson, Nixon grumbled that "all ethnic groups" have certain traits. "The Jews have certain traits. … For example, the Irish can't drink. What you always have to remember with the Irish is that they get mean. Virtually every Irish I've known gets mean when he drinks. Particularly the real Irish." Next, the Italians: "Those people course don't have their heads screwed on tight." And after them, the deep thinkers: "God, I hate spending time with intellectuals. There's something feminine about them. I'd rather talk to an athlete."

A former employee recounted that Trump, speaking about the financial managers at one of his casinos, growled about "black guys counting my money. I hate it. The only kind of people I want counting my money are short guys that wear yarmulkes every day. ... I think that the [black] guy is lazy. And it's probably not his fault, because laziness is a trait in blacks."

Nixon's major deceit was his November 1973 claim, "I am not a crook" when denying he had any role in the Watergate crimes. As it eventually came out, he did.

Early in Trump's presidency, The Washington Post had only one fact checker to tally the serial lies. But the torrent was so unceasing, whether on tweets, speeches or quickie White House lawn statements, the paper now has a team of three. The lies now exceed 10,000, whether they are called falsehoods, disinformation or misleading claims.

To repeat, Nixon and Trump: what a pair.