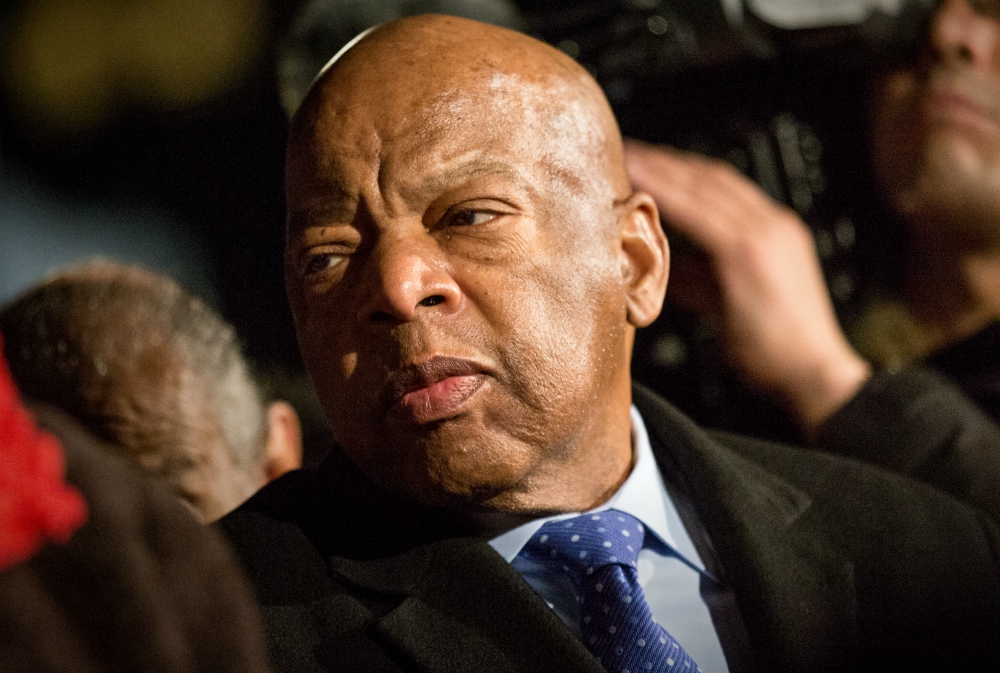 It was painful to learn that civil rights hero and Georgia Rep. John Lewis died July 17 from pancreatic cancer. He was the last surviving speaker from the 1963 March on Washington, but was best known for leading the civil rights march across the Edmund Pettus Bridge in Selma, Alabama, in 1965 on what would become known as "Bloody Sunday." John was among the marchers beaten by state police that day and suffered a fractured skull.

John would later lead civil rights pilgrimages to Alabama to bring his colleagues in Congress, civil rights luminaries, and faith, business and labor leaders together to reflect on a time when our country came together to overcome a difficult crisis. I had the privilege of working with John on those pilgrimages when I served as president of the Faith & Politics Institute.

The pilgrimages were also an opportunity for the participants to ask themselves what reconciling work remained to be done in our own time. Every year as we finalized our program, John would say: "One more time to Alabama." He referred to the sites on those pilgrimages as "holy ground." He believed the journey had lessons to teach us still.

At the Civil Rights Memorial fountain in Montgomery, Alabama, designed by Maya Lin, I watched John standing quietly with his hand dipping in the water touching the engraved names of those who had given their lives in the fight for civil rights.

He slowly touched each name, and I heard him say softly," I knew so many of them." 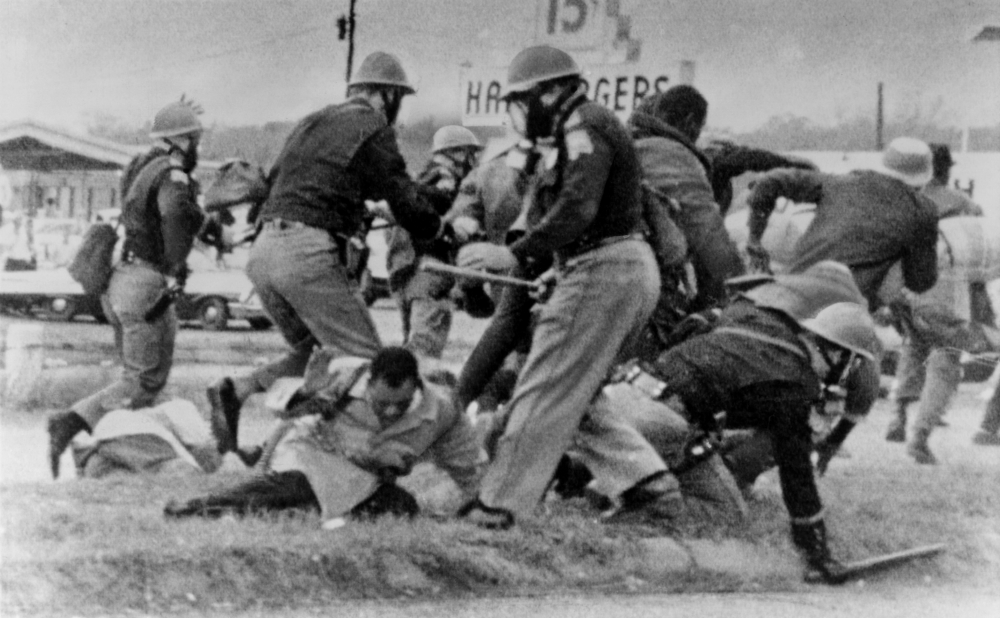 An Alabama State Trooper swings his club at John Lewis' head during the civil rights march across the Edmund Pettus Bridge in Selma, Alabama, on May 7, 1965. (Newscom/Everett Collection) 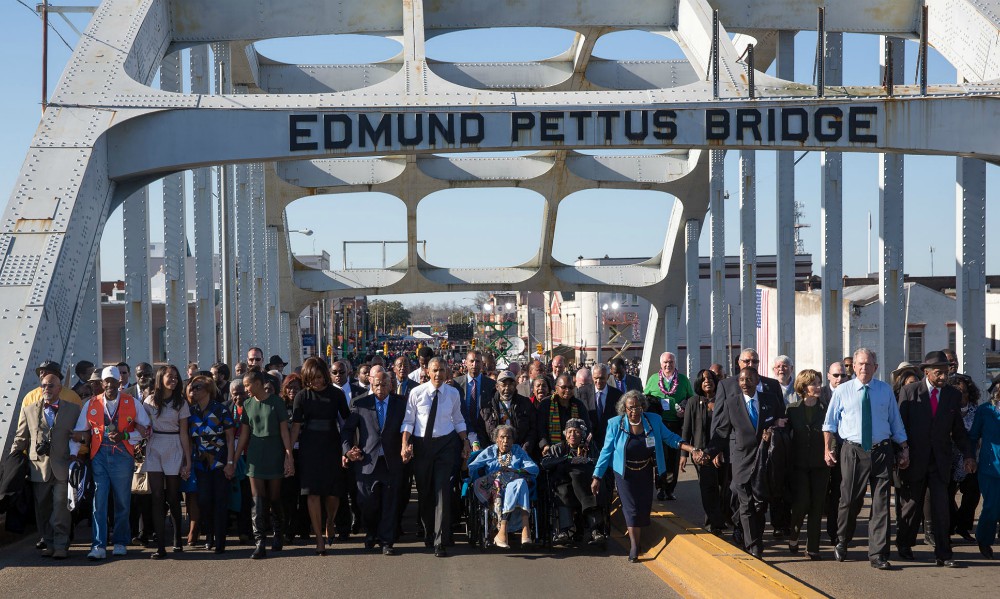 John Lewis walks between first lady Michelle Obama and President Barack Obama during a walk across Edmund Pettus Bridge to commemorate the 50th anniversary of the "Bloody Sunday" march from Selma to Montgomery, in Selma, Alabama, on March 7, 2015. (Obama White House/Pete Souza)

Selma, the Brown Chapel and the Edmund Pettus Bridge were the culmination. The pilgrimages stirred memory, and many folks came back year after year, but these pilgrimages were no mere walk down memory lane. One year, Alabama Troopers were lined up. The commander came forward to give John an apology and a welcome to Alabama.

Another time John welcomed Elwin Wilson to the pilgrimage. Wilson was the former Klansman who beat Lewis in 1961 when John's Freedom Ride bus stopped in Rock Hill, South Carolina. In 2009, Wilson experienced a conversion of heart. He traveled to Washington to apologize to John, who invited him to come to Selma as a testimony to the power of reconciliation and the Beloved Community.

Another year, former Alabama Gov. George Wallace's daughter, Peggy Wallace Kennedy, came to walk together with John across the bridge. For John, the movement was always about the Beloved Community, about reconciliation, no matter how long it takes. The pilgrimages were a vehicle for that. One year, the two congressional co-leaders were House Democrat Steny Hoyer and House Republican Mike Pence. As a clergyman, I saw John as a true spiritual leader, a moral leader, in these moments. There was a grace at work in him.

In 2010, when I was invited to join the team at UniteHere International Union to take up the fight for immigration reform, I went to see John, along with my predecessor at the Faith & Politics Institute, the Rev. W. Douglas Tanner Jr. John was quite familiar with UniteHere, having served as co-chair of the union's immigration freedom ride in 2003 with then-union leader Maria Elena Durazo, now a California state senator.

John listened to my discernment about what I felt was a new "call." After a moment of silence, he looked me in the eye and said: "Father, the immigration movement is the next chapter in the civil rights movement. You have heard the trumpet call. And you must answer." In our spiritual traditions, that is what we call confirmation of a call!

In 2013 along with 200 others, I was arrested with John in front of the Capitol Building. We spent the next 10 hours or so in lockup, protesting the inaction of the House of Representatives to pass a comprehensive immigration reform bill. That was just one more of those many examples of what John Lewis called "getting into good trouble."

John often said, "You got to keep your eyes on the prize." The prize we need to keep our eyes on is the Beloved Community.

We are a poorer nation today for the passing of John Robert Lewis. And yet, we are richer for his pointing us toward the Beloved Community — and for calling us in our fractured times to be a nation at peace with itself.

Let me end with these words of challenge and encouragement that Lewis tweeted out not so long ago:

"Do not get lost in a sea of despair. Be hopeful, be optimistic. Our struggle is not the struggle of a day, a week, a month, or a year, it is the struggle of a lifetime. Never, ever be afraid to make some noise and get in good trouble, necessary trouble."

[Fr. Clete Kiley is a priest of the Chicago Archdiocese who served as the president and CEO of the Faith & Politics Institute in Washington and currently serves as a senior adviser at UniteHere International Union.]