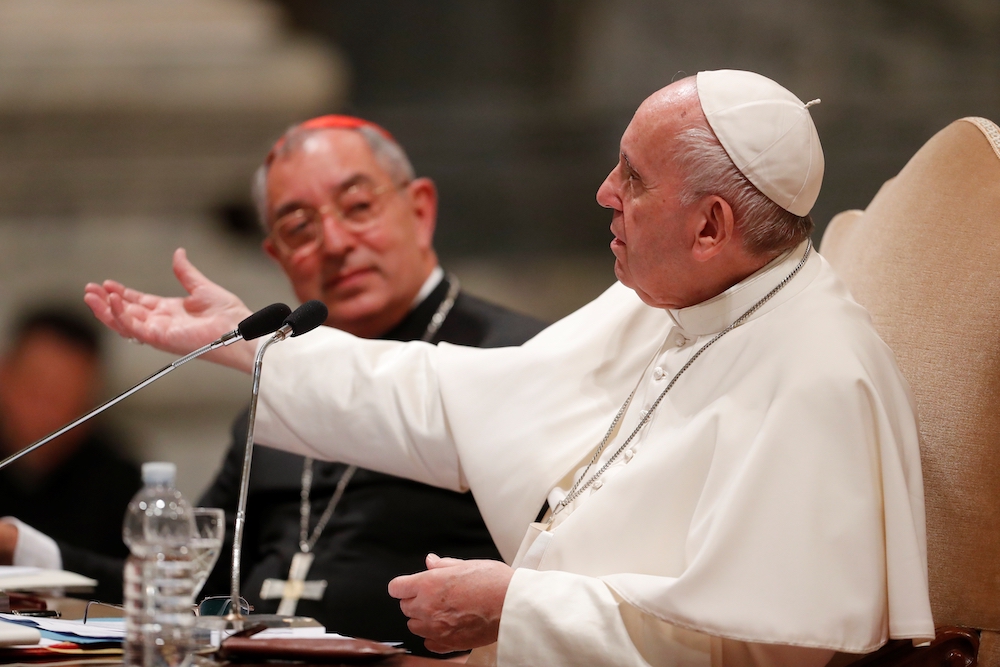 Pope Francis gestures as he addresses more than 1,000 diocesan leaders, both clergy and laity, May 9, 2019, at the Basilica of St. John Lateran, the cathedral of the Diocese of Rome. Seated next to the pope is Cardinal Angelo de Donatis, vicar of Rome. (CNS/Remo Casilli, Reuters)

When Pope Francis said he did not want to clericalize the laity, he meant it. Now, while too many bishops have their cinctures in a knot over who can approach Communion, the 266th successor of St. Peter is redesigning the church.

It all began with the Second Vatican Council. Then, in 1972, Pope Paul VI suppressed the minor orders in response to the windstorm that was the council, instead creating two "installed" lay ministries: lector and acolyte.

Installed lectors and acolytes were to take up the duties once performed by the lectors, porters, exorcists and acolytes of the medieval church, who by modern times received minor orders on their way up the clerical ladder. While he was at it, Paul suppressed the major order of sub-deacon, now fondly remembered mainly by Tridentine Mass aficionados. The subdiaconate was the final step in the now abandoned cursus honorum (course of honor) before the major order of deacon.

By the late Middle Ages, no one became a cleric (through tonsure) and entered the cursus honorum unless he was on the way to priesthood. No matter the history of women deacons. No matter that the diaconate was a once functioning reality. No matter that some 37 popes were deacons before becoming bishops of Rome. That all ended anyway with Gregory VII, an archdeacon at the time of his 1073 election. Gregory insisted on priestly ordination prior to his episcopal consecration.

In the present, Francis, whose seeming resistance to some requests of the Amazon synod has caused not a small amount of heartburn, is working quickly to restore the church as a functioning and cooperative body of believers.

While Francis did pass over some requests of the Amazon synod, notably for married priests and women deacons, he has set a laser focus on function, rather than functionality. His beautiful Querida Amazonia, in response to the Amazon synod's final document, reminded the whole church that Canon 517.2 recognized parish life coordinators — some religious, some secular, some men, some women, some married, some ordained deacons — who hold parishes together, maintaining them as vibrant communities. He wants them recognized, professionalized and paid.

It is not about who can do everything, like the medieval priests who essentially arrogated to themselves the duties of all the other orders — major and minor — ensuring that their priesthood was the principal seat of power. It is about the members of the whole church picking up their baptismal promises and running with them.

Consider this: on Jan. 11 this year, Pope Francis opened to women the "installed" lay ministries of lector and acolyte, previously restricted to men (mostly men training to be deacons and priests).

Then, just the other day, Pope Francis responded to an idea that sat untouched since the council and established the installed ministry of catechist. The pope called for "men and women of deep faith and human maturity, active participants in the life of the Christian community, capable of welcoming others, being generous and living a life of fraternal communion." In so doing, he put his finger on the failures of "twinned" or "yoked" parishes, where one pastor and his personal staff manage multiple communities, which in and of themselves are essentially leaderless.

Francis' ecclesiology prefers communities of believers gathered around the Gospel and the Eucharist with everyone participating. He sees many flowers in the church's fields: lectors, acolytes, catechists, pastoral life coordinators, deacons and priests, all in particular churches led (not managed) by bishops.

Of course, someone has to coordinate the (hopefully paid) ministries at every level, but the smaller the parish the greater the coordination. This motu proprio document on catechists does not eliminate ordination as necessary for sacramental ministry, but it expands the notion of evangelization. Yes, the ordained can evangelize, but the specific training, skills, personalities and availabilities required for actual catechesis may be better found among the laity.

Lay ministry is real ministry, and the focus here is on the Gospel. It is about synodality. It is about evangelization. Without these, there will be no church.

A version of this story appeared in the June 25-July 8 print issue under the headline: Francis is redesigning the church with new lay ministries.