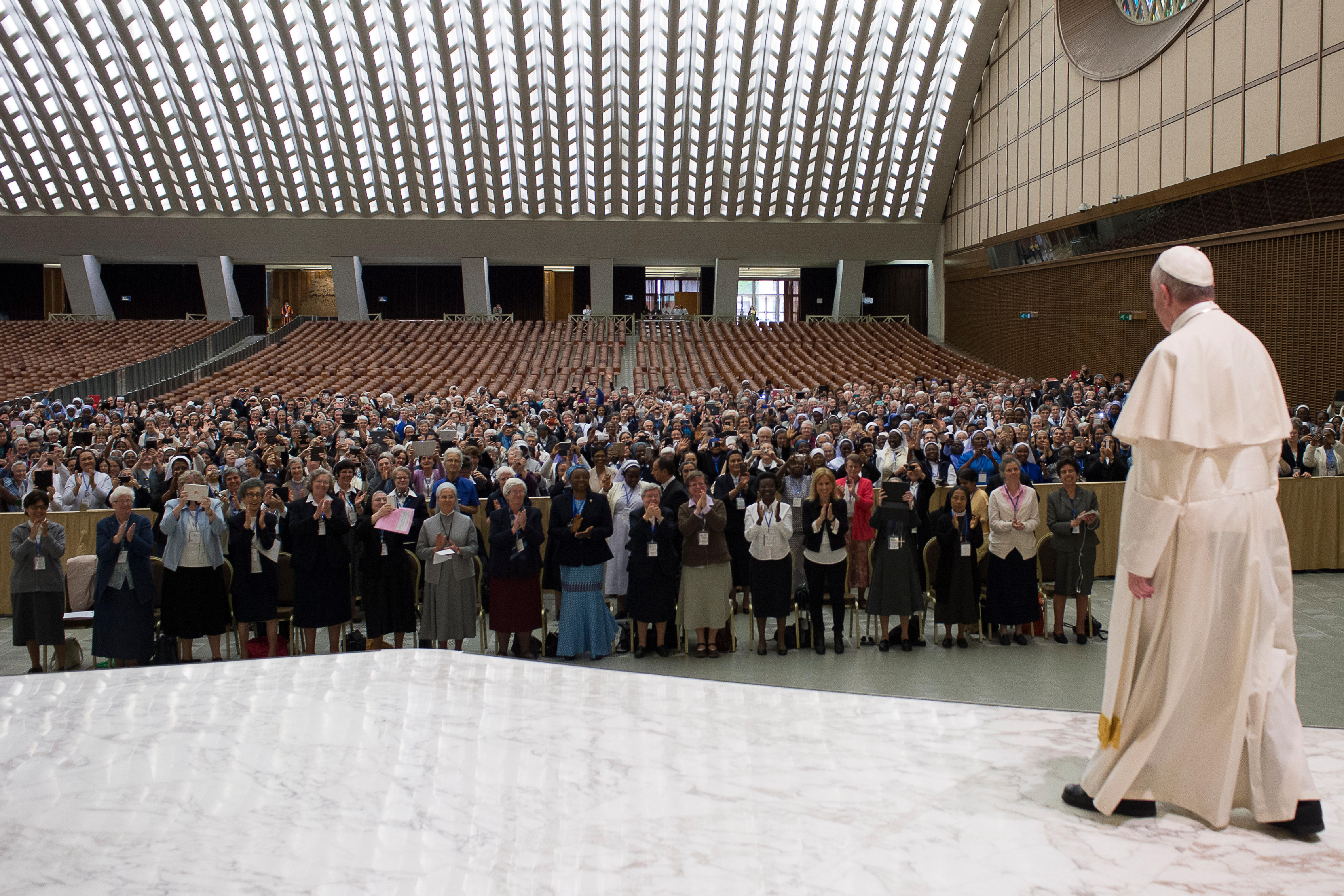 Pope Francis arrives for an audience with the heads of women's religious orders in Paul VI hall at the Vatican May 12, 2016. During a question-and-answer session with members of the UISG, the pope said he was willing to establish a commission to study whether women could serve as deacons. (CNS photo/L'Osservatore Romano)

The question of women deacons has nothing to do with women priests.

Well, to begin with, historical documents — canons, liturgical texts, and other writings — speak freely and regularly about women deacons, not priests, "ordained" or "blessed." Facts are facts.

Fact #1: The terms "ordained" and "blessed" were used interchangeably in both the East and the West. For example, Canon 21 of the Council of Auxerre (561-605), about 100 miles southeast of Paris, places restrictions on a priest "once he has received the benediction." We see the same for women deacons: some documents call them "ordained," some call them "blessed." A few revisionist historians have attacked the evidence. A New York seminary priest-professor insists women were "only" blessed. His authoritative text is a book published in 2000 by a former prefect of the Congregation for the Doctrine of the Faith, Cardinal Gerhard Müller. More about that book later.

Fact #3: Women deacons were involved in liturgical tasks. We know women were at the altar "doing what men do" because Pope Gelasius I complained about it in the 5th century, and some later popes and bishops repeated his argument. But there is no evidence they were priests. Later complaints document women handling sacred vessels and priestly vestments, much like sacristans. Others focused on women deacons offering the chalice to the faithful. The problem was women — still "unclean" in many cultures — being near the sacred.

Fact #4: The so-called "transitional diaconate" ended the practice of ordaining women as deacons. Three grades of order were known to the early church, but the lockstep progression of deacon-priest-bishop was not. As the priesthood absorbed the tasks and duties of the diaconate, only men destined for priesthood could be ordained as deacons. Because women were not so destined, we have little evidence of women ordained as deacons beyond the 12th century or so in the West.

Fact #5: One result of the Second Vatican Council is the restoration of the diaconate as a permanent vocation, now lived by more than 45,000 men worldwide and some 18,000 in the United States. While at least two council fathers attempted to include women in the restored diaconate, only after the Council closed did Pope Paul VI manage to get a definitive answer on the history of the work of women deacons and the facts of their ordinations. The answer, rendered by a member of the International Theological Commission, Cipriano Vagaggini, was "yes." That is, women were ordained and functioned as deacons.

Fact #6: Unlike the various statements about women priests, the church has not overruled restoring the tradition of ordaining women as deacons. In years gone by, from time to time and place to place one or another local bishop or synod outlawed the practice, but even these were merely ecclesiastical laws, not theological determinations. In 2002, the most recent International Theological Commission document argued: 1) women deacons were not the same as men deacons; 2) the church's tradition clearly distinguishes priesthood and diaconate; 3) this is something the magisterium must decide.

Which is where we are now. Two successive pontificates — those of John Paul II and Benedict XVI — have left the matter dormant, following the 2002 ITC document, which Müller had a hand in writing. The document includes sentences paraphrased or lifted whole from Müller's book, Priesthood and Diaconate: The Recipient of the Sacrament of Holy Orders from the Perspective of Creation Theology and Christology, which conflates his argument against women deacons with his argument against women priests.

So, what's next? In May 2016, Pope Francis told the assembled membership of the International Union of Superiors General (UISG) he would form a commission to study women deacons. In August that year, he named 12 scholars to The Pontifical Commission for the Study of the Diaconate of Women. For the first time in the church's long history, an official commission was equally male and female. It provided a report for the Holy Father several months ago.

In speaking to media in late June, the current prefect of the Congregation for the Doctrine of the Faith, Cardinal Luis Ladaria, said it was not the place of the Commission to make a recommendation to the Holy Father.

That's up to you.

[Phyllis Zagano is senior research associate-in-residence at Hofstra University in Hempstead, New York. She is a member of the Papal Commission for the Study of the Diaconate of Women. Her books include Women Deacons: Past, Present, Future (recently published in France and Canada as Des femmes diacres). A Study Guide is available for free download at https://people.hofstra.edu/Phyllis_Zagano/]

A version of this story appeared in the Feb 22-March 7, 2019 print issue under the headline: It’s not about women priests.