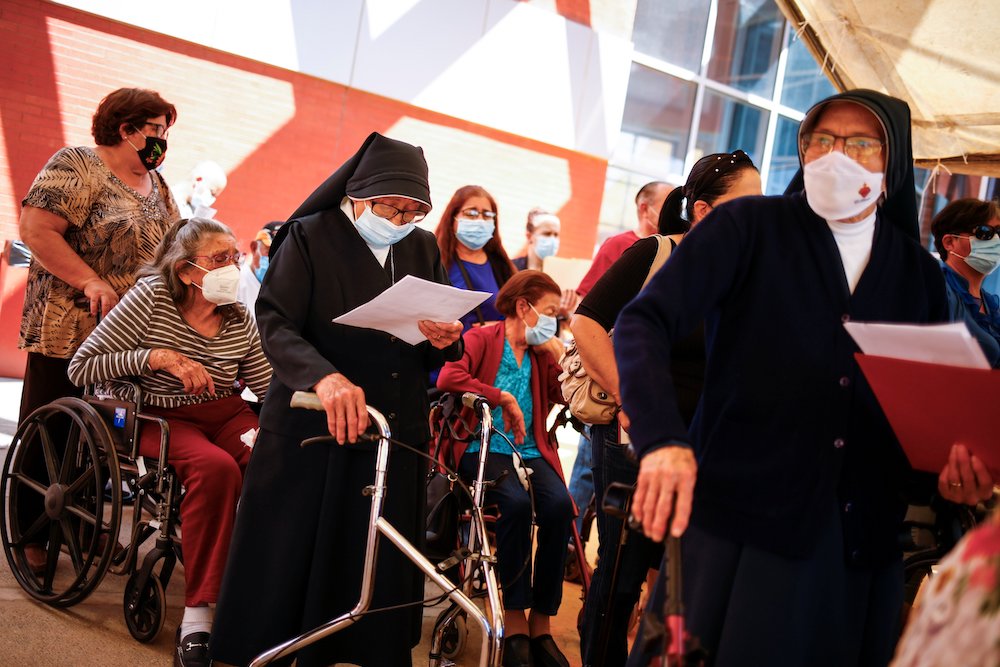 Nuns and others wait in line to receive the AstraZeneca COVID-19 vaccine in Ciudad Juárez, Mexico, April 12, 2021. (CNS/Reuters/Jose Luis Gonzalez )

When my husband and I adopted our daughter from China, one of the immigration requirements was that she receive a number of vaccines before entry into the United States. Because her earlier vaccination documentation was unclear, she had to be re-vaccinated, receiving six shots in one day: Each limb got one jab, and one arm and one leg got two.

She was not happy about all those needle-sticks, and as a new mother, it was hard for me to listen to her screaming. But we did it.

We're hearing a lot about the right to refuse vaccinations these days — sadly from a number of Catholics who mistakenly believe that church teaching prohibits the use of a vaccine that has been tested or created using fetal cell lines from a decades-ago abortion.

On Monday, Bishop Joseph Strickland of Tyler, Texas, the new unofficial leader of the right-wing Catholic crowd, tweeted that he "WILL NOT" (all caps his) take what he calls an "abortion-tainted vaccine," adding that he wished "other bishops had joined me months ago."

Other bishops, in the form of the U.S. bishops' conference, may have botched the communication of their advice to their flock with an unclear public statement in March, but their own internal memo from the doctrine and pro-life committees to their brother bishops was clear:

Some are asserting that if a vaccine is connected in any way with tainted cell lines then it is immoral to be vaccinated with them. This is an inaccurate portrayal of Catholic moral teaching.

Equally clear has been the Vatican's doctrinal office, which in December announced that it is morally acceptable for Catholics to take the vaccines to help end the global pandemic, especially given the "grave danger" of spreading the virus. Pope Francis approved that announcement.

A corresponding member of the Pontifical Academy for Life, writing in NCR, emphasized that all of the vaccines are morally acceptable and pointed out how a zeal to advance the pro-life cause has resulted in a position that is ironically "anti-life."

Getting vaccinated is a life-saving measure, not just for the vaccinated person but for the general population, including those who cannot or will not get vaccinated themselves. The U.S. continues to have the highest COVID-19 mortality in the world, with more than 568,000 excess deaths so far.

To stop the spread of the coronavirus and its emerging variants, an estimated 70% to 90% of the population needs to vaccinated; currently about half of U.S. adults have received at least one shot. As of April 19, all adults were eligible to receive the vaccine, although some cannot receive the vaccine because of their own medical histories or conditions.

But CANNOT is different from WILL not. Such "vaccine hesitancy" has decreased in recent months, according to data from the Centers for Disease Control and Prevention, but it is concentrated in rural and underserved areas and in places where COVID-19 cases are the highest and vaccines are needed the most.

For some, such as African Americans, reluctance to take the vaccine may be related to a well-founded distrust of the medical establishment and government, given past unethical use of Black people in medical research. For others, hesitancy may be related to an overall skepticism about the seriousness of the pandemic. One analysis found that Trump voters were more likely to be reluctant to be vaccinated, despite the fact that former President Donald Trump himself has gotten the jab.

For Catholics, while there may be some conflation with those issues, the main stumbling block is the abortion connection, which has been hyped up by some Catholic commentators. This surely qualifies as willful ignorance at this point. 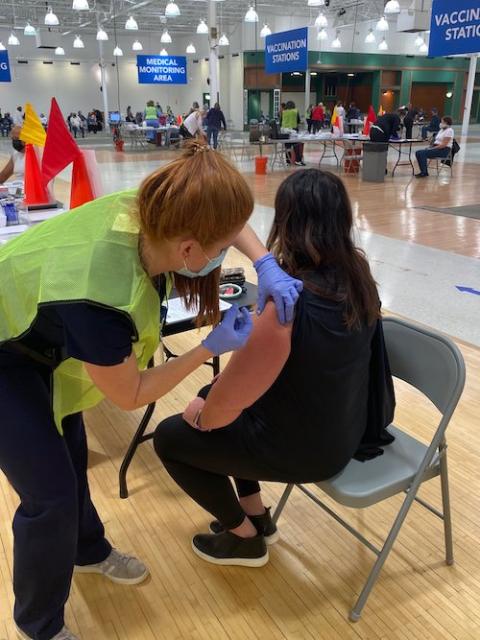 Sarah Smith, an osteopathic doctor at Genesis Family Medicine, vaccinates Tracy Diaz of Davenport, Iowa, March 23, 2021, at the Genesis Vaccination Clinic, which opened that day in a former Dick's Sporting Goods store in Davenport. Over 4,000 doses of the COVID-19 vaccine were delivered the first week of the clinic was open. (CNS/Courtesy of Genesis Health System via The Catholic Messenger)

During a deadly pandemic, public health must be prioritized. whole is akin to the idea of the common good, something Catholics should be familiar with.

I don't believe in mandated vaccinations, but if people choose not to be vaccinated, they will have to accept consequences. The U.S. and other countries are perfectly within their rights — in fact, it is their responsibility — to limit the activities of unvaccinated people, as many schools and workplaces are already moving toward.

This has caused some to cry "government overreach" to so-called "vaccine passports" or "COVID databases." In New Jersey, a parish attempting to protect its yet-unvaccinated pastor from penitents in the closed confessional resulted in such a bombardment of angry calls and emails that the parish was forced to change its policy.

But some more reasonable voices are breaking through. In a recent New York Times commentary, Leah Libresco Sargeant argued that fellow pro-life Catholics should get the vaccine, taking the time to explain the difference between formal cooperation with evil (directly willing it) and material cooperation (not willing the evil, but providing some form of support for it).

After I got my second shot last weekend, I had a full 24 hours of flu-like side effects that relegated me to my bed for a day. It was not fun, but I don't for one second regret getting the vaccine. Not only will it help me and my immediate family, but it is an opportunity to help protect the health of others and promote the common good. Like that little girl in China 11 years ago, I'll take my shot to help all Americans to be healthier.

A version of this story appeared in the April 30-May 13, 2021 print issue under the headline: Why Catholics should get vaccinated.