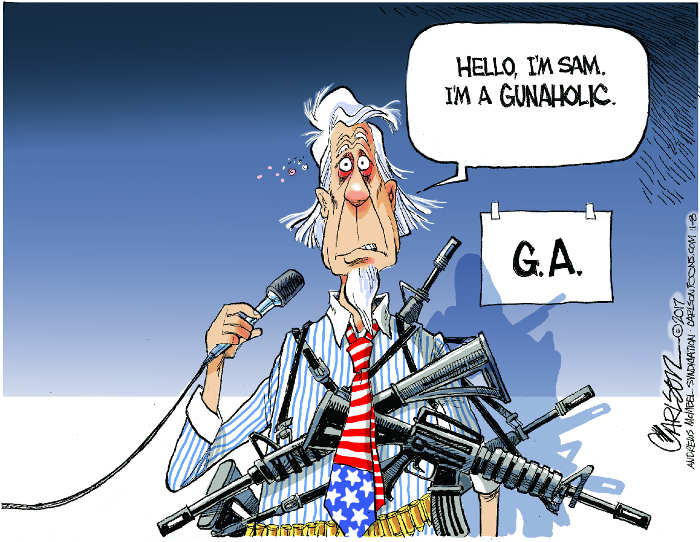 See the item below, "What Explains U.S. Mass Shootings?"

The U.S. bishops are meeting this week in Baltimore, their annual fall meeting. NCR's Heidi Schlumpf and Michael Sean Winters are there looking for the news. (Read all our coverage at USCCB Fall 2017.) Some of the reports:

The Trump administration is hiring a small army of attorneys to fight landowners so the government can seize the property needed to build the wall on the U.S.-Mexico border that President Donald Trump promised his supporters.

Tax cuts for businesses, except the clean ones: GOP tax plan picks winners and losers in energy sector

What Explains U.S. Mass Shootings? The only variable that can explain the high rate of mass shootings in America is its astronomical number of guns.

Does a California law violate the Constitution by requiring anti-abortion pregnancy centers to inform clients about free or low-cost abortion and contraception services? That's the question the Supreme Court is taking on, in a new case it accepted on Monday

Figure this one out: ??? Ohio's prisons agency will give a condemned inmate a wedge-shaped pillow to help him breathe during his execution this week. The Department of Rehabilitation and Correction plans to provide the pillow for death row prisoner Alva Campbell on Wednesday because of breathing issues he could experience while lying flat.

About that Senate race in Alabama: Roy Moore allegations prompt reflections on fundamentalist culture in which some Christian men date teens

Kayla Moore, wife of Alabama Senate candidate Roy Moore, shared a letter on Facebook over the weekend indicating support from more than 50 Alabama pastors. Two ask for their names to be removed. It appears to be a recycled letter from before the GOP primary.