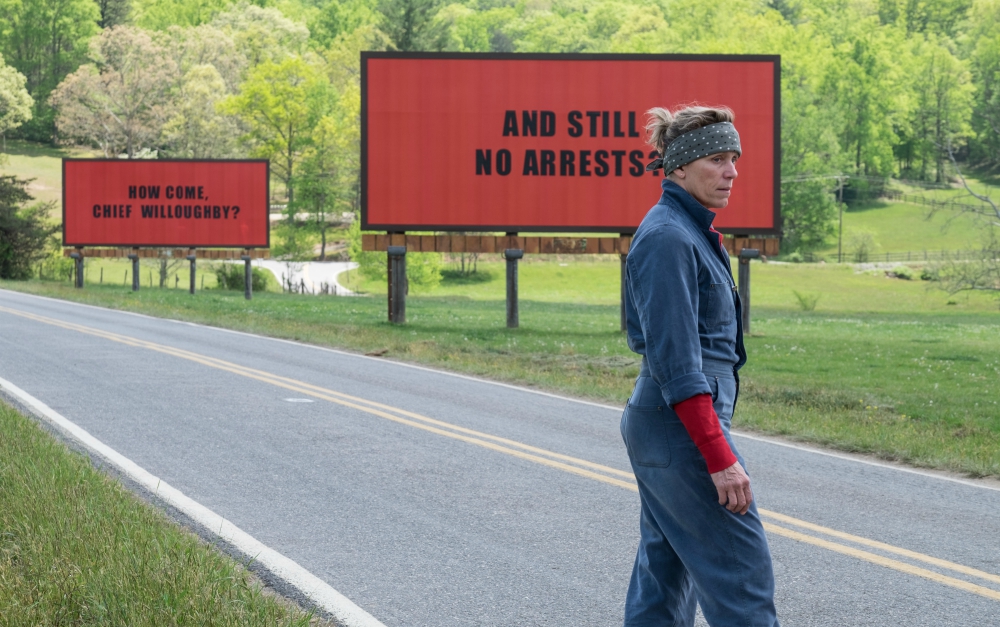 "Three Billboards Outside Ebbing, Missouri" is a powerful parable of violence with the heart of a monster movie. The monster takes particularly American shapes in the evils of rape, racism and police brutality. This unseen monster slowly stalks and takes hostage a small town.

The protagonist is Mildred Hayes (Frances McDormand), whose teenage daughter was brutally murdered. After several months, police have made no arrests, a fact that Mildred points out through the eponymous billboards.

Mildred's cynical one-liners and her quick-witted exchanges with police, her abusive ex-husband, a priest and a malicious dentist bring levity to weighty subjects. Planted firmly on the dark end of the emotional spectrum, the plot and characters cycle through the emotions brought about by divorce, disease, depression, despair and violence.

Mildred experiences catharsis without any true measure of healing. Despite her anger and cruelty to others, we find ourselves on her side. She's real, funny, relatable, and invites empathy. She shows sophistication and wisdom, but she never releases her death grip on anger, except for brief moment while talking to her stuffed animal slippers.

For the Catholic cinematic exegete, "Three Billboards" is an anti-Advent tale. Mildred is in a long winter solstice holding little hope for light and unflinchingly marches toward retaliation. There is a subtle tip of the Catholic hat in an early scene when a character is reading A Good Man Is Hard to Find by Flannery O'Connor, an American Catholic writer and master of the Southern Gothic story.

Like O'Connor, "Three Billboards" charges into the darkest corners of humanity. The lone prophetic voice in the wilderness comes from Penelope, the 19-year-old girlfriend of Mildred's ex-husband. Penelope states, "Anger only begets more anger."

The girl is mocked by Mildred, who replies, "Penelope said 'begets'?"

McDormand's performance is marvelous. Expect an Oscar nomination. Her timing is perfect as she masterfully walks the sardonic tightrope to wring out humor from pathos.

After a brilliant first act, however, the sugarcoated brutality wears thin, and the film descends into caricature. There is a single bright moment of kindness and forgiveness in a hospital scene involving orange juice. The hospital scene is a momentary oasis in an otherwise blighted and bulldozed landscape. The characters endlessly scapegoat each other and can't find a way out of the reprisal spiral.

Like many biblical parables, "Three Billboards" doesn't have a tidy or resolved conclusion. After a while, the credits just start to roll. While Mildred's anger is justifiable and her commitment to finding her daughter's killer is laudable, Mildred doesn't turn a corner to peace and healing. We're left hoping that she might.