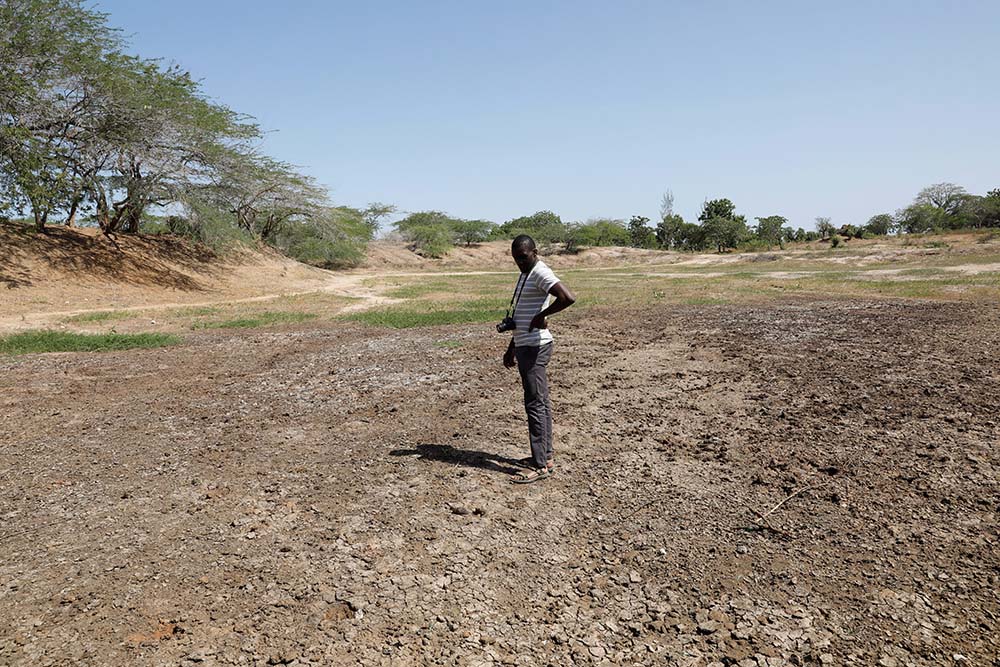 Scientist Chris Shitote examines a dry water hole in Kilifi, Kenya, Feb. 16. In recent years, nations have been quick to make pledges to confront climate change. Pledges, alas, need to be implemented and that has proven more difficult. (CNS/Reuters/Baz Ratner)

There is no punishment sufficiently severe for the so-called "progressive" Democrats who sent a letter to President Joe Biden urging negotiations with Russia to end the war in Ukraine. They have since withdrawn the letter, but the damage has been done, especially to Rep. Tim Ryan, who is running for Senate in Ohio against venture capitalist J.D. "I don't really care what happens in Ukraine" Vance. Making sure ethnic Polish, Ukrainian and other Eastern European voters in Ohio know that it is the GOP, not the Democrats, that admires Vladimir Putin was one of Ryan's calling cards. The letter muddied the waters. The signatories said it was drafted months ago, so perhaps it was not as stupid strategically then as it is now. Its moral stupidity is no different with the passing of time.

In recent years, nations have been quick to make pledges to confront climate change. Pledges, alas, need to be implemented and that has proven more difficult. A new report from the United Nations finds that "just 26 of 193 countries that agreed last year to step up their climate actions have followed through with more ambitious plans," according to The New York Times. Here in the U.S., you can bet a Republican-controlled Congress next year will try and roll back the climate change funding approved in both the infrastructure and inflation reduction packages passed this year. The consequence? "A future marked by more intense flooding, wildfires, drought, heat waves and species extinction."

Also at the Times, reporters Michael Keller and David Kirkpatrick do a deep dive into those districts where white voters have become increasingly radicalized by Trump and his acolytes, and what made them susceptible to these radical ideas. On the one hand, this is what political scientist and author Robert Putnam and others have been saying for years, but it still shows the high price we have paid as a culture for the evils of neoliberalism. I do not believe the people interviewed were born bigots. They were taught it.

At Mother Jones, senior reporter Ari Berman traces the long history of anti-democratic (small 'd') practices and how the state of Wisconsin became a kind of laboratory for these efforts. Berman connects the dots, and how the effort became more and more radicalized.

At Politico, a report on some of the most important candidate debates. It was painful to watch Democratic Lt. Gov. John Fetterman struggle to speak, the ill effects of his stroke so evident, but it was also remarkable that Republican candidate Dr. Mehmet Oz struggled to speak intelligently at times. Politico wraps up some of the key outcomes.