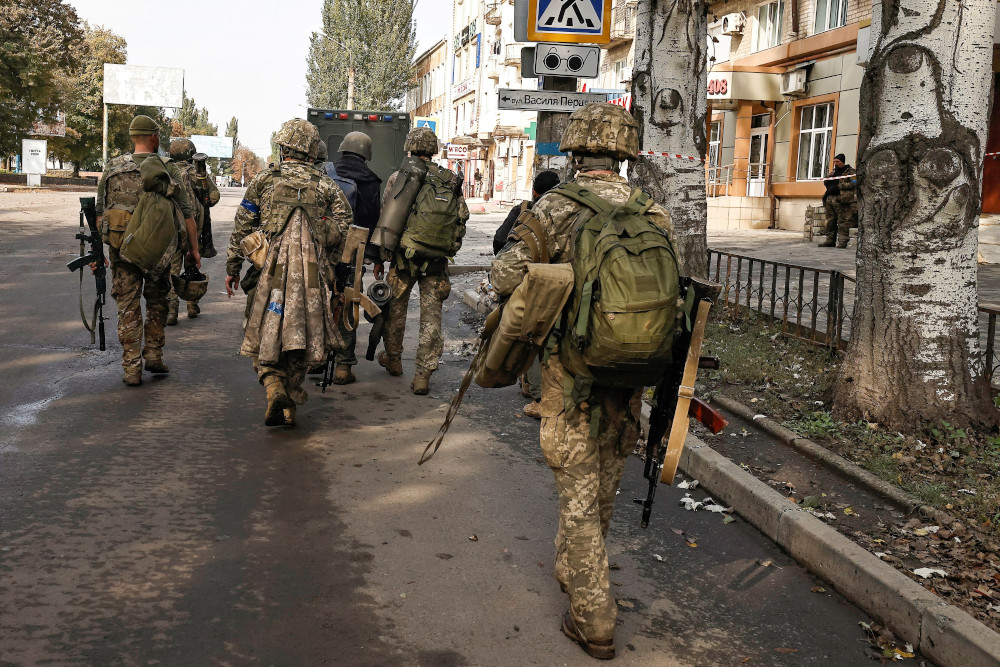 The Washington Post's technology reporters Will Oremus and Christiano Lima analyze the controversy surrounding rapper Kanye West's (now known as "Ye") anti-Semitic social media posts. An Instagram post and tweet were flagged and pulled down immediately for violating social media platform standards. But if Elon Musk and some Republicans have their way, West's vile and violent rant might not have been taken down. I am pretty much a free speech zealot, but social media platforms need to be able to regulate speech that incites violence, especially when it comes from a celebrity.

In The New York Times, Ukrainian journalist Margo Gontar writes about the latest Russian attacks, which are self-evidently meant terrorize the population, not hinder Ukraine's military. After detailing the shock she and others felt this week as bombs again fell in and around Kyiv, Gontar writes, "But then came the rage and, with it, understanding. If Russia needs to resort to the lowest tactics, to terrorism against civilians, to hitting universities, museums, libraries, playgrounds, apartment buildings and infrastructure sites — 11 of them across the country — then Ukraine obviously has the upper hand." Russia is losing this war. A flailing Vladimir Putin is scary, but also hopeful. Now is not the time for the West to lose its nerve. The Ukrainians haven't.

Pro-Putin propaganda on the right is morally offensive but not surprising. To find two so-called liberals, Sen. Bernie Sanders' one-time national press secretary Briahna Joy Grey and The Grayzone's Aaron Mate, doing the same is as surprising as it is morally obscene. Mate sounds like those who defended the Munich agreement in 1938, or Charles Lindberg at an "America First" rally. Democrats need to call this nonsense out and do so loudly before it turns up on Fox News as "typical" of how liberals think.

At Task and Purpose, a website devoted to military matters, an old story that suddenly has contemporary relevance now that Archbishop Timothy Broglio is a candidate for the U.S. bishops' conference president: In 2018, an Air Force chaplain was investigated by the military after blaming the clergy sex abuse scandals on "effeminate" priests during a sermon. The wife of a military officer wrote to Broglio of the military archdiocese, who replied, "There is no question that the crisis of sexual abuse by priests in the USA is directly related to homosexuality." No question? In fact, the John Jay University study the U.S. bishops requested years ago found no such correlation. Broglio's comment reflects bigotry, not science and not morals.

Many currents in academia and the broader culture strike me as fads, but one current, the need to take an holistic approach to problems like climate change, seems vital, and its vitality is evidenced by the way it keeps popping up in different arts and sciences. From ArchDaily, a look at how some contemporary architects are looking back to earlier times — what we once called "primitive" times — and finding that our forbears often undertook a more holistic approach and built structures that were more sustainable and very beautiful. Today's construction industry should follow and take notes.

For lovers of organ music who live near Northeast Connecticut, at 4 p.m. this Saturday, Oct. 15, concert organist Raphael Atila Vogl will perform a concert on the 1836 Denison Smith organ in the Hampton Congregational Church, the oldest playable organ in the state. The instrument was restored in the 1980s and has a lively sound. Every autumn, the church brings a talented young organist to our little town so that we can hear this gem of an instrument played well. You are invited, too.