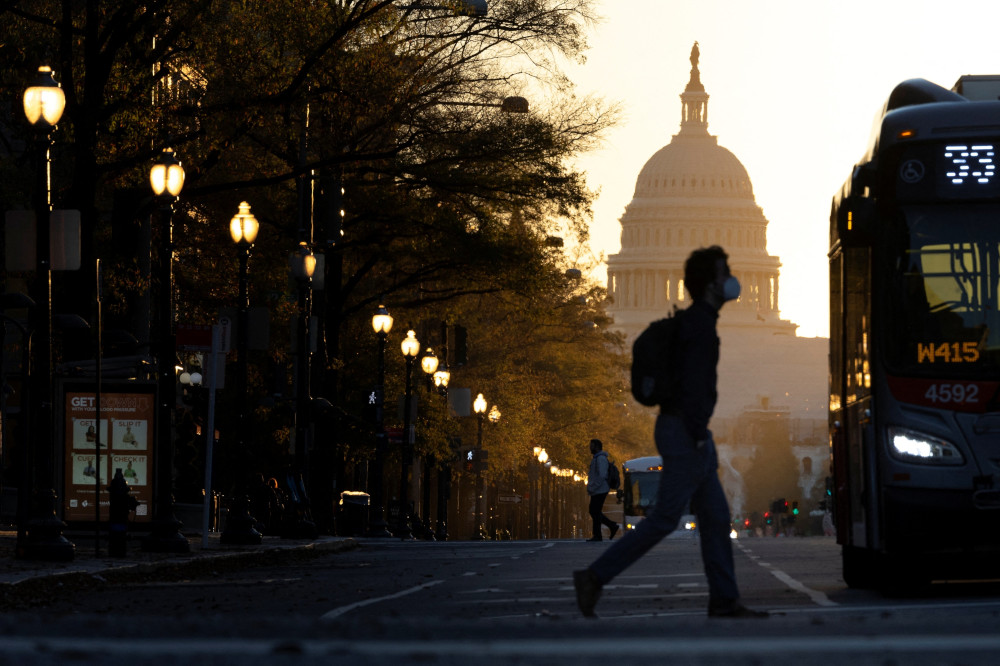 A pedestrian crosses Pennsylvania Avenue as the sun rises over the U.S. Capitol in Washington Nov. 9. (CNS/Reuters/Tom Brenner)

At the Church Life Journal from the McGrath Institute at University of Notre Dame, John Cavadini, Mary Healy and Fr. Thomas Weinandy look at how the papacy has handled the movement for the Tridentine Mass. It is good to see conservative theologians, especially someone like Weinandy who has been a critic of Pope Francis, explain why Francis' actions to restrict the pre-conciliar rite are fully in keeping with the ecclesiological vision of the Second Vatican Council. That said, they get the premise wrong when they say the desire for the traditional rite grew "particularly because of deviations and irregularities perpetrated by some priests" in the post-conciliar era. This diagnosis is facile and it is important to get such diagnoses right. The desire for the Tridentine rite seems motivated by something deeper than disgust with freelancing priests. If I have one criticism of Francis' decisions, it is that he has not really pointed a way to address the deeper desires of those drawn to the old rite, a desire rooted in a more comprehensive dislike for, perhaps even fear of, modernity.

Politico reports on state-level discussions within the Republican Party as they consider why they underperformed in many midterm contests. The centrality of former President Donald Trump in this reckoning is obvious, but is more complicated than the Republican officials interviewed for the story suggested. Trump still has a hold on the imagination of the GOP base and, so far, there is no aspiring presidential candidate who can lay a glove on him when it comes dominating the media. Look for many more of these postmortems in the weeks ahead. A caveat: Those being interviewed always have their own agendas.

Speaking of agendas, The Washington Post reported that some staffers on the House Select Committee investigating the January 6, 2021, assault on the U.S. Capitol are upset with committee co-chair Rep. Liz Cheney because she wants the final report to keep a singular focus on Trump. Without Cheney, those committee hearings would have been a sleeper. The staffers want fodder for future contests. Cheney is right.

Also in The Post, Glenn Kessler, their principal fact-checker, provides a good briefing on the sometimes wild, usually strained, claims Republicans make about Hunter Biden's business dealings and, what is more important, if those dealings were linked to the president. I am no fan of grift, and recognize that Democrats are as guilty of it as Republicans. But there seem to be not much of a fire at the end of the smoke trail here.

In The New Yorker, Stanford University professor Allyson Hobbs has a short, interesting piece about the Lorraine Motel in Memphis, its former owners, Walter and Loree Bailey, and that horrible day in 1968 that catapulted the motel to prominence because it is where the Rev. Dr. Martin Luther King Jr. was shot. It is now the National Civil Rights Museum. Next year will be the 55th anniversary of that dreadful day when King was killed.

At CNN, a report on two professional wrestlers who created the perfect anti-hero for bouts in the former mining cities of Appalachia: the "progressive liberal." When they started the character in 2017, it riled up the crowds, but in 2022, the mood is uglier and at a recent match violence broke out in the audience. There was a time when defining deviancy down was a principal concern of conservatives. Seeing GOP politics through the lens of professional wrestling is a book waiting to be written.