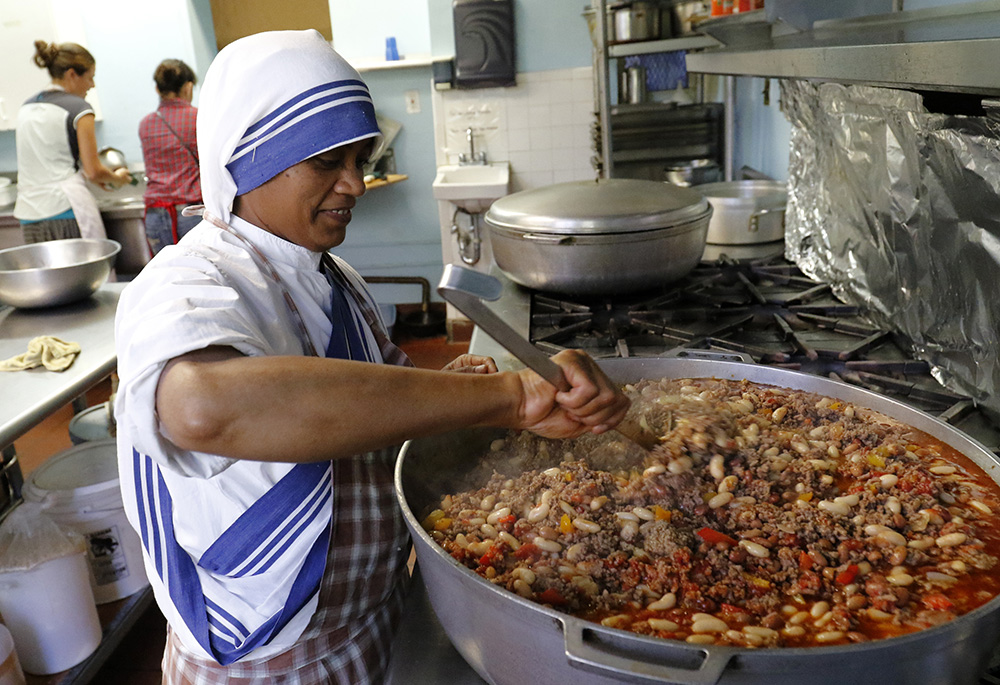 Sr. Marie Frank, a member of the Missionaries of Charity, prepares lunch in a soup kitchen run by her order in an apartment building in the South Bronx section of New York in this 2016 photo. (CNS/Gregory A. Shemitz)

The question this column purports to answer is a clear one: Will religious life rise again? Yes? But is it sensible in this day and age to even think of such a thing? The answer is actually a simple one but a potentially life-changing one at the same time. Several ancient stories long ago illuminated both the purpose and the spirituality of what it means to be a religious. Even now, even here.

The first of those stories is from the tales of the desert monastics.

One day, Abbot Arsenius was asking an old Egyptian man for advice on something.

Someone who saw this said to him: "Abba Arsenius, why is a person like you, who has such great knowledge of Greek and Latin, asking a peasant like this for advice?" And Arsenius replied, "Indeed, I have learned the knowledge of Latin and Greek, yet I have not learned even the alphabet of this peasant."

The Zen masters, too, tell a story about the nature of real religious commitment.

The monk Tetsugen made the goal of his life the printing of the Buddha's sutras onto Japanese woodblocks. It was an enormous and expensive undertaking and just as he collected the last of the funds he needed, the Uji River overflowed and left thousands homeless.

So Tetsugen spent all the money he'd collected on the homeless and began his fundraising again. 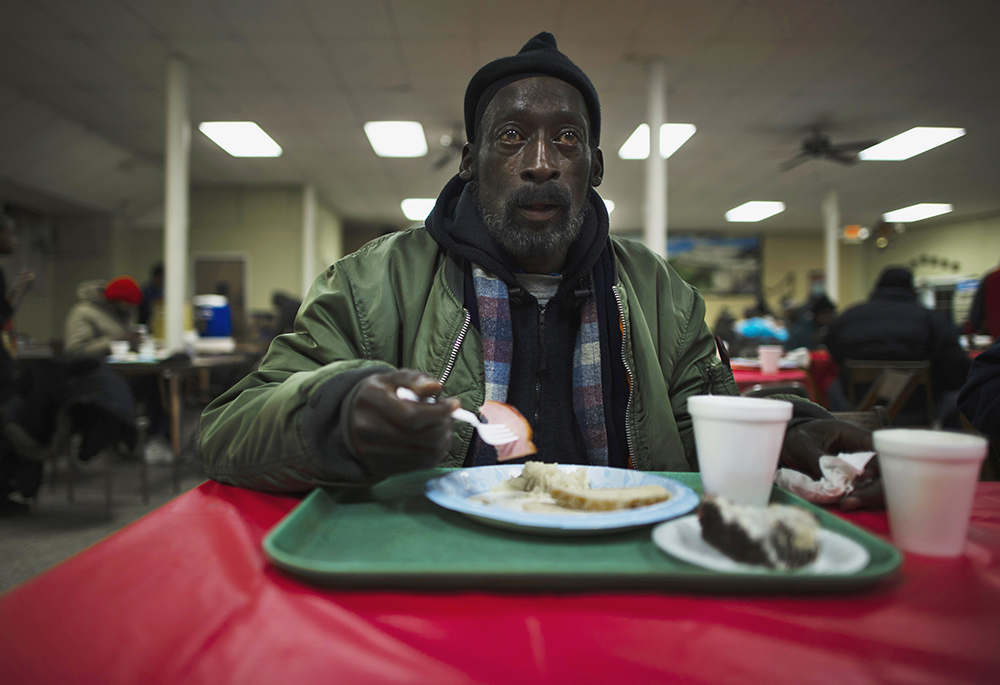 A man eats his lunch at a soup kitchen in the basement of St. Leo Catholic Church in Detroit. (CNS/Reuters/Mark Blinch)

But the very year he managed to raise the money for a second time, an epidemic spread over the country. This time, Tetsugen gave the money away to care for the suffering.

It took 20 more years to raise enough money to print the scriptures in Japanese.

Those printing blocks are still on display in Kyoto. But to this day, we're told, the Japanese tell their children that Tetsugen actually produced three editions of the sutras and that the first two editions — the care of the homeless, and the comfort of the suffering — are invisible but far superior to the third.

Clearly, the Zen masters know what we know: Witness, not theory, is the measure of the spirituality we profess. What we do because of what we say we believe is the real mark of genuine spirituality.

Finally, St. Paul is very clear about our common obligation to be part of the Christian enterprise. "To each one," he teaches in 1 Corinthians, "the manifestation of the Spirit is given for the common good." It is, in other words, given to each of us for the sake of the Christian community.

These personal gifts of ours are not for our private little personal, spiritual deserts alone. Together we are meant to be messengers, models and makers of a whole new world of justice and love wherever we are.

The model of our own ancestors is more than clear about that.

Benedictines were visible in the healing work of hospices when sickness was considered a punishment for sin. They call to us today, then, to be healing figures everywhere.

Religious were visible public witnesses to equality when the enslavement of one people by another was thought to be moral. They continue to call us to make equality a sign of our own communities today.

Religious communities provided holy hospitality and security for pilgrims in religious guesthouses as they traveled from one shrine to another in Europe. They call us to see Christ in everyone who comes through the doors in our cities and the arches of our monasteries. 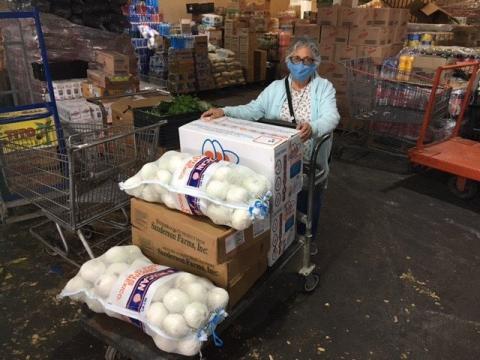 Benedictine Sr. Ursula Herrera, a Benedictine Sister of Boerne, Texas, pictured in an undated photo, buys food to distribute in Piedras Negras, Mexico. She makes regular food and supply runs to a home for special-needs adults and an orphanage on the Mexico side of the U.S.-Mexico border. (CNS/Courtesy of John Bivens)

They were visible in the prophetic works of religious communities who recognized the plight of the working poor by providing food and care to families in earlier periods and by advocating legislation to deliver rather than restrict them now.

The charisms of religious life are alive, in other words. They go on going on — as the memory of Jesus goes on going on in us.

These charisms are not ever complete. They are not frozen in time. They are not fixed and static, stagnant and stock-still. They leap with life. They never die. They are dynamic, unfolding and as necessarily new today as they were in the soul of those religious who went before us.

Separately and alone and together, we must make it visible again in new ways. Together we must make it vocal again in the new language of a new time. Benedictines before us went from boarding schools to job training programs for refugees.

Now centered on the new poor, new centers are as open today to Buddhist and Muslim clients as it was for the German Catholic, Polish, Irish, and Eastern European immigrants for whom it first began. Now they come in saris and burqas and hijabs rather than the uniforms of the age before this one, but their needs and hopes are the same.

That awareness is a cry to the religious of our day to continue to bring basic human values to the center of every system.

Now is not the time to ignore religious life or to speak of it as something from another age. Now is the time to renew it with vigor.

When the emerging mercantile society began to consume the lives of the poor for the sake of a new economic system that robbed the poor of land but paid nothing for their labor, it was a centurieslong cry to all of us to participate in the renewal and support of poverty-stricken societies today.

When the new industrialization herded men into factory jobs but gave women nothing, women religious opened schools for girls so that the seeds of a world without sexism could be planted.

It is the depth of those spiritual traditions, the courage of those spiritual histories, the commitment of both women and men religious who brought us to this day. It is that spirit which we still hold in trust for those who seek to find.

What is important to understand is not that all of us must have direct ministries with the poor. In fact, not all of us can have the same ministry of any kind. It's the skills and interest each sister brings in herself that decides the gift she makes. It will also determine to whom she ministers and how she does it for the common good. 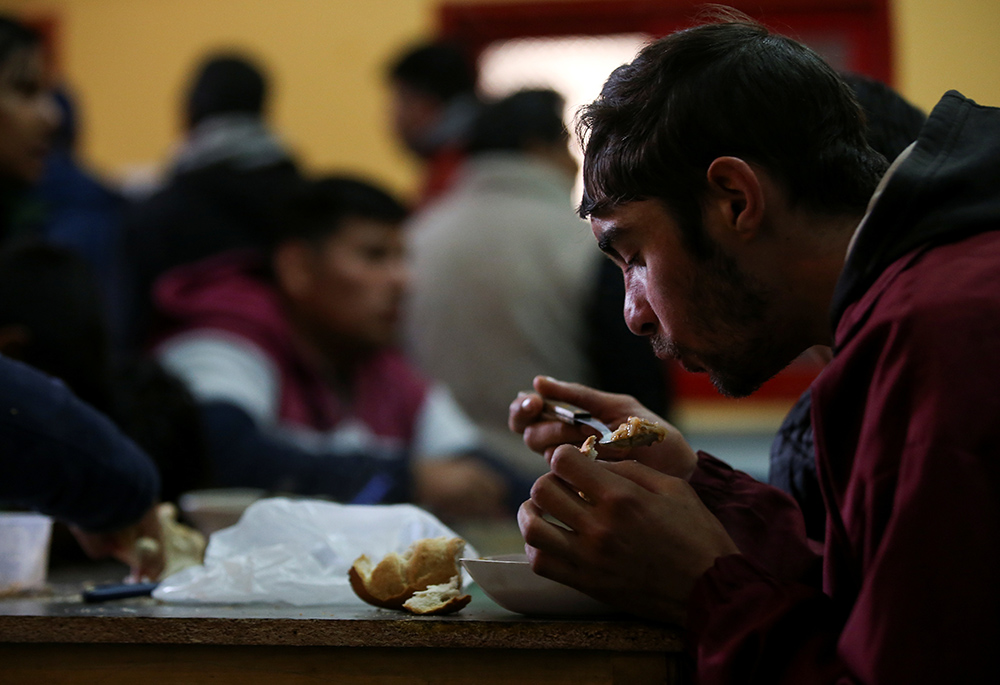 A man eats his lunch at a soup kitchen in the basement of St. Leo Catholic Church in Detroit. (CNS/Reuters/Mark Blinch)

I, for one, would not qualify as a religious if that were the case. I have never volunteered at a group home. I have never worked at a woman's shelter. I have never served a cup of soup at our own soup kitchen. Instead, my ministry simply broadcasts, raises up, even demands, the serving of free soup — not only for my Benedictine sisters who do serve the soup, but for people everywhere who can contribute funds or other support to make that soup available.

The point is that each of us must do something so that God's will and Jesus' love are clear to everyone we meet.

Religious life is lived on a mountaintop of prayer, immersed in the cries of the psalmist, challenged daily by the prophets, touched to the core by the demands of the Gospel and called by Jesus — liberator, redeemer, healer and lover — to "Come follow me!"

It is that call that leaves us with the question, "What do we need religious for today? Who are we struggling to liberate from the chains of rejection, poverty and greed?"

Now is not the time to ignore religious life or to speak of it as something from another age. Now is the time to renew it with vigor.

From where I stand, the Scripture is very, very clear:

"As you go, proclaim this message: 'The kingdom of heaven has come near.' Heal the sick, raise the dead, cleanse those who have leprosy, drive out demons. Freely you have received; freely give" (Matthew 10:7-8).

Give what? Give our lives, our hearts, our personal consideration of religious life again. In this century. Now.