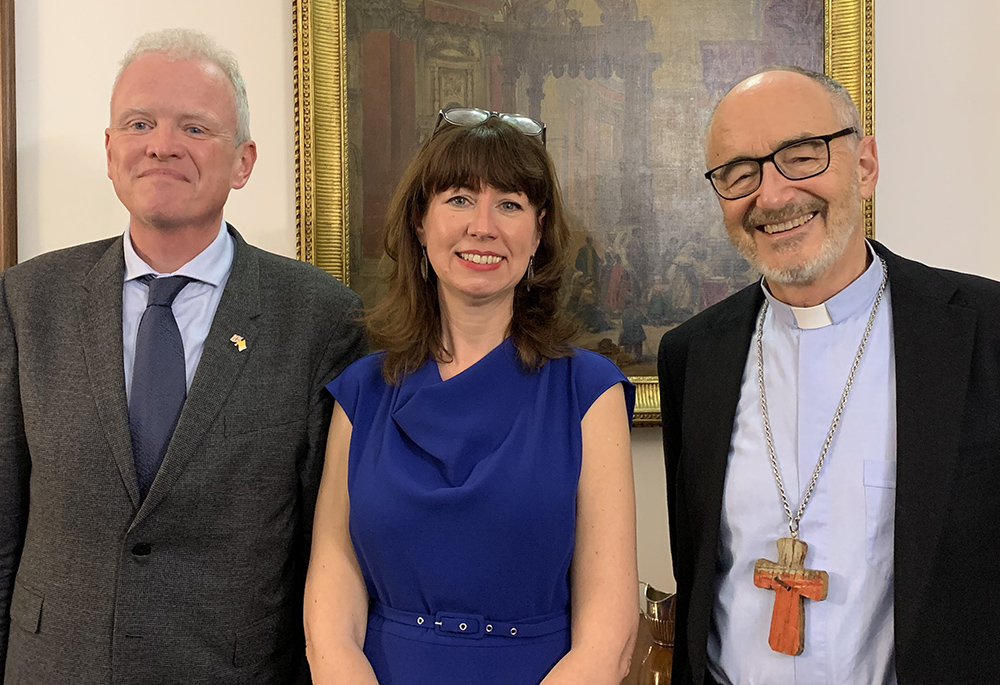 Chris Trott, British ambassador to the Holy See; Anna Rowlands, a professor and author; and Canadian Cardinal Michael Czerny, interim president of the Dicastery for Promoting Integral Human Development, pose March 7, at Trott’s residence in Rome after a discussion of Rowland's book, Towards a Politics of Communion. (CNS/Cindy Wooden)

Still, the phenomenon of Catholics not knowing our social teaching is not unique to the United States and so we have to look for additional explanations. One of the principal reasons is that in academic circles, Catholic social teaching generally falls in the category of ethics, and ethicists tend to dig deeper into their subject matter, gravitate towards new subject matter, indulge in hyper-balkanization, and neglect the foundational need to locate their subject matter within the panorama of Catholic theology and in the sweep of history. Catholic social teaching then is not generally known among average Catholics in part because it becomes overly specialized. And because each generation faces a new set of ethical conundrums, and nothing motivates most scholars today so much as a fascination with anything that new, the pattern continues.

In her new book, Towards a Politics of Communion: Catholic Social Teaching in Dark Times, Durham University professor Anna Rowlands does many things, but one of the most important is that she situates Catholic social teaching, constantly relating it to ecclesiology, to scriptural studies, to soteriology and to eschatology, as well as to ethics. She brings it into dialogue with diverse thinkers, from Jacques Maritain to the Communio school and Joseph Ratzinger. This book does much else, as we shall see, but it is the fact Rowlands provides a road map for the reader — and for the serious Catholic — that really sets this book apart from so much academic writing. 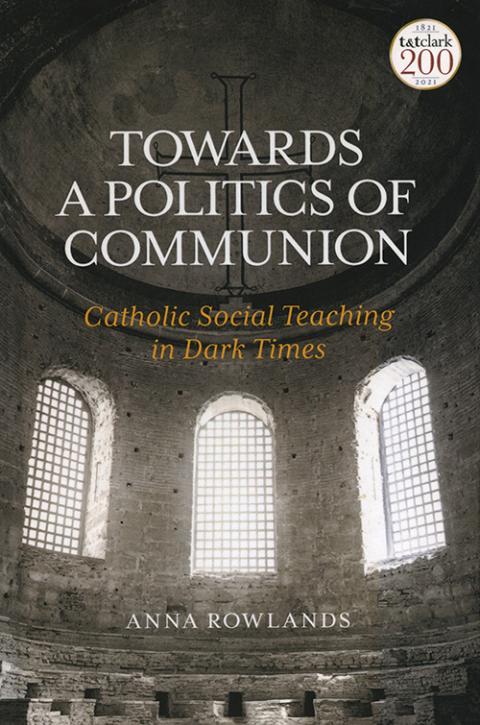 This is the cover of Anna Rowland’s book, Towards a Politics of Communion. Rowlands writes about how Catholic social teaching is not just about promoting social justice, but about living as Christians in the world. (CNS/Courtesy of T&T Clark)

Thus, she opens with a brief consideration of three encyclical letters Pope Pius XI promulgated in 1937, all within the span of a few weeks: Mit Brennender Sorge, Divini Redemptoris and Nos Es Muy Conocida. The first condemned Nazi ideas about race, the second condemned atheistic communism and the third condemned the persecution of the church in Mexico.

In one sense, these encyclicals with their condemnations look back to the anti-modernism of Pius IX and Pius X, but Rowlands points out that the three letters "illustrate something important and not always well understood about the core of the post-1891 Catholic social tradition. … CST in its modern form is as much a tarrying with the ideas that constitute modernity as with its concrete practices." Catholic social teaching, as seen in these letters, "functions as a social philosophy that never fully baptizes a liberal philosophy or settlement. It remains locked in a complex dialogue — and often a drama of recognition and misrecognition — with liberal modernity."

Rowlands then explains more about this estuary where Catholic social teaching and liberal modernity intersect. "In this light, the political theological questions posed by the popes to a secular audience," she writes, "might be simplified and articulated in the following ways: Who or what do you think will save you, and what do you want to be saved from and for? What are your sources of authority and legitimacy and who, or what, grounds or guarantees them? What kind of freedom results and for whom? Who is your 'Other' and what work do they (are they made to) perform in your social vision?"

I confess that I have been studying Catholic social teaching since I first encountered it in college in the early 1980s, and I have never found questions that so well summed up the teaching, and so well related it to other theological questions as in those four questions.

But Rowlands is not done surveying the estuary. "The Church, as we have noted, is rightly attentive to the ways that the political tends to be theological in its own way: through the co-option of religious language and symbols as tools of power or through its own value system of ultimate claims that ought to be duly socially scrutinized," Rowlands observes. "Whilst we may talk rightly about the separation of Church from state, it is simply evident that we cannot divide the political from the theological in any final or absolute way."

That insight is not only keen, and precise, and all the other things you want from a smart theologian; it is, like so much in this book, very well said.

If Rowlands is especially adept at situating Catholic social teaching in its historical and political context, she is equally skilled at highlighting the internal themes that run through the papal encyclicals that ground the teaching. The encyclicals between Vatican I and Vatican II "tend to lament the growth of industrial, technocratic and transactional forms of social organization." The "second discernible and recurrent social theme engaged by the popes concerns the changing nature of the state itself." And, the "constantly shifting relation of labour to capital and the dignity of work" is a third social theme she identifies. These themes could have been identified by any one of a number of theologians.

What distinguishes Rowlands is that she then turns to the underlying ecclesiological issues at stake in these themes that are, ostensibly, about civil society. She writes:

The Church of this period was wrestling with the implications of residing in a liberal political system that did not easily accept the Church's claim to be a public body. In the patristic language of a societas perfecta, the Church found its call to be a perfected society, a language that did not posit the Church as a simple power rival to the liberal secular polity. In the Augustinian formulation, the social realm, including the Church as a society, had a more ensuring status than the political. … According to patristic formulation, the body of Christ was itself a society, a social body and an expert in social questions.

In the U.S., where the Catholic Church was busy assimilating itself to a dominant Protestant culture, in which the privatization of religion was taken for granted, this social orientation of Catholic self-understanding has never been strong enough to challenge the individualism of the ambient culture. Citing the work of John Neville Figgis, a thinker in the Anglican pluralist movement of the early 20th century, Rowlands notes, "For Figgis the Church thus remained an indigestible entity, unable to accept a prescription of itself as a body of private belief but also unable to clearly account for itself as a social actor in the terms offered by liberalism."

Rowlands details the "gradual shift towards papal integration of modern rights language into the heart of natural law reasoning." This recourse to natural law is a near-constant in the tradition, with the later emergence of the idea of integral human development in the magisterium of Pope Paul VI, an idea now being fleshed out further by Pope Francis. In the wake of Vatican II, however, with its profound turn to Christocentric theology, natural law becomes integrated with scriptural and patristic themes and approaches.

All of these insights, and that is just the first chapter! I will conclude this review on Wednesday, Nov. 30, looking at the themes of human dignity, the common good and the body politic.