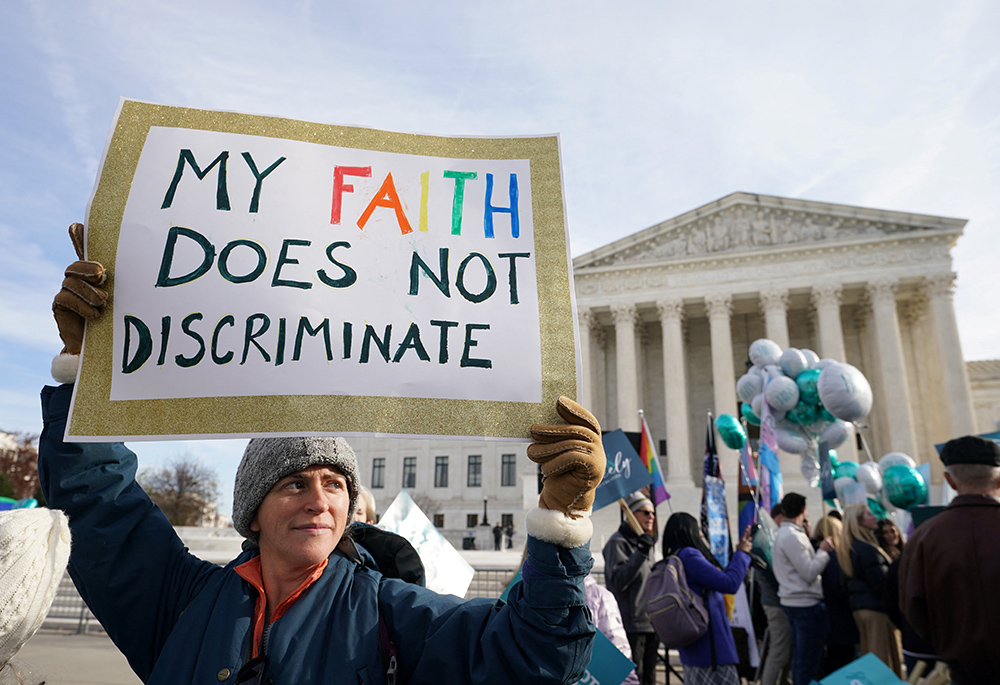 A protester displays a sign during a demonstration outside the U.S. Supreme Court Dec. 5 in Washington, as justices hear arguments in the case of a Colorado website designer who refuses to create websites for same-sex marriages due to her Christian beliefs about traditional marriage. The plaintiff, Lorie Smith, says her First Amendment right to free speech exempts her from a state law that forbids businesses from discriminating based on sexual orientation. (CNS/Reuters/Kevin Lamarque)

The cultural struggle between same-sex marriage and religious liberty took center stage this week in all three branches of government. On Monday (Dec. 5), the U.S. Supreme Court heard oral arguments in the case of a web designer, who is an evangelical Christian and refuses to produce websites for same-sex marriage ceremonies. And, at a time yet to be determined, Congress is expected to send President Joe Biden the Respect for Marriage Act, which grants statutory protection to same-sex marriage should a future court decision ever reverse its decision in Obergefell v. Hodges that established a constitutional right to marriage for same-sex couples.

The two cases raise legal, political, cultural and moral issues, as well as plenty of posturing by the activist lawyers on all sides.

It is unsurprising that the high court appeared to be leaning towards the web designer, Lorie Smith, as her claim touched on two rights explicitly mentioned in the First Amendment, religion and speech. Colorado's anti-discrimination law seemingly compels her to serve all client requests, but she claims her opposition to same-sex marriage, a sincerely held religious belief, should allow her to decline to do same-sex marriage websites, and that it would also compel speech on her part. Smith notes that she is happy to serve LGBTQ clientele for other jobs, just not for same-sex marriage ceremonies. It is a significant distinction legally, but not morally.

The moral issue at stake is whether or not Smith is being compelled to cooperate with evil in a way that is excessive, and I do not see it. No one is forcing her to sanction the ceremony. No one was seeking her approval before the vows are made. She is not complicit in anything.

Legally, the court already held in Masterpiece Cakeshop v. Colorado Civil Rights Commission that individual religious believers enjoy significant protection of their religious liberty when they enter the marketplace, more than I would have granted to be sure, but I am not allergic to the idea that religious liberty protections should be made more robust at a time when many wish to diminish them.

The issue of compelled speech seems to me to be the stronger argument in this case. I would not want a liberal web designer to be forced to devise a website for a neo-Nazi like Donald Trump's dinner date Nick Fuentes, even while Fuentes' speech is constitutionally protected and should be. The argument from the liberal justices that the speech in question was not Smith's but the couple's struck me as exceedingly weak.

The Respect for Marriage Act, which has bipartisan protections for religious liberty, did a fine job balancing the divergent interests, assuring religious institutions that they need not fear their privileged constitutional status if they cling to traditional practices surrounding marriage, while also making sure same-sex couples can rest easy that their marital rights must be respected when they cross state lines.

The argument from the U.S. bishops' conference that the religious liberty protections are insufficient is a weak one. As my colleague Bran Fraga reported Monday, Dec. 5, the Mormons, the Orthodox rabbis, and the National Association of Evangelicals were all satisfied, but the bishops weren't. The bishops wanted individuals protected in the law, as well as religious institutions. So long as the issue is same-sex marriage, the bishops are unreasonable in their legal analysis.

Worse, the bishops are taking liberties with our Catholic teaching. The church has never taught that an individual has an absolute right to refuse to comply with generally applicable laws on account of a sincerely held belief. We went through this two years ago with the COVID-19 vaccines. The First Amendment may grant more sweeping protections to individuals, but in Catholic teaching, rights exist within a political community in which the common good makes demands as well. Individual rights coexist with communal relations and responsibilities. There is no libertarianism a Catholic can endorse on Catholic grounds.

Nor has the Catholic Church in this country ever demanded that civil law reflect our sacramental understanding of marriage. We do not propose to deny rights to divorced and remarried Protestants. We have never supported civil penalties for divorced and remarried Catholics. Why do we have to view same-sex marriage differently?

Just because an expansive understanding of religious liberty permits churches and believers wide latitude in their conduct, that doesn't mean we Catholics should not hold ourselves to a higher standard. It would do the bishops' conference a world of good if they joined with the Catholic Health Association to announce their determination that under no circumstance would our Catholic hospitals fail to treat members of a LGBTQ family the way they treat other families when it comes to something as intensely connected to human dignity as the right to be with a family member in the hospital. A little proactive humanity goes a long way.

Just because an expansive understanding of religious liberty permits churches and believers wide latitude in their conduct, that doesn't mean we Catholics should not hold ourselves to a higher standard.

As a political matter, what the bishops and other conservative Christians need to recognize is that they have a better chance of preserving the religious freedom of their institutions if they do not continue to demand this "heads I win; tails you lose" approach to same-sex marriage. The Mormons and other conservative believers built a relationship with LGBTQ rights' groups, heard their concerns, found a workable compromise and de-escalated the conflict. I suspect those same LGBTQ rights groups will be less likely to challenge them in the future, but they will see in the Catholic Church a tempting target for litigation.

What both the Supreme Court case and the bill making its way to President Joe Biden's desk show is the degree to which same-sex marriage is still a contested battlefield in the culture wars. In The Washington Post, columnist David Von Drehle argues that the GOP's current problems date back to the candidacy of Pat Buchanan in 1992, followed by the speakership of Newt Gingrich. There is much to Von Drehle's thesis. He notes that in the five elections between 1972 and 1988, the GOP captured 2,200 electoral college votes to the Democrats' 487. Then it all changed and the GOP has only won a majority of the popular vote once, in 2004, since 1992.

Why, then, are some religious believers still willing to fight and die on a hill that is in the rearview mirror for most Americans? Same-sex marriage, like abortion, has assumed a totemic status in our culture. Some people see evidence of cultural decline — which is always evident, because cultures are always declining and growing at the same time — and they locate the start of the decline that worries them with the sexual revolution. It is not an insane view. Others view the rise of nativist populism as evidence of cultural decline.

What is more, sexual morality really is a large part of Christian ethics and always has been. An obsession with sexual purity as an indicator of religious fidelity is also often a hallmark of heretics, from the Gnostics to the Jansenists. These things are complicated.

Cui bono? This is the question that should always be asked first in culture war fights. In both these cases, the people who benefit are the professional culture warriors. Whether they work at the Becket Fund or at the Human Rights Campaign, lawyers look for clients to bring cases, and bills to be introduced, that will advance their cause, no matter how unnecessary. The concern about the future of same-sex marriage because of an off-hand remark in Justice Clarence Thomas' concurring opinion in the Dobbs v. Jackson Women's Health Organization decision overlooks two large facts: No other justice signed Thomas' opinion and Justice Neil Gorsuch is friendly to LGBTQ concerns, as seen in his vote on a major workplace discrimination suit. Meanwhile, both sides in the culture wars continue to raise money by whipping up controversy.

There is a deeper lesson here. Looking to politics to resolve cultural disputes comes with a cost, not least because you end up investing the political order with more power than that with which a liberal should feel comfortable. The Bill of Rights stands athwart any effort by the government to encroach too much on personal liberties, even when the encroachment is the result of a pursuit of justice. Opposition to same-sex marriage has been evaporating. Among some conservative Christians, that evaporation is very slow, but I think it is inevitable. We shouldn't be willing to toss the First Amendment overboard to accelerate it.