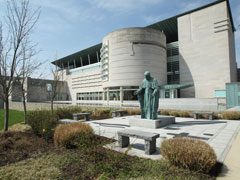 The Knights of Columbus announced Aug. 2 that it will open a shrine in Washington dedicated to Blessed John Paul II at the current location of the Pope John Paul II Cultural Center, seen here in an April photo. (CNS/Nancy Wiechec)

The beleaguered Pope John Paul II Center in Washington, a $75 million monument to the legacy of the late pope that has been financially strapped since its opening in March 2001, will be sold for $22.7 million to the Knights of Columbus. The organization said it will transform the center into a shrine to John Paul.

The sale brings sighs of relief to the Detroit archdiocese, which has loaned the center more than $54 million under an arrangement worked out by former archbishop Cardinal Adam J. Maida, the driving force behind establishment of the facility. The archdiocese will be left with a loss of at least $34 million when the sale is finalized.

Maida first approached John Paul with his idea for the center while bishop of Green Bay, Wis., where he served from 1984 until 1990, the year he was appointed to head the Detroit archdiocese. He retired as archbishop in 2009.

The center never caught on as the tourist attraction and Catholic think tank it was intended to be, and within five years of its opening the structure was $36 million in debt to the Detroit archdiocese because of loans that Maida had made or guaranteed to cover costs of operations at the center.

That amount has risen to more than $54 million today, a portion of which includes an average $65,000-a-month tab for upkeep that the archdiocese continued to pay as it marketed the center for sale during the past 18 months. The archdiocese will receive about $20 million from the sale, but about $18 million of that will go toward settling the remainder of a $23 million loan from the Allied Irish Bank. That amount is included in the $54 million loaned to the center. About $2.7 million from the sale will go to The Catholic University of America, which has a secured interest on the land.

The Knights of Columbus announced Aug. 3 its intent to establish the shrine to John Paul at the former center, which will also contain exhibits “on the life and legacy of Blessed John Paul II, and an exhibit on the Catholic heritage of North America.”

“True to Pope John Paul II’s vision, and using the story of his life as an inspiration, the shrine will be an opportunity to evangelize and spread the good news of the Gospel through a new evangelization,” said Supreme Knight Carl Anderson. “Because of his tireless evangelization efforts, an entire generation of Catholics has become known as the ‘John Paul Generation,’ and certainly we are honored to continue to spread his profound and powerful message of hope for our country, our continent and our world.”

“The Knights of Columbus will bring a new vibrancy to the building,” he added. “The shrine and focus on the new evangelization fits perfectly with the original intent of the building and mission of the cultural foundation.”

A letter on the Detroit archdiocese’s Web site from the current archbishop, Allen H. Vigneron, says, “The sale should be finalized within the next 60 days.”

From the very outset of the John Paul II Center project, questions were raised about the viability of what was envisioned as a kind of presidential library, but for a pope. The 100,000 square-foot center, located on 12 acres next to Catholic University, is in an out-of-the way location and not convenient to public transportation. It planned to recoup costs by charging admission to exhibits in a city with a wealth of world-class museums and other attractions that are free and within easy access of public transportation.

Beyond a questionable business model, concerns were raised about the use of funds from an archdiocese that included one of the poorest cities in America to finance the operations of a losing tourist attraction and research center more than 500 miles away.

Maida made the loans without consultation with priests or laity in the archdiocese. Catholics in Detroit were informed about the degree to which the archdiocese was committed to the project in a letter from Maida only after NCR reported on the debt in a February 2006 story.

At the time, archdiocesan spokesman Ned McGrath said the archdiocese would not discuss its investments. Fielding questions about the recent sale, he referred a reporter to the diocesan Web site, which contains an extended question-and-answer presentation on the issue.

Vigneron, who took over in Detroit in 2009, immediately appointed a commission to review the financial status of the archdiocese. Significant reforms have followed, including reorganization of diocesan financial operations and a financial council. The latter, according to a Web site posting in April, “is a nine-member committee comprised of lay leaders and clergy that provides oversight and advice to Archbishop Vigneron on all financial matters pertaining to the Detroit archdiocese.”

According to the statement, the “level of engagement of the Finance Council has increased significantly, and it is working in close collaboration with the archbishop, the moderator of the curia and the college of consultors to provide greater oversight and guidance.”

Certain church laws stipulate that a bishop should seek approval from the diocesan financial committee and from diocesan boards of consultors before engaging in unusual financial undertakings or a financial venture that might be harmful to the diocese.

However, one commentary on canon law states that the statutes are intentionally vague because of significant differences in what might constitute ordinary and extraordinary financial undertakings from diocese to diocese.

According to the statement on the archdiocesan Web site, the reforms enacted by Vigneron regarding finances “exceed standards required by canon law statutes and the U.S. Conference of Catholic Bishops,” including “consultative consent on some financial issues.”

The Knights of Columbus, an international Catholic service society, has a membership of 1.8 million, mostly in the United States. Headquartered in Connecticut, the organization will now have a Washington base. The Knights’ press release did not specify whether the organization plans to charge admission or provide details on how it would fund ongoing operating costs at the new shrine.

The Knights spokesman told NCR that there are plans for the exhibit and the shrine, and how “this will all come together and those plans will be released in the near future.”

The Dominican Sisters of Mary, based in Ann Arbor, Mich., signed a purchase agreement in 2010 with the Detroit archdiocese and had plans to turn the cultural center into a house of studies, but backed out of the sale in February because of a lack of funding.

[Tom Roberts is NCR editor at large. His e-mail address is troberts@ncronline.org. Jerry Filteau contributed to this story.]