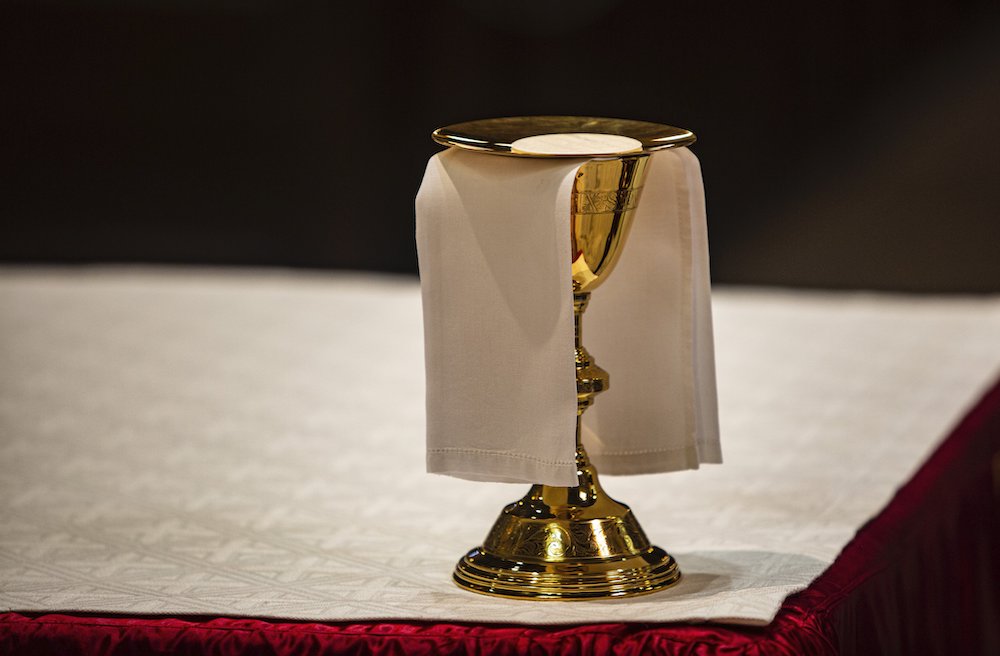 The Eucharist rests upon a paten on an altar in a cathedral. (CNS/Chaz Muth)

"We object to any use of the Eucharist as a political weapon whether manifest or camouflaged," said Fr. Gregory Barras, chair of the leadership team of the Association of U.S. Catholic Priests, or AUSCP, in a June 9 statement on behalf of the priests' group. The Association of U.S. Catholic Priests is the largest organization of American Catholic priests. Its membership tends to be older and more liberal priests. (Full disclosure: I am a member of the leadership team of the AUSCP, though I was not involved in the issuance of this statement.)

Barras was reacting to a letter signed by more than 60 U.S. bishops and sent on the letterhead of my own archbishop, Cardinal Wilton Gregory of Washington. The letter, addressed to Archbishop José Gomez of Los Angeles, chairman of the U.S. bishops' conference, asked the conference to postpone the discussion of "eucharistic worthiness" until such time as the bishops can meet in person. (The upcoming June 16-18 meeting is virtual.) The discussion promises to be a fight.

What is at stake? Cloaked in theological and legal language, this is an explosive political issue for the church. It is the question of whether Catholic politicians who take public policy positions contrary to the moral teaching of the church should be denied the Eucharist. In actual fact, this fight is chiefly, if not exclusively, about abortion.

Over the past 20 years, politically right-wing bishops have elevated abortion to the "preeminent" moral and political issue for Catholic voters. They are leading the fight to draft a position paper that will almost certainly recommend that bishops bar Catholic politicians, like President Joseph Biden, from receiving Communion. If Gomez and his supporters get their way, the completed resolution would be presented to the November 2021 meeting of the bishops. It would be just in time for the midterm congressional elections in 2022. Coincidence? I think not.

The operative word in the AUSCP statement is "camouflaged." Camouflaged by wrangling about bureaucratic procedures and theological language, this is a highly political move by the conservatives in the bishops' conference. They want to support their political allies (chiefly Republicans) by denying Holy Communion to Catholic politicians (chiefly Democrats).

Gomez has already tipped his hand on the political issue when he congratulated Joe Biden on his inauguration last January. In a largely even-handed letter, Gomez claimed to want to work with the new Catholic president, but he said toward the end:

"I must point out that our new President has pledged to pursue certain policies that would advance moral evils and threaten human life and dignity, most seriously in the areas of abortion, contraception, marriage, and gender. Of deep concern is the liberty of the Church and the freedom of believers to live according to their consciences."

It is interesting that in four years of Donald Trump as President, Gomez never felt motivated to point out the moral failings of that presidency.

Biden's chief sin is his stand on abortion. Not only does he support keeping it legal, but he has also supported repealing the Hyde Amendment, which has been attached to spending bills over the last 40 years and prohibits the use of U.S. tax dollars to pay for abortions.

It is interesting that in four years of Donald Trump as President, Gomez never felt motivated to point out the moral failings of that presidency.

While I disagree with Biden on the Hyde Amendment and on some of his abortion policies, I did vote for him as clearly morally superior to the alternative who was a liar, a racist, a xenophobe and an incompetent. I also think that the conservatives in the bishops' conference can justly be called out for playing politics with the ecclesiastical positions.

The problem is context.

First of all, the statement that Gomez wants is completely unnecessary. The bishops already have a statement on the worthy reception of the Eucharist: "Happy Are Those Who Are Called to His Supper." The 24-page document, released in 2006, says that Catholics who "knowingly and obstinately repudiate [the church's] definitive teaching" on moral issues should "refrain" from receiving the Eucharist. But the emphasis is on the Catholic himself voluntarily "refraining" from receiving Communion, not on the priest or bishop denying Communion.

Secondly, there is the problem of "selective" enforcement of church teaching. It seems that the opprobrium of the bishops is almost exclusively reserved for liberal Catholic politicians and officials.

Where was the similar judgment among the bishops when Attorney General William Barr, a conservative Catholic, reinstituted the federal death penalty, in contradiction to church teaching. Was the death penalty not a "life issue" then?

Where was the outrage when Catholic officials like Gen. John Kelly, Trump's secretary of Homeland Security and later chief of staff, defended a policy of taking away children from migrants and asylum-seekers? Did we not hold the family sacred then?

Where was the harsh judgment on Catholics in the Trump administration like Ken Cuccinelli, who defended and executed an immigration policy that was contrary to the church's teaching on the rights and dignity of immigrants?

Finally, there is the problem that the bishops might find that no one is following them in their quest to topple Catholic politicians they disagree with on issues like abortion and gay rights or transgender rights. Most Catholics are probably more in line with Joe Biden than the conservative bishops.

The Pew Research Center shows that Catholics are evenly split on abortion (48% in favor and 47% against). Pew also says that a large majority of Catholics (58%) call themselves either political liberals or moderates. Only 37% call themselves conservative. According to the Pew survey, 70% of Catholics say homosexuality should be accepted, and 57% strongly favor or favor same-sex marriage. Such Catholics almost certainly do not want to see religious liberty used as an excuse to fire gay people from their jobs or deny them marriage or refuse to allow gay couples to adopt. Catholics are generally opposed to capital punishment and in favor of immigration. In short, Catholics are political moderates, not conservatives.

The Association of U.S. Catholic Priests statement supporting Cardinal Gregory and the 60 bishops who want to postpone the debate on eucharistic unworthiness is also probably in line with what most Catholics think. We don't want the Eucharist "weaponized" against political opponents. We don't want to arbitrate political issues in the Communion line. We don't want our priests and bishops using the body and blood of Christ as a cudgel to force Catholics to toe the line.

Catholic bishops might find that denying the Eucharist to their political opponents will not change many hearts and minds. But it may serve to drive even more people away from the Catholic Church. Perhaps a better way to lead people to see their point of view is to simply live the gospel of love preached by Jesus by the example of their own lives.