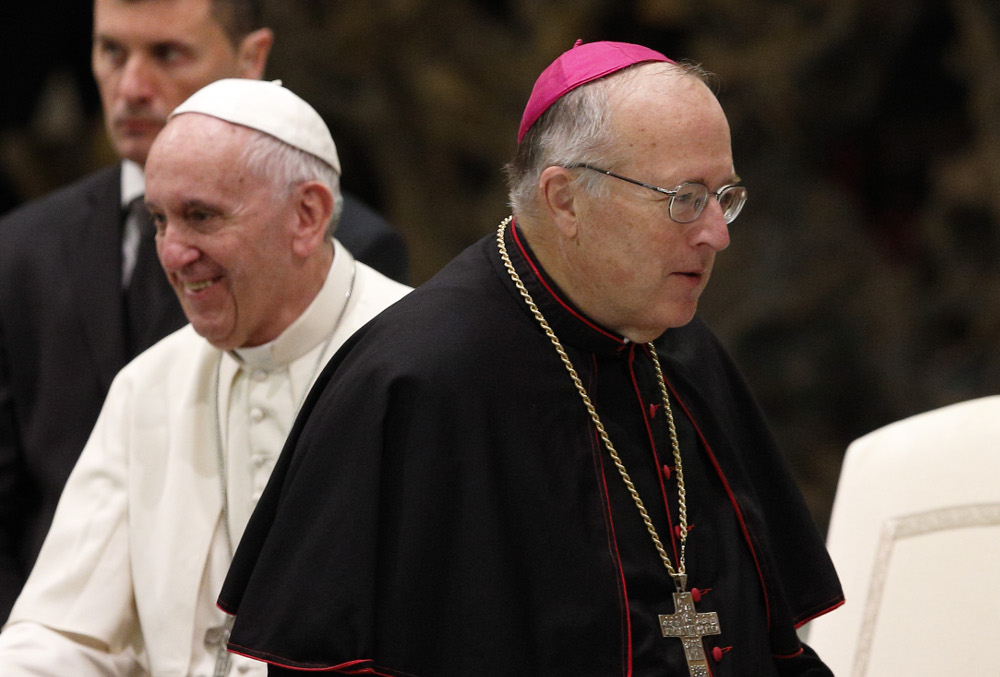 Bishop Robert McElroy of San Diego walks away after greeting Pope Francis during his general audience in Paul VI hall at the Vatican Nov. 23 2016. (CNS/Paul Haring)

In an address at Georgetown University, Bishop Robert McElroy of San Diego criticized both extremes in the fight over religious freedom and called for public consensus based on solidarity to heal our nation in this hyper-partisan age.

McElroy is one of the most brilliant minds in the Catholic hierarchy today, with a doctorate in political science from Stanford University and a doctorate in moral theology from the Pontifical Gregorian University in Rome. Not surprisingly, the 63-year-old bishop is frequently spoken of as a possible successor to Cardinal Donald Wuerl in Washington, DC, who is past retirement age.

McElroy gave his speech on November 16 at a conference at the Berkley Center for Religion, Peace and World Affairs celebrating the 50th anniversary of the death of Rev. John Courtney Murray, the Jesuit who was one of the most influential American theologians of the 20th century. But McElroy was not interested in looking backwards. He wanted to talk about “the issues of the Church and our nation at this moment in our history.”

He began by looking at religious freedom, the issue which made Murray famous. Murray was silenced by the church for writing about religious freedom but later he became one of the main authors of "Dignitatis Humane," the document on religious liberty at the Second Vatican Council.

“During the past decade, the issue of religious liberty has become deeply enmeshed in the bitter divide which grips our nation and corrupts political and moral dialogue,” asserts McElroy.

The Catholic tradition rejects both approaches, he said.

In response to minimalists who deliberately undermine the freedom of the church by reducing religious expression to worship, he says, “The Church must emphasize that a robust appreciation for the specifically religiously inspired works of faith communities in health care, social service and advocacy for the marginalized lie at the core of the Gospel imperative, and any realistic notion of religious liberty in the United States.”

On the other hand, the maximalists “seek to undermine the legitimate authority of the state by endorsing an ever expanding notion of individual rights of conscience in the public sphere without due regard for the governmental pursuit of the common good.”

“This, too,” he says, “is a distortion of the Catholic doctrine of religious liberty.” The church must reject both extremes.

McElroy finds support in Murray’s position that “The right to conscience in public expression is ultimately rooted in the dignity of the human person and the pursuit of the common good. And the public order, that part of the common good which falls to government, is a wholly legitimate pursuit of government even when that common good necessitates restrictions upon the public actions of believers acting in the light of their conscience.”

The church “must defend absolutely the rights of conscience to internal belief, point to the moral warrants for the robust freedom of religious communities, and outline the nuanced Catholic teaching on the rights of believers to act upon their beliefs in society,” says McElroy. “But the Church must be equally dedicated to defending the corresponding governmental right to — at times — restrict conscience-driven actions in pursuit of a genuine common good.”

This balanced position by the church is especially needed in the toxic atmosphere of American politics.

McElroy notes that Murray’s writings about the nature of American society in the 20th century focused on the concept of the public consensus which lay at the heart of American political life.

“For Murray, the key element of the concept was its foundation in concepts of natural law which undergirded American society in fundamental ways, and provided a linkage between the history of American politics and Catholic thought,” explains McElroy.

According to Murray, this consensus “was the glue which held America together, through common moral and spiritual values rather than ties of blood or nationalism,” reports McElroy. “Murray wrote that there was a continual need for reconversion to the public consensus in American society in order to embrace anew the principles of freedom, civic unity, truth, civil conversation, and support for the fundamental institutions of American governance.”

Without this conversion, “Murray argued, the United States would confront a spiritual crisis in the temporal realm, a hollowness in American society and culture, an emptiness of the soul,” says McElroy. “We are living in just such a spiritual crisis; for our national soul has truly been hollowed out.”

A commitment to solidarity “will demand a rejection of the tribal element of politics which sees voting as the opportunity to advance the well-being of our race, our class, our religious community at the expense of others,” says McElroy. “It will entail a purging of the inherent human tendency to allow anger and wedge issues to destroy our ties as Americans. A spiritual conversion to solidarity among citizens demands that we reject the increasing habit in our political culture of attributing all differences of opinion to ignorance or malice.”

“The sickness in the political soul of our nation will only be healed if society undertakes a massive regeneration of the political ties which unite us as a people and begins to see these ties as more important than the divisions which tear us apart,” says McElroy.