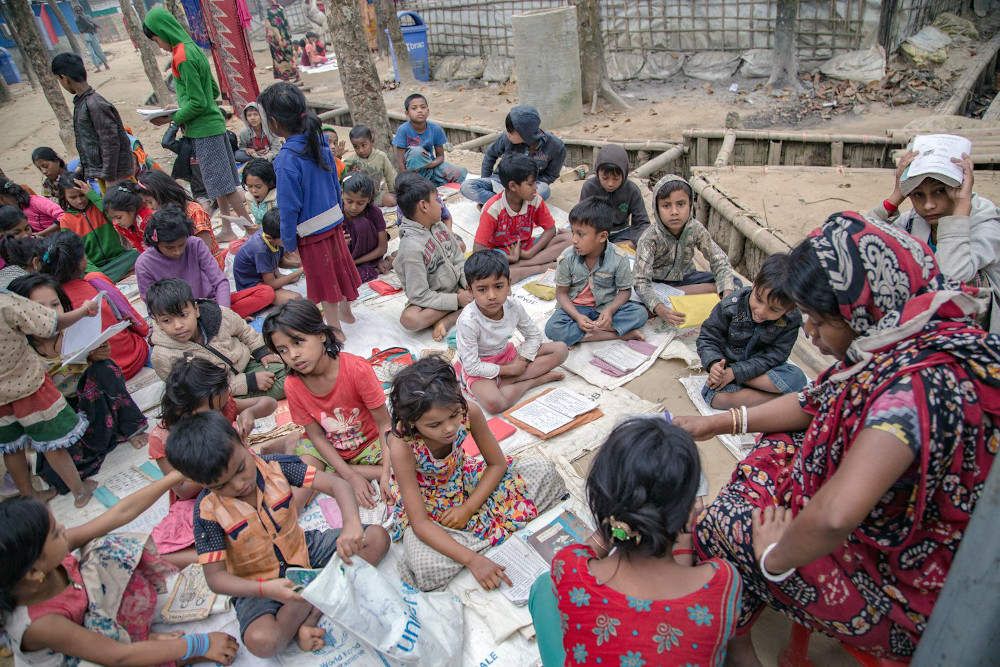 Hindu Rohingya refugee children study at a makeshift school in a Hindu refugee camp near the larger Kutupalong refugee area in Dec. 2018 in Bangladesh. (AP/RNS/Amir Hamza)

The number of refugees in the world may decline this year, but not for a good reason. Today, there are about 70 million forcibly displaced people worldwide, of whom 41 million are internally displaced in their own countries and 26 million are refugees, forced to flee their homelands.

Refugees and displaced persons live under conditions ideal for the spread of COVID-19: packed together in tents or crowded into housing where social distancing is impossible. There are very limited facilities for washing hands. The medical facilities, if there are any, are unable to keep up with current needs, let alone a pandemic.

In an ideal world, these refugees would be able to return to their countries, settle where they are now or be allowed into countries that would welcome them. That is not going to happen.

Most refugees fled their countries because of political, racial, ethnic or religious persecution or because their countries are ravaged by war. The factors that led them to leave their countries have not changed for the better. Nor will they be welcomed elsewhere, with nations shutting their borders to newcomers.

Instead, these refugees, especially those in camps, are going to be ravaged by the coronavirus.

The world’s largest refugee camp is in Kutupalong, Bangladesh, with more than 630,000 Rohingya, who escaped genocidal attacks by the military in their native Myanmar. Living in very primitive conditions, they will not be able to fend off infection.

Most of the world’s refugees (57%) are from Syria (6.7 million), Afghanistan (2.7 million) and South Sudan (2.3 million), all areas where there has been armed conflict for decades. The U.N. secretary-general and the pope have called for a worldwide cease-fire so that people can focus on fighting COVID-19 instead of each other.

The likelihood of these refugees returning to their countries is remote because of the conflicts still going on there. But even if they could return, the situation in their home countries is not good. In South Sudan, for example, the Catholic bishop of Yei said that his people fear hunger more than COVID-19. “Hunger is everywhere; even when there is no coronavirus, there is hunger, and ours is a chronic hunger, we know it just too well,” Bishop Erkolano Lodu Tombe told Catholic News Agency.

Once again, the most vulnerable will suffer most from the pandemic.

This is true not only of refugees but also in the United States, among people of color, those with low incomes and those already suffering from illnesses. These groups are more susceptible to infection and death and often live in crowded housing where social distancing is difficult if not impossible. If they have jobs, they are not ones that can be done from home.

Nor is the government doing much to help those most vulnerable. While the Trump administration is ordering meatpacking plants to be reopened, it is not ordering them to take precautions to protect their workers. Nor is it ordering employers to pay hazard pay to essential workers.

But what we have seen in the U.S. is far more present in the developing world. The pandemic is only just now reaching some places where the populace’s vulnerability will push the death toll into the millions.

Some African countries were able to slow infections because they were experienced in dealing with earlier epidemics of AIDS and Ebola. As a result, they have public health workers who know how contact tracing and quarantines work. But it is hard to believe that they will not soon be overwhelmed by the crisis.

The COVID-19 pandemic is not an unexpected event. It was predicted by epidemiologists for decades. Nor are its disastrous impacts on vulnerable populations a surprise. What is happening is not just the result of a novel virus, it is also the result of generations of exploitation and neglect. Returning to normal is not an option; every step we take now should direct us toward a better and more just future.