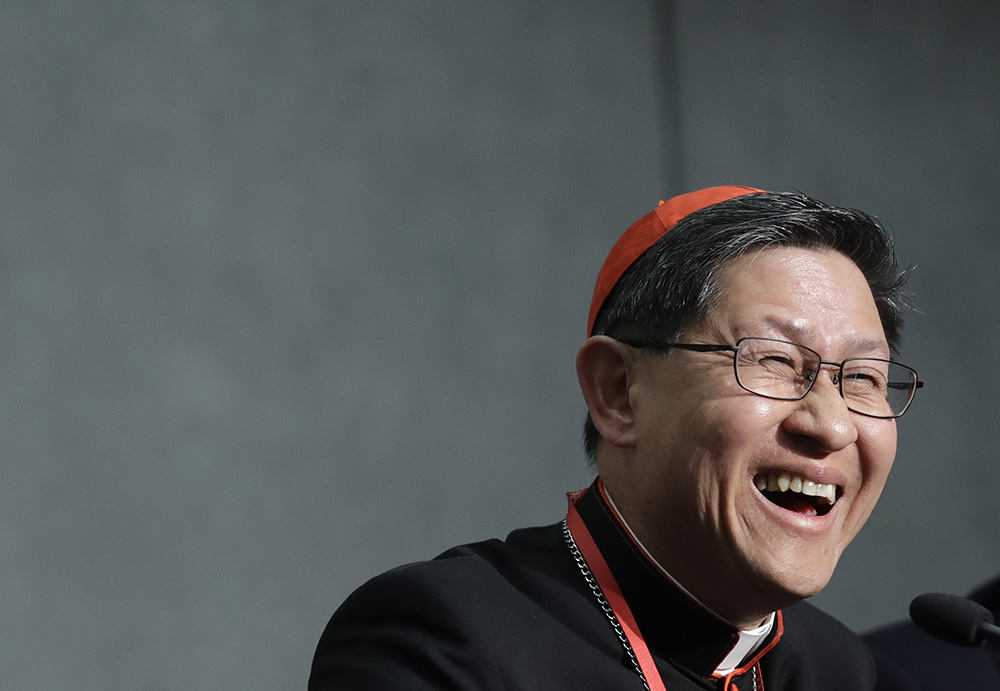 Cardinal Luis Tagle smiles during a news conference on the Synod at the Vatican on Oct. 23, 2018. (AP/Alessandra Tarantino)

In one of the most significant appointments of his papacy, Pope Francis has chosen the Filipino Cardinal Luis Antonio Tagle to head the Vatican office that deals with most of the dioceses in Africa, Asia and Oceania. As prefect of the Congregation for the Evangelization of Peoples, he will help shape the church in these territories.

The 62-year-old Tagle, whose father was Filipino and his mother of Chinese heritage, is currently archbishop of Manila. After his 1982 priestly ordination in the Philippines, he studied at the Catholic University of America in Washington, D.C., where he earned a doctorate in theology, writing his dissertation on the evolution of episcopal collegiality since the Second Vatican Council.

He also studied in Rome for seven years and was appointed by John Paul II to the Church's International Theological Commission in 1997.

Well-liked and respected at home, Tagle has all of the attributes prized by Francis. He is both bright and pastoral. He has a deep concern for the poor and is not afraid to speak out for justice. He is from the peripheries, yet has gotten to know the rest of the world though his travels as president of Caritas International, the church's international aid program.

This appointment is important for three reasons.

First, Tagle is an enthusiastic supporter of Francis, who needs all the support he can get in the Vatican's Curia. Tagle has the same pastoral approach to church issues as does Francis. He brings to the Curia a voice that will be unambiguously pro-Francis. Besides serving as prefect, he will also be a member of other Vatican congregations where he can support Francis' agenda.

Frankly, Francis has been slow in replacing holdovers from the previous papacy. He has even kept and promoted cardinals who are out of sync with his views, such as Cardinal Robert Sarah as prefect of the Congregation for Divine Worship. No matter how much the Curia is reorganized, unless the people at the wheels of power support the pope, none of the reforms will matter.

Second, this appointment is important because the influence of his congregation is far-reaching. The congregation, originally called the Congregation for the Propagation of the Faith (Propaganda Fide), was created in 1622 to deal with the missions opened up by European colonization.

Under the proposed reform of the Curia, this congregation will have two sections: one for the missions and one for re-evangelizing  the old Christian world. The vast portfolio of the congregation has led some Vatican commentators to refer to its prefect as the red pope, for the scarlet robes that the cardinal wears.

Coming from Asia, Tagle will be sympathetic to Francis' desire that Christianity reflect local cultures and traditions rather than simply imitating how Catholicism is lived in Europe.

As prefect, Tagle will also distribute funds collected by the Society for the Propagation of the Faith, which supports missionary work around the world. Here he could direct the money to serve the people rather than the clergy. Francis wants a poor church serving the poor, yet in some missionary countries the clergy live better than their people.

Lastly, because of this appointment, Tagle is now well positioned to succeed Pope Francis if Tagle does well in his job as prefect. But danger awaits him in his new job. Many believe that the next stage of the sex abuse scandal will take place in Africa and Asia, the areas for which he is responsible. He will need to make sure that bishops in Africa and Asia take seriously Francis' commitment to deal with abusive priests. How he deals with bishops who cover up abuse could determine how he is viewed in the wider church.

Also, since his congregation deals with millions of dollars in donations for the missions, he could easily find himself embroiled in the Vatican financial scandals. Financial or sexual scandals could ruin his service as prefect.

But if Tagle avoids these pitfalls, he would be an obvious choice if the conclave wants the next pope to be in continuity with the present pope, since his views are so much in sync with those of Francis. Many cardinal electors would like the fact that, although he is from outside of Rome, he will also understand the Roman Curia because of his work there as prefect, particularly if he deals well with sexual abuse and financial scandals.

The appointment of Tagle shows Francis' desire to have friends to support him as well as to have non-European voices at the highest level of decision-making in the church. As prefect, Tagle will have a positive impact on the papacy of Francis and on the church in Asia and Africa. He might also be the first Asian pope in the modern era. But before that, he will have a lot to do as prefect of the Congregation for the Evangelization of Peoples.