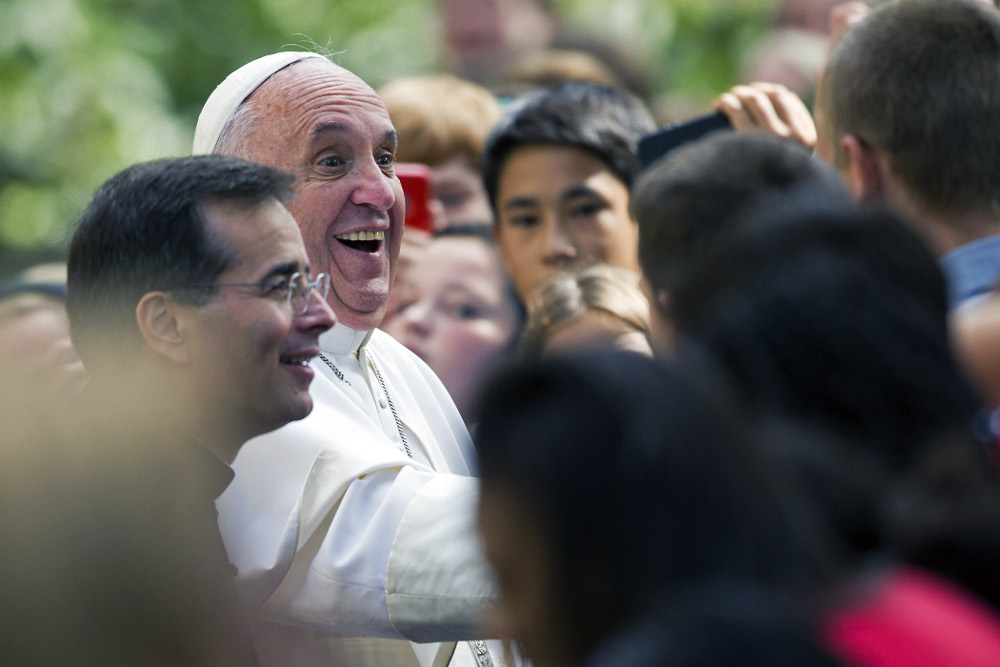 Pope Francis laughs while greeting school children after he arrived at the Apostolic Nunciature, the Vatican’s diplomatic mission in Washington, on Sept. 24, 2015, after his address to a joint meeting of Congress on Capitol Hill. (AP/Cliff Owen)

We can all recognize the dangers Pope Francis sees in today's culture. In chapter four of his apostolic exhortation  "Gaudete et Exsultate" ("Rejoice and be Glad"), Francis lists "a sense of anxiety, sometimes violent, that distracts and debilitates; negativity and sullenness; the self-content bred by consumerism; individualism; and all those forms of ersatz spirituality —  having nothing to do with God — that dominate the current religious marketplace."

In answer, Pope Francis gives us the five great expressions of love for God and neighbor that he considers of particular importance in the light of the dangers present in today's culture.

In earlier columns, I discussed chapters one, two, and three of his March 19 apostolic exhortation.

In response to these dangers, the pope says we need a "solid grounding in the God who loves and sustains us." This is what gives us the inner strength to persevere, not only in life's ups and downs, but also in the face of "hostility, betrayal and failings on the part of others."

The inner strength that comes from knowing that God loves us "makes it possible for us, in our fast-paced, noisy and aggressive world, to give a witness of holiness through patience and constancy in doing good."

Quoting from Paul's letter to the Romans, he urges us not to repay evil for evil, not to seek revenge, and not to be overcome by evil, but instead to "overcome evil with good."

He even chides the Catholic media, where "limits can be overstepped, defamation and slander can become commonplace, and all ethical standards and respect for the good name of others can be abandoned." Here, he continues, "It is striking that at times, in claiming to uphold the other commandments, they completely ignore the eighth, which forbids bearing false witness or lying, and ruthlessly vilify others."

On the other hand, "The saints do not waste energy complaining about the failings of others; they can hold their tongue before the faults of their brothers and sisters, and avoid the verbal violence that demeans and mistreats others."

Only through humiliation does one attain holiness, the pope asserts. "If you are unable to suffer and offer up a few humiliations, you are not humble and you are not on the path to holiness," he adds. "Humiliation makes you resemble Jesus; it is an unavoidable aspect of the imitation of Christ."

Francis praises those who, in the face of daily humiliations, "keep silent to save their families, who prefer to praise others rather than boast about themselves, or who choose the less welcome tasks, at times even choosing to bear an injustice so as to offer it to the Lord."

At the same time, "because someone is free of selfishness, he or she can dare to disagree gently, to demand justice or to defend the weak before the powerful, even if it may harm his or her reputation."

Joy and a sense of humor

Saints are joyful and full of good humor, according to Francis, "not timid, morose, acerbic or melancholy." Quoting St. Thomas Aquinas, he writes, "the necessary result of the love of charity is joy; since every lover rejoices at being united to the beloved … the effect of charity is joy." Supernatural joy comes from knowing we are infinitely loved.

He contrasts this spiritual joy with the false joy offered by today's consumerist culture. "Consumerism only bloats the heart. It can offer occasional and passing pleasures, but not joy." Joy comes from giving and loving. When we "focus primarily on our own needs, we condemn ourselves to a joyless existence."

Christian joy, Francis argues, "is usually accompanied by a sense of humor." Indeed, "Ill humor is no sign of holiness."

Holiness requires boldness and passion, "an impulse to evangelize and to leave a mark in this world." Francis notes that Jesus' "compassion made him go out actively to preach and to send others on a mission of healing and liberation." Francis warns against being "paralyzed by fear and excessive caution."

This fear can manifest itself in many ways: "intransigence, the rejection of new ideas and approaches, dogmatism, nostalgia, pessimism, hiding behind rules and regulations."

Francis says there is a way out of this fear: "God is eternal newness. He impels us constantly to set out anew, to pass beyond what is familiar, to the fringes and beyond. He takes us to where humanity is most wounded, where men and women, beneath the appearance of a shallow conformity, continue to seek an answer to the question of life's meaning.

"God is not afraid! He is fearless! He is always greater than our plans and schemes." 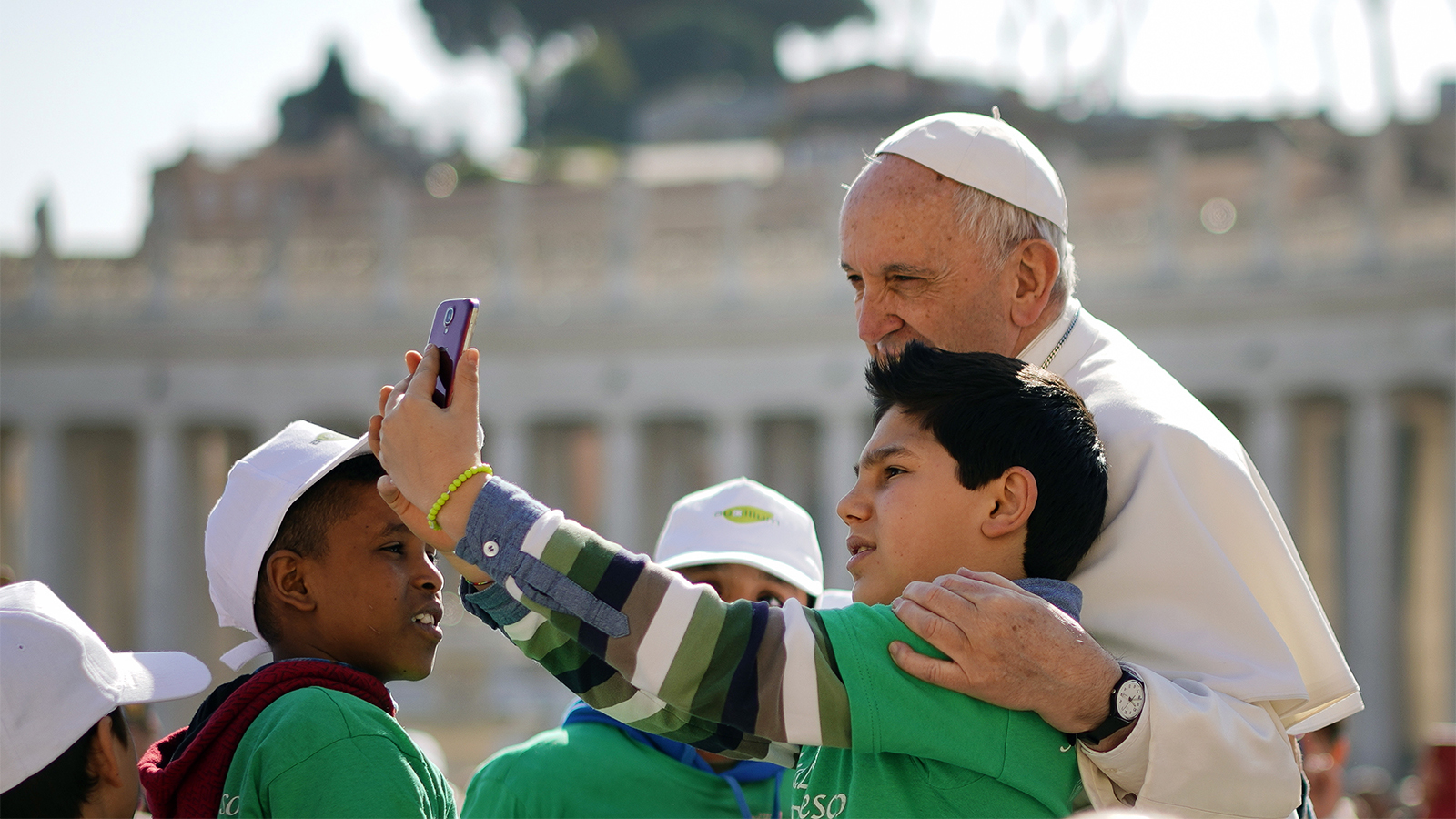 A boy takes a selfie with Pope Francis as he arrives in St. Peter's Square for his general weekly audience, at the Vatican on March 14, 2018. March 13 was the 5-year anniversary of Pope Francis’ election as Bishop of Rome. (AP/Andrew Medichini)

Francis does not believe in solitary saints. Rather, he says, "growth in holiness is a journey in community, side by side with others." Each community is called to create a "God-enlightened space in which to experience the hidden presence of the risen Lord."

"Sharing the word and celebrating the Eucharist together fosters fraternity and makes us a holy and missionary community."

Community, he says, is also made up of small everyday things. "A community that cherishes the little details of love, whose members care for one another and create an open and evangelizing environment, is a place where the risen Lord is present, sanctifying it in accordance with the Father's plan."

Finally, Francis says that "holiness consists in a habitual openness to the transcendent, expressed in prayer and adoration," but this "prayer need not be lengthy or involve intense emotions." He quotes Saint Teresa of Avila, who said prayer "is nothing but friendly intercourse, and frequent solitary converse, with him who we know loves us." This prayer is not just for the privileged few but for all.

He asks us, "Are there moments when you place yourself quietly in the Lord's presence, when you calmly spend time with him, when you bask in his gaze? Do you let his fire inflame your heart? Unless you let him warm you more and more with his love and tenderness, you will not catch fire."

Francis encourages the prayerful reading of Scripture. Quoting the bishops of India, he writes, "devotion to the word of God is not simply one of many devotions, beautiful but somewhat optional. It goes to the very heart and identity of Christian life."

"Meeting Jesus in the Scriptures leads us to the Eucharist," he says. "In the Eucharist, the one true God receives the greatest worship the world can give him, for it is Christ himself who is offered. When we receive him in Holy Communion, we renew our covenant with him and allow him to carry out ever more fully his work of transforming our lives."