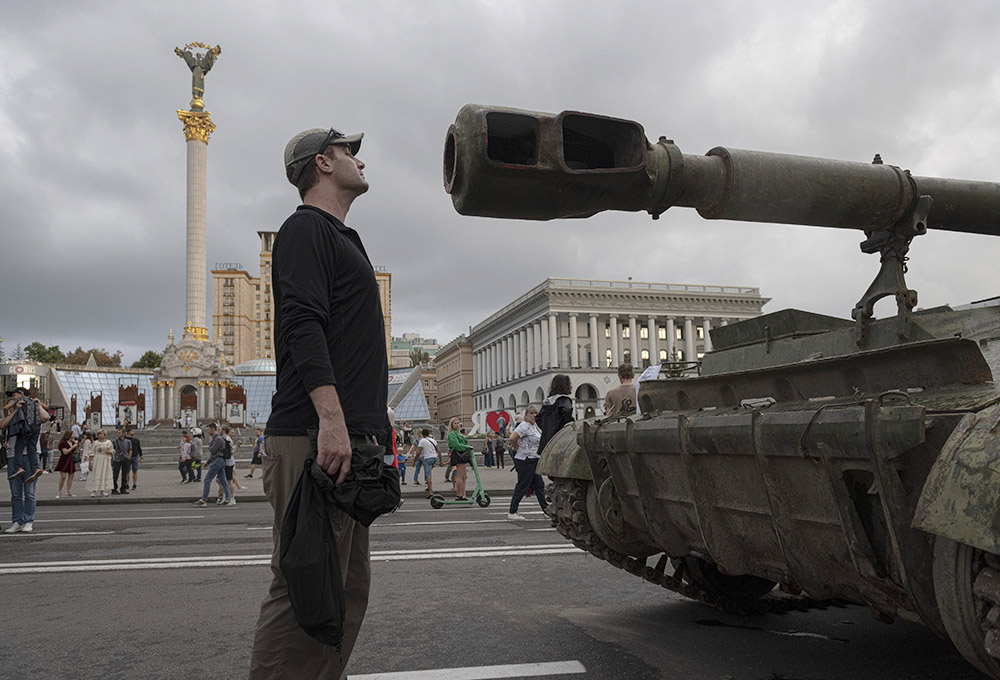 People visit an avenue where burned-out and captured Russian tanks and infantry carriers have been displayed in downtown Kyiv, Ukraine, Aug. 20. (AP/Andrew Kravchenko)

Six months ago today, on orders from President Vladimir Putin, Russian troops began their full-scale invasion of Ukraine. In a year of nastiness in our domestic politics and threats to democracy around the world, the war in Ukraine remains the front lines, and everything else, everything, is a secondary theater of cultural conflict.

You will remember that at first, we were told the war would be quickly over, that the Ukrainians would be no match for the powerful Russian army. Each night, we watched and listened as air raid sirens in Kyiv and Lviv and Odesa gave way to the sounds and sights of massive explosions. We remember CNN showing us the 40-mile-long column of Russian armor making its way to Kyiv.

It was all so grim and seemed so hopeless. I remember feeling helpless and feeling it acutely. Yes, we could send money to help the refugees, but a free and democratic nation was being swallowed the way a python swallows one of its unlucky neighbors.

The Ukrainian people, however, were not feeling helpless or hopeless. Their bravery, their defiance shone through, not least in the person of their president, Volodymyr Zelenskyy. He refused President Joe Biden's offer of evacuation. He stayed with his people, and his people stayed with the fight.

That Russian armored column was destroyed, the attack on Kyiv was suspended, and for a while there was talk of Russian generals resolving upon a Caesarean solution to the problem of Putin.

For a moment, we allowed ourselves to think that Ukraine could win the war, but then came reports from Bucha, a suburb of Kyiv, where atrocities against civilians had been widespread and the inhumanity of war was on full display. Secretary of State Anthony Blinken said after the atrocities at Bucha and elsewhere were exposed, "We can't become numb to this. We can't normalize this."

But the words were barely out of his mouth when we did start to become numb to the violence. Other news items began to lead the news. Anderson Cooper was back in CNN's New York studio, not reporting from Lviv. The Select Committee hearings began. Gas prices skyrocketed. The Warriors beat the Celtics in the NBA Finals.

We have seen the American right display its fascist sympathies, bad-mouthing Zelenskyy early in the war. After Zelenskyy's speech to the Russian people early in the war, urging them to demand their government stop the war, Fox News' Laura Ingraham called the speech a "pathetic display." Republican Senate candidate J.D. Vance appeared on Steve Bannon's "War Room" and said, "I gotta be honest with you, I don't really care what happens to Ukraine one way or another."

The American left engaged some deplorable arguments as well. The witness to nonviolence of some Christians is commendable, but not when it traffics in Kremlin talking points. "The current crisis was seeded in part by NATO's expansion after 1997 into 14 additional countries, including former Warsaw Pact countries and three former Soviet states," wrote Georgetown University's Eli McCarthy in an essay at America magazine.

Sovereign nations that had been forced to live under Soviet dictatorships do not need lectures from American academics about what alliances they can form. Putin is right to perceive a free, pluralistic Ukraine as an existential threat to his authoritarian nationalism, whether or not NATO expanded.

The most humane moral voice in this whole, terrible war has been Zelenskyy's. Scott Pelley of "60 Minutes" interviewed Zelenskyy after the atrocities in Bucha were exposed and the Russian forces had withdrawn from Kyiv. Pelley asked Zelenskyy if Ukraine had won the battle of Kyiv.

"I think yes but ... Bucha is part of greater Kyiv, Bucha, Irpin, Hostomel," Zelenskyy replied. "If the people of those towns were wiped out, then did we win this battle? I'm not sure. We've withstood and we did not give up what was ours but whether we won, I can't say."

That is the humane, moral, Christian analysis of a man leading his nation in a just war. 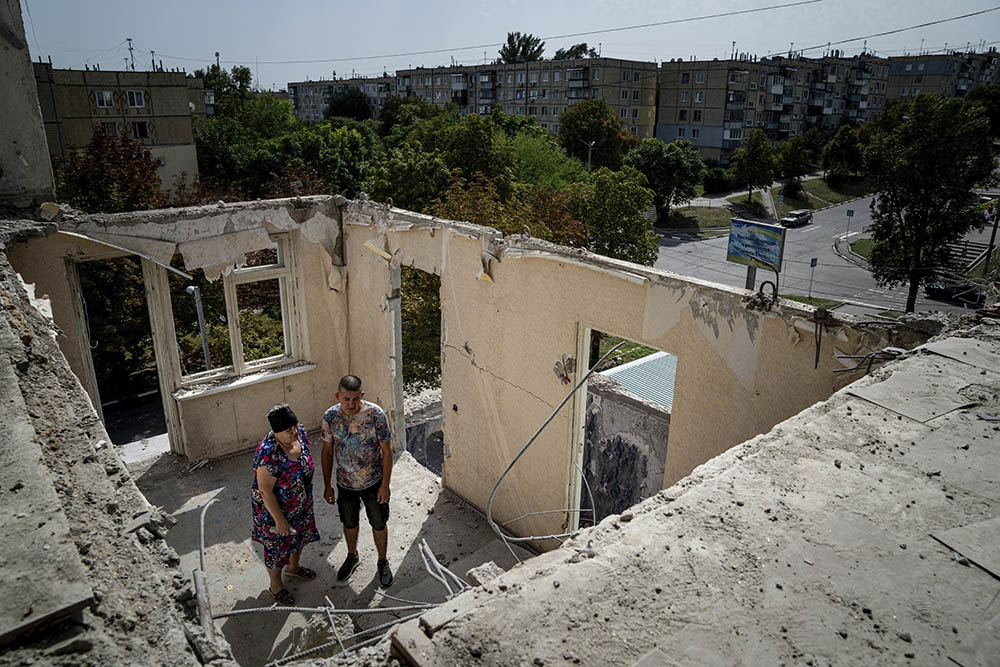 Widow Liudmyla Shyshkina, 74, and her son Pavlo Shyshkin, 46, stand at their apartment house, which was destroyed after Russian bombardment of residential area in Nikopol, Ukraine, Aug, 22. (AP/Evgeniy Maloletka)

Roger Cohen in The New York Times wrote a powerful story Sunday, with magnificent photographs as well, about Odesa, the port city on the Black Sea that serves as the conduit for Ukrainian grain to the rest of the world, but that also embodies the values of cosmopolitanism that put the light back into Enlightenment. I am not sure if Cohen overstates the significance of the city from a military perspective, but he nails the cultural significance:

Odesa is the crux of the war not only because it holds the key to the Black Sea but also because in it the battle between Russian and Ukrainian identity — an imperial past and a democratic future, a closed system and one connected to the world — plays out with particular intensity. This is the city, of fierce independence and stubborn inclusiveness, that symbolizes all Mr. Putin wants to annihilate in Ukraine.

I deplore the fact we are hobbled by that horrible, inadequate word "identity," but since we are, let us point out that for all the differences between Ukraine and "the West," it is the "stubborn inclusiveness" and a system "connected to the world" that is the common point of identity, of sameness.

As Zelenskyy said, the Ukrainians "did not give up what was ours." Bless them, they are not giving up on what we in the West can call "ours" either. The battle in Ukraine is not only between Ukraine and Russia but between closedness and openness, between ethnic nationalism and cosmopolitanism, between "might makes right" and the messy, frustrating, complicated style of democracy that we in the West have built. The people of Ukraine are fighting for us, not just for themselves.

"We are defending the ability of a person to live in the modern world," Zelenskyy said in that same "60 Minutes" interview. The stories from the front lines may have moved to the inside pages of the newspaper. The television cameras have moved on to other tragedies and horrors. But we must never forget: So long as the war is being fought, the Ukrainians are fighting for us, for our ability to live in the modern world in a decent and humane way. They deserve all the support we can muster.

This story appears in the War in Ukraine feature series. View the full series.
A version of this story appeared in the Sept 2-15, 2022 print issue under the headline: The moral stakes are still high in Ukraine.