It is the 18th century, somewhere in the rainforest between Northeastern Argentina and Eastern Paraguay. A solitary Jesuit missionary by the name of Father Gabriel (Jeremy Irons), ant-like against the majestic, frightening backdrop of Iguazu Falls, inches his way up the treacherous heights against raging rapids, jagged boulders and untamed jungle. The musical score, a soaring orchestral piece, literally flows into the sequence. The music is so organic to the imagery, it makes for a visceral experience that is truly audiovisual.

We then see the missionary seated on a rock in an isolated clearing in the jungle. In contrast to the previous scene, it is quiet and placid here. He takes a wind instrument, an oboe, onto his lips and starts playing a melody. It is sublime in its honesty, wordlessly bespeaking the paradox of a fragile humanity at once wounded and beautiful.

Soon enough, Indigenous Guarani warriors, drawn by the music, emerge from the lush forest canopy. At first, the scene is tentative and foreboding, we do not know what to expect. Then one of the warriors takes the missionary's hand and, in a peaceful gesture, ushers him into the jungle while the rest of the men follow. The melody seamlessly fades-in again, taking a life of its own as it floats and lingers in the forest air.

The sequence is from the critically acclaimed film "The Mission" (Roland Joffé, 1986), and the musical score is the work of esteemed Italian composer Ennio Morricone, who died July 6 at the age of 91. Christian circles would most likely consider his work in this religious-historical epic as his most memorable, but Morricone had been a prolific composer for decades with some 500 works, running the gamut of cinematic genres, to his credit.

His foray into cinema began in the 1960s with his partnership with compatriot and longtime friend Sergio Leone who directed enormously popular spaghetti westerns. Morricone's standout piece, from "The Good, the Bad, and the Ugly" with Clint Eastwood (1966), is an outlandish sonic polyphony evoking the whistling howl of a coyote. The film's theme went on to become a worldwide earworm, and continues to be considered as a Hollywood anthem for the old west.

At this earlier stage of his career in cinema, Morricone created musical scores that refused to hang back, often sharing front and center with the lead actors. Leone's westerns, which were marked by brooding pauses, invited such expressive scores to help add texture and move the narrative forward. But it would be incorrect, if not unjust, to say that Morricone's music upstages the actors.

Gillo Pontecorvo's political drama "The Battle of Algiers" (1966) is a clear example of how Morricone's music is so wedded with the unfolding visual story. For Pontecorvo's highly influential film, a cinematic tinderbox depicting the Algerian struggle for independence from French rule, Morricone composes contrasting musical motifs to capture the tensive atmosphere of the story arc. The fusion of image and music is a ticking time bomb ready to detonate at pivotal moments.

In the endearing Italian drama "Cinema Paradiso" (1988), filmmaker Guiseppe Tornatore's love letter to cinema, Morricone's music unapologetically embraces emotion and nostalgia. Yet, it is not sentimentality for sentimentality's sake: He calibrates the score to the film's emotional barometer. Constantly and seamlessly, imagery produces music, and vice-versa.

Born in Rome in 1928, Morricone received early musical training from his father who was a trumpet player and composed his first piece at age six. He followed his father's footsteps and studied trumpet, alongside classical composition, and arrangement. Prior to his work in cinema, he did musical arrangement for radio and television and for jazz and pop artists. 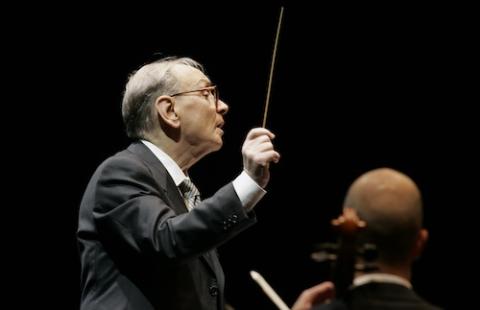 In 2015 interview with Channel 4 News (in the U.K.), Morricone named Johann Sebastian Bach as his musical inspiration, describing the great German master's oeuvre as a foundation, "a brick" to build dignity into his musical scores.

He was given an honorary Oscar for lifetime achievement in 2009, having been nominated five times in a span of four decades. His first true win came in 2016 for Quentin Tarantino's "The Hateful Eight," a deserving piece, although not his best work. Widely considered to be his magnum opus, an opinion Morricone himself shares, is his score for "The Mission," which, ironically, did not win him an Oscar for Best Original Musical Score in 1987. In "The Mission," Morricone interweaves the established harmonies of western music, and the timeless Indigenous rhythms of the Guarani, celebrating both in a creative tension.

I would add that what sets apart this particular work is its astonishing capacity to paint in music what is transcendent and unseen.

One pivotal scene merits re-visiting. Captain Rodrigo Mendoza (Robert de Niro), a slave-trader and murderer who seeks divine and human clemency, agrees to Father Gabriel's prescribed penance: to carry the weight of his own weapons up Iguazu Falls, and to surrender his fate to his victims — the Guarani. The climb is a death-defying via crucis; the foreboding music echoes this.

After what seems like an eternity, he reaches his destination where a group of Guarani warriors, nonplussed by his presence, meet him. A young warrior immediately puts a knife against Mendoza's throat, but in an unanticipated gesture, the chief orders him not only to desist, but to set their erstwhile oppressor free from the load that he bears. The act of utmost humanity, undeserved and freely given, makes Mendoza weep like a child. The Guarani gather around him as Father Gabriel offers a brotherly embrace. At this delicate turn, all ambient sounds are muted, we only hear a reprise of the haunting melody of "Gabriel's Oboe" telling the story of a miracle that happened where it truly counts — in the hidden, wordless depths of the human heart.

In memory of Ennio Morricone, the Italian maestro whose genius sets to music what is seen and unseen, I typed a modest poem-tribute on a manual typewriter from 1968, the year he scaled back on his other composing assignments to dedicate his lifework to cinema:

Music
from an oboe solo
lifted by the orchestral waters
of the great Iguazu.
You are calling
Pied Piper, Cross Bearer,
to humanity ancient
only one day old.

It is here
it is not here
sacred symphony
cathedral in time.

Cross and culture
kiss one another
the music is mission
the spirit, Guarani.

Rise, oboe solo
to the great Iguazu
beyond clouds and sky.
I hear you, Ennio.
We hear you.

[Precious Blood Br. Antonio D. Sison is associate professor of systematic theology at Catholic Theological Union in Chicago, with a research interest in global audiovisual culture. His latest books are The Sacred Foodways of Film (Pickwick, 2016), and the upcoming The Art of Indigenous Inculturation (Orbis, Spring 2021).]