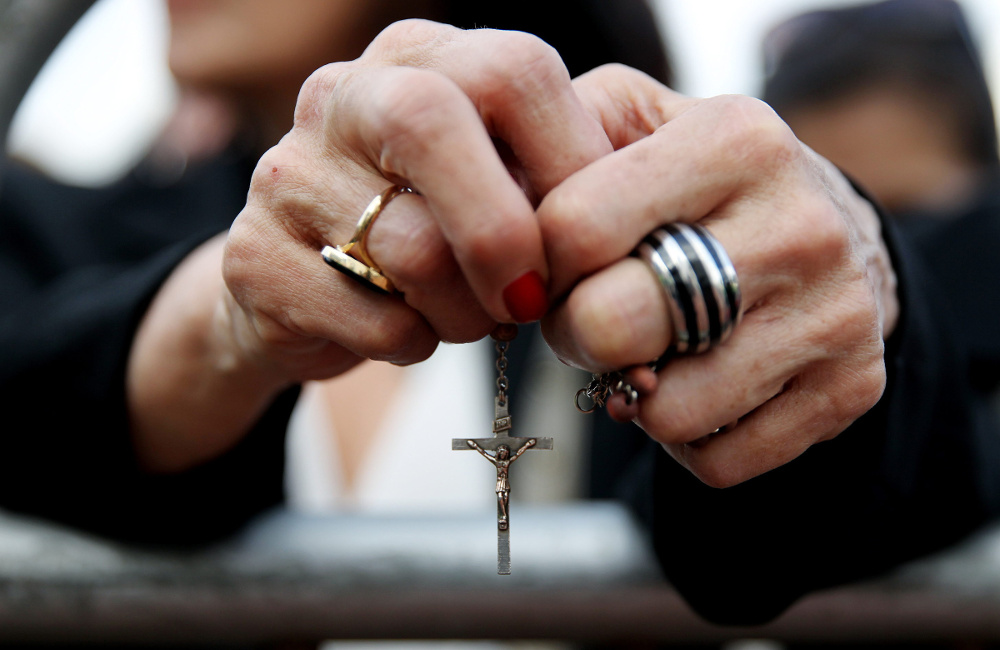 A woman holds a crucifix during Mass in Bogota, Colombia, in this 2015 file photo. (CNS/EPA/Leonardo Munoz)

As a child, I had a fairly good idea of what God looked like. When I prayed, I imagined God in the form of Msgr. McMahon, the pastor of my parish. Certainly the way people treated him seemed like he must be a step away from divinity. As a result, I conjured an image for God as an older male, balding, wearing a white alb, and maybe even speaking an Irish brogue.

I knew God wasn't Msgr. McMahon, but being surrounded by male-only church officials and male-only pronouns for the divine, the image of a masculine God was cemented for the first 20 years of my life. It took many more years to pry that male-only template out of my heart. But it still slips back from time to time.

When it does, the template carries overlays of male superiority that affect how I see the world, how I work, how I love and interact with others. Even deeper, it affects how I feel about myself. When young Catholic women see only men in the highest levels of leadership, the impact is wounding and lasting. The image casts its own harmful shadow on the male psyche, too.

That is one of the reasons why the Vatican commission on women deacons, whose results I hope will be released in the new year, is so important for our church. We have the opportunity to offer our faith's daughters the chance to see themselves as sacred equals, not only in the church, but also within themselves.

Another study by MIT researchers in 2012 revealed that seeing women serve as leaders in local politics led to increased educational aspirations, not only on the part of young women, but in their parents, too. Whereas in villages that had never seen local women leaders, parents were 45 percent less likely to say that they wanted their daughters to finish school or study beyond secondary school.

Additionally, a 2015 KPMG study discovered that among women surveyed, 84 percent "reported that having positive leadership role models helped them feel confident about what they could accomplish in life."

It is my hope that as we see more women leaders in our church, we women will also believe more deeply in ourselves.

While modern Catholicism celebrates women as lectors and youth leaders, pastoral associates or diocesan administrators, women's broader leadership in liturgy and decision-making roles remains absent. While we may not have many role models of women's high-level leadership to lift up, we can certainly look to our past to see women who led, starting with the only deacon named in Christian scriptures: a woman, Phoebe (Romans 16:1).

Throughout the centuries, we have historical evidence of Catholic women serving in multiple roles, including as deacons, priests, and bishops. With regards to women deacons, this year marks the 1,000 anniversary of a letter from Pope Benedict VIII to the bishop of Porto, Portugal, in 1017. The pope wrote, "In the same way, we concede and confirm to you and to your successors in perpetuity every Episcopal ordination, not only of presbyters but also of deacons or deaconesses."

To be sure, even if Catholic women are re-welcomed with men to be deacons next year, significant concerns remain. Women who feel called to be deacons may step forward, but what about women who feel called to other ministries that are still restricted to male-only policies? What about the culture of clericalism that pervades the current roles? Only a transformation of leadership and how we understand ministry will truly save us over time.

That being said, I do believe that women deacons will be a step forward on the long arc of justice. For example, I can't imagine the Vatican would even be discussing women deacons if the church had not first experienced women as lay ecclesial ministers.

The church's saying, lex orandi, lex credendi, refers to the fact that what we pray is what we believe. The similar phrase, "seeing is believing," also holds true. What we see often becomes, consciously or unconsciously, what we believe.

It is my hope that as we see more women leaders in our church, we women will also believe more deeply in ourselves. And church officials who may initially think that the sky is falling, will come to see that it is simply heaven, the kin-dom of God, drawing nearer.

Note: After almost 10 years, this is my last column for the Young Voices series. I want to ensure space for more voices and I am grateful to National Catholic Reporter for providing a space for young adult Catholics to be seen and heard among Catholic news. Seeing is, indeed, believing.