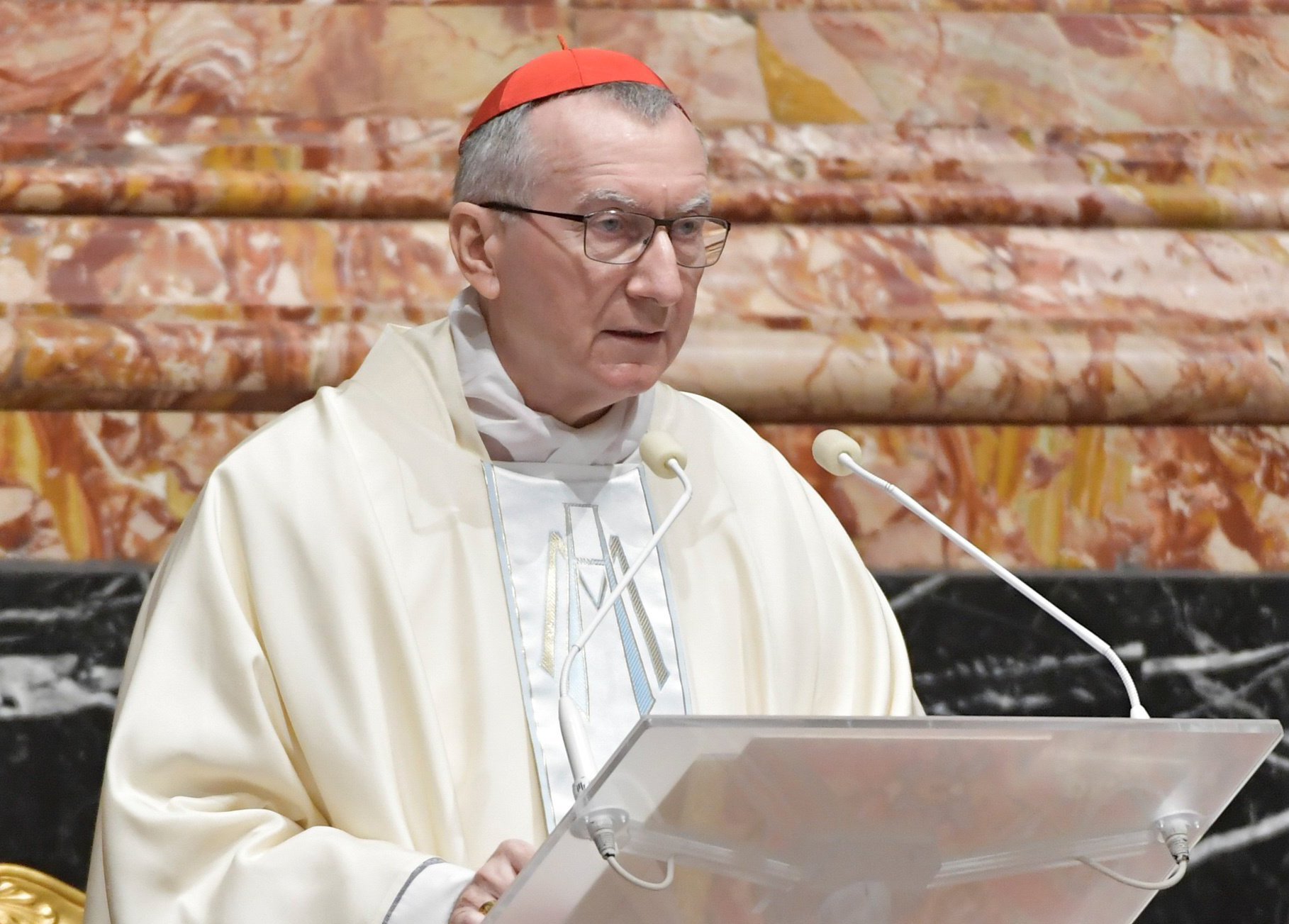 Cardinal Pietro Parolin, Vatican secretary of state, is pictured in a Jan. 1, 2021, photo. Media outlets that identify as Catholic must live "in a spirit of communion" with the pope, Cardinal Parolin said during a gala dinner for EWTN's Europe-based staff in Frascati, Italy, Oct. 19, 2022. (CNS/Vatican Media)

The Vatican's top diplomat has called on the U.S.-based media conglomerate Eternal Word Television Network, which regularly criticizes Pope Francis, to make "communion with the Pope be the distinctive sign" of the operation's work.

Catholic media, said Italian Cardinal Pietro Parolin, can be an active part of church life "first of all by living in a spirit of communion with the Bishop of Rome."

"This is all the more urgent today in a time marked by overly-dramatic debates, also within the Church, which do not even spare the person and the Magisterium of the Pontiff," he added.

Parolin, who serves at the Vatican's secretary of state, delivered his remarks at the invitation of EWTN, as the network is known, at a meeting of its European affiliates in Frascati, Italy, on Oct. 19. His remarks were published by the Vatican on Oct. 21.

"The means of communication, even more so if they purport to highlight their Catholic identity, must strive not to spread hate, but rather, to promote a non-hostile communication," the cardinal said.

In recent years, EWTN, which also owns the National Catholic Register and Catholic News Agency — and is one of the Catholic Church's largest media enterprises — has become known for its regular antagonistic coverage of Francis and partisan political focus, often supportive of former U.S. President Donald Trump.

Most notably, one of its leading hosts, Raymond Arroyo, has regularly promoted and interviewed the schismatic former papal ambassador to the United States, Archbishop Carlo Maria Viganò. Viganò previously has called for Francis' resignation.

In September 2021, during a trip to Slovakia, Francis himself offered a thinly-veiled criticism of the network, saying that while he may be worthy of personal scrutiny, the church does not deserve attacks such as those regularly made by the media outlet.

"There is, for example, a large Catholic television channel that has no hesitation in continually speaking ill of the pope," Francis said. "I personally deserve attacks and insults because I am a sinner, but the church does not deserve them. They are the work of the devil. I have also said this to some of them."

The remarks from Parolin, who is widely regarded as a cautious diplomat, mark a rare occasion in the pope's nearly decadelong papacy that the Vatican has directly criticized the network, which attests to its commitment to "redemptive Catholic journalism."

"The truth is what distinguishes information from communication," was the theme of Parolin's address, in which he said "communion is in the DNA of communication."

"A communication that instead fans the flames of polarization, or builds walls instead of breaking them down, betrays its very nature," he added.

In addition to Arroyo's weekly show, EWTN regularly hosts a "papal posse" of commentators known for their anti-Francis views, including Fr. Gerald Murray, a priest of the Archdiocese of New York, and author Robert Royal.

In his 2020 book The Outsider: Pope Francis and His Battle to Reform the Church, British Vatican journalist Christopher Lamb reported that the Vatican's current ambassador to the United States, Archbishop Christophe Pierre, had expressed dissatisfaction to EWTN CEO Michael Warsaw over the network's coverage of the papacy.

Warsaw is a consultor to the Vatican's Dicastery for Communications, and Parolin greeted him during the opening remarks of his address.

As he concluded his remarks, the Italian cardinal said he hoped unity with the pope would be " 'felt' and 'touched' in your television broadcasts, as well as in your articles and in your multimedia programs."

"May every one of your viewers or readers recognize EWTN as a work of God at the service of the truth, ecclesial communion, and the good of humanity," he concluded.

In Washington, D.C., Oct. 20, the day after Parolin's address, Arroyo led his weekly broadcast with an interview with Auxiliary Bishop Athanasius Schneider of Astana, Kazakhstan, one of Francis' most vociferous critics.