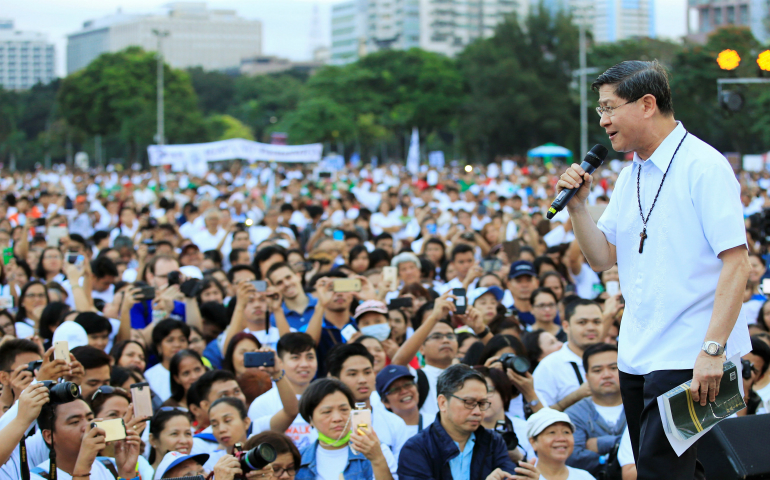 Philippine Cardinal Luis Antonio Tagle of Manila speaks to the crowd during a Feb. 18 protest against plans to reimpose the death penalty, promote contraceptives and intensify the drug war at the Walk for Life in Manila. (CNS photo/Romeo Ranoco, Reuters)

The Philippines stands poised to reinstate the death penalty after it was put on hold 11 years ago. The church in the Philippines, which has grown more vocal in recent months, continues to oppose the measure that passed the Philippine House on the third and final reading March 7 and is widely expected to move quickly through the Senate. This latest version specifically targets drug crimes.

In the months and weeks leading up to the Congressional votes on the measure, the Philippine bishops' conference has posted statements opposing the death penalty and led marches against it, reiterating that life is sacred and that the death penalty would not put an end to crime. Some leaders have also urged the faithful to go to their representatives and voice their opposition. The conference also signaled that should the death penalty become law again, it would support any effort to oppose the law at the Supreme Court level.

Throughout its history, the Philippines has imposed and suspended the death penalty, and the church has consistently opposed it.

Since taking office in late June, Philippine President Rodrigo Duterte has pursued drug dealers and addicts with laser-like focus. In July, his close associates in Congress filed a bill to reinstate the death penalty, to support his tough-on-crime stance.

So far in Duterte's "war on drugs," which started even before he was sworn in, more than 7,000 mostly poor people have been killed in both police operations and unexplained killings of alleged drug offenders. Currently, drug offenses carry sentences ranging from 12 years to life in prison, along with fines.

"Certainly we are for the campaign against drugs, and we know drugs can have very serious harmful effects on families," said Archbishop Antonio Ledesma of Cagayan de Oro. "But also we would like to say that drug offenders should not be subject to the death penalty, because it's not a humane and Christian way of dealing with the problem."

Ledesma, a strong critic of Duterte in the final days before the May elections, told Catholic News Service instead of putting drug criminals to death, the country needs to address the "root causes of poverty" and pursue rehabilitation.

Duterte has said he was not interested in killing drug users and dealers to make examples of them, but that he simply wanted them to pay for their crimes.

The head of the Restorative Justice program at Caritas Manila, Father Roberto de la Cruz, said, "We believe, the Catholic Church believes, well, any believer believes the death penalty would not be a deterrent to crime."

De La Cruz told CNS the church believes there is always “hope for change" for the drug offenders.

The Manila-based priest, who comes from a well-off family, said that more than two decades ago, he was a meth addict for 10 years. Then he found himself in a church listening to a talk on evangelization and decided he would seek help there to get clean. That was also the start of his discernment to the priesthood.

De La Cruz is one of the creators of Sanlakbay, which incorporates spiritual formation, counseling, work skills training, arts and cultural outlets and sports activities into a parish-based rehabilitation program.

As of March 6, he said five parishes in metropolitan Manila were involved in Sanlakbay and another five would also take part in the coming weeks. But the priest noted that the numbers of those who originally turned themselves in and went for church rehab dwindled significantly when it came to following through with the program.

Ledesma said apart from such programs, more effective than putting someone to death "is to have better implementation of the laws and to make sure that the justice system is fast enough to prosecute any wrongdoers."

He told CNS he did not think the death penalty was the answer to criminality.

"I think (the answer is) enforcing the law," said Roque. "Given the dire statistics on conviction rates, I'd say drug pushers are doing their trade because no one's really been punished. They only have a 10 percent conviction rate for drug cases ... So ... we don't need the death penalty. We just need to enforce the law."