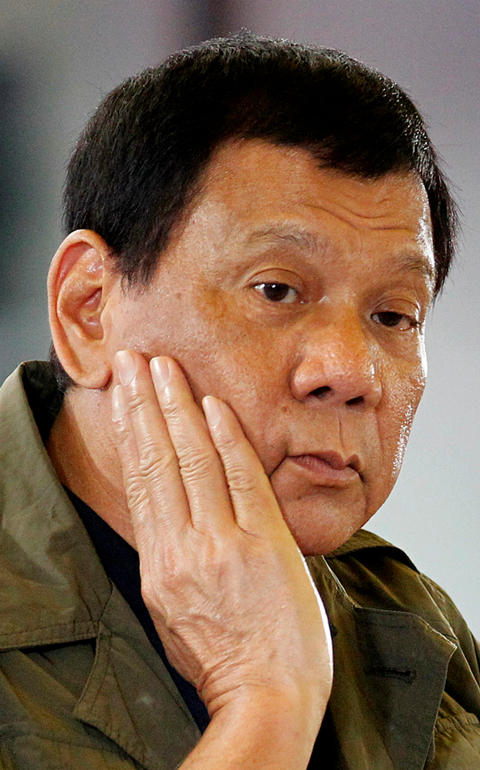 Philippine President Rodrigo Duterte pauses during a March 11 news conference in Baguio City. The head of the Catholic Bishops' Conference of the Philippines assured the government that the country's church leaders are not against Duterte, just some of his policies. (CNS photo/Harley Palangchao, Reuters)

The head of the Catholic Bishops' Conference of the Philippines assured the government that the country's church leaders are not against President Rodrigo Duterte.

"What we are against are issues, not the person," said Archbishop Socrates Villegas of Lingayen-Dagupan, president of the episcopal body. His remarks from an April 4 television interview were reported by ucanews.com.

"It is not the office of the president that we are attacking, so to speak," said Villegas, who said he and other bishops had a meeting with members of Duterte's Cabinet in late March.

In late March, Duterte renewed attacks against the Catholic Church, which has been vocal in its criticism against his anti-narcotics war, his plans to re-impose the death penalty and to lower the age of criminal liability.

Ucanews.com reported Villegas said he was surprised that Cabinet members agreed with the bishops on issues like the killings and the proposed revival of the death penalty.

"They are pleading with us to continue dialogue," he said. "We said we are open."

He said the church leaders would continue to oppose Duterte's "anti-life" policies and proposed legislation, like executing suspected drug users and dealers.

The archbishop said church leaders are supportive of the government campaign against illegal drugs, "but we're dealing with the issue of killings."

"Related to that is the seeming acceptance of that culture, that killing becomes something normal, something ordinary, and it does not disturb us anymore," said Villegas.

"If we don't protest against the killings or if we just keep quiet when innocent people become victims of summary killings, people might think that it is the new normal, and we are concerned about that," he said.

The archbishop said church leaders are offering an alternative to address the problem at parish level.

"We want to approach it as medical problem, as a health problem. And because it is a health problem you treat it, you restore the person back to mental, spiritual, psycho-emotional health, that is our concern," the archbishop said.