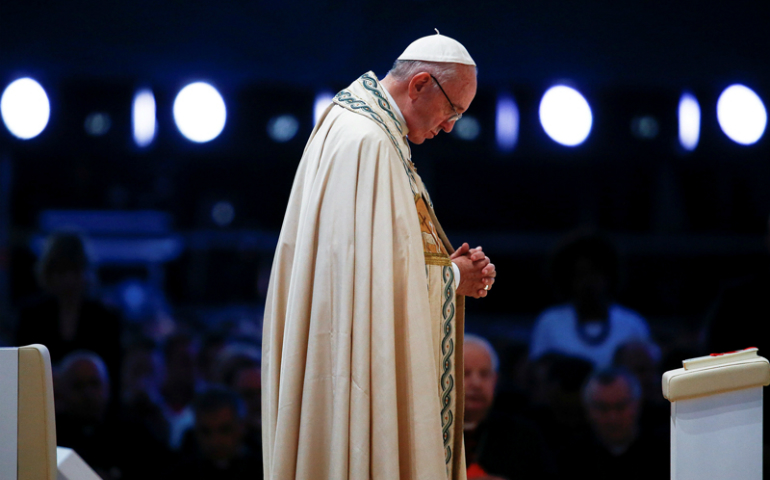 Pope Francis prays during a prayer vigil with youth at the Campus Misericordiae during World Youth Day in Brzegi, near Krakow, Poland, on July 30, 2016. (Photo courtesy Reuters/Stefano Rellandini)

Pope Francis has condemned clerical sex abuse as an "absolute monstrosity" and asked victims and their families for forgiveness on behalf of the Catholic church.

In an unusual move, the pontiff’s comments were published as a preface to a new book by Daniel Pittet, a Swiss victim who was sexually abused for four years by a priest when he was a child.

"How can a priest in the service of Christ and his church cause so much evil?" the pope said. "This is an absolute monstrosity, a horrendous sin, completely opposed to what Christ teaches us."

The pope said he had personally witnessed the damage caused by clerical abuse and it affected him deeply.

"Several victims have committed suicide. These deaths weigh on my heart and my conscience and on the whole church," Francis said.

"To their families I send my feelings of love and heartache and humbly ask their forgiveness."

The pontiff met Pittet, now a 57-year-old father of six, at the Vatican in 2015. In the preface published Feb. 13 by the Italian daily, La Repubblica and other media outlets, Francis said he was struck by Pittet's personal suffering and his desire to forgive his abuser.

In a related development, Francis last week called an abuse victim in the pope's native Argentina after the man's cousin wrote to the pope explaining how Rufino Varela, now 52, had been abused by a priest for years while in high school.

Varela wrote on his Facebook page that the conversation, which lasted several minutes, gave him "a lot of hope!"

According to a report on the Catholic news site Crux, Varela said Francis had apologized in the name of the church for what he had experienced. He said he told the pope about feeling abandoned by the church and the media, and about the vulnerability of other survivors.

Pittet’s book is entitled La Perdono, Padre (They forgive you, Father) and recounts his abuse from the age of eight, his many years of therapy and his forgiveness of the priest who allegedly abused him and other children.

"I thank Daniel because accounts like his break down the wall of silence that has suffocated scandals and suffering and expose a terrible shadow on the life of the church."

The pope said his action was an important step towards reconciliation and for pedophiles to take account of "the terrible consequences of their actions."

Over the past 15 years the Catholic church has been rocked by revelations of clergy sex abuse scandals in a crisis that has spread from U.S. and Ireland to Belgium, Australia and increasingly to other countries.

Last week an Australian government inquiry into institutional abuse heard over 4,440 Australians claimed to have been victims of church abuse between 1980 and 2015.

After a slow and often halting response, the Vatican has stepped up its efforts to address the crisis.

Francis has gone further than his predecessors in this regard, setting up a special commission to combat the abuse of children in the church that includes a victim, and establishing a Vatican tribunal for judging bishops accused of protecting abusers.

The pope in the preface to the book reiterated his commitment to holding churchmen accountable, saying "it is our duty to be extremely strict with the priests who betray their mission, and with their hierarchy, bishops or cardinals, who might protect them, as has happened in the past."

But victims groups in the U.S. and elsewhere have expressed deep skepticism about the pope's policies and say the Vatican simply needs to punish both abusers and their protectors.