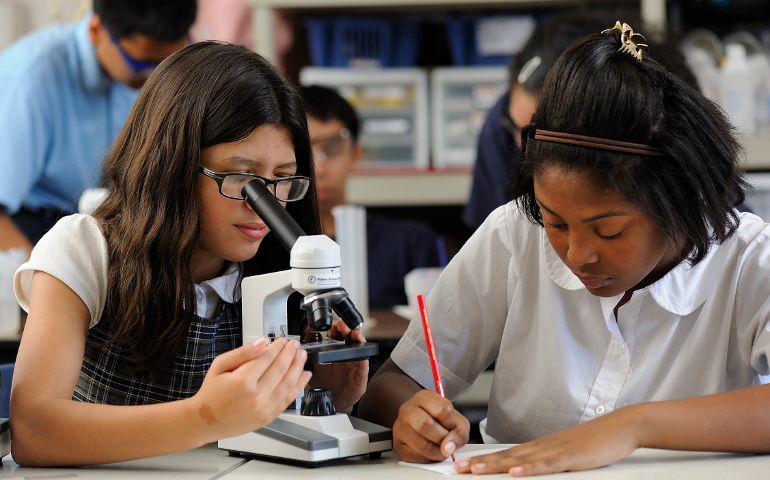 A science class at one of the Catholic Partnership Schools in the Camden, N.J., diocese (David DeBalko)

Camden, NJ — This small city (population 77,000) across the Delaware River from Philadelphia is nationally known for what it lacks: security, resources and, in many cases, hope. It ranks near the top in crime and poverty in listings of American cities.

But one thing it doesn’t lack is schools. There are some 46 elementary and high schools in the city. They are operated by the Camden City School District and a host of charters, both for-profit and nonprofit, funded by the state of New Jersey’s efforts to boost educational achievement.

Four elementary schools in the city, however, do not collect any funds from the state. They are Catholic and are operated by the Catholic Partnership Schools: Sacred Heart, St. Joseph Pro-Cathedral, Holy Name and St. Anthony of Padua. A fifth Partnership School, St. Cecilia, is in nearby Pennsauken and includes students from Camden.

While Camden lacks much, it is abundant in Catholic elementary school education.

Dietrich emphasized that the schools of the partnership are more than simply staying afloat. By offering innovative programs, including sports, an orchestra, boat-building, aviation, an instructional coach, and afterschool enrichment, Catholic school students in one of America’s poorest cities receive an education comparable to what their better-off neighbors receive.