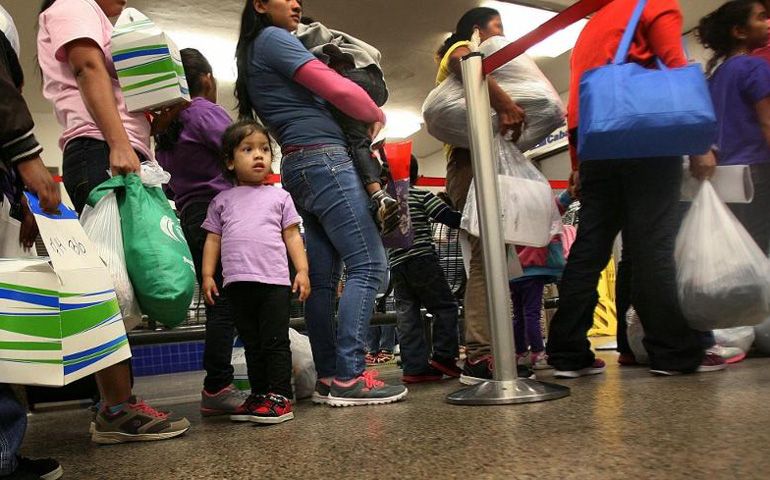 Genesis Pagoada, 2, of Honduras stands in line with other immigrant families released from a detention center July 14 in Dilley, Texas, at the Greyhound Bus Station in San Antonio. (GSR photo/Nuri Vallbona)

Hilda Ramirez heard the immigration official pounding on the door and calling her name.

She whispered to her roommate. "Tell him that I'm in the bathroom." But the officer came back twice as Ramirez cowered with her 9-year-old son at an immigration detention facility in Karnes City, Texas.

"I'll be there right there," she called when he knocked a third time. Ramirez knew that when officials called your name, it either meant a scolding or deportation. So the young Guatemalan mother, who had been in detention with her son, Ivan, for 11 months, ran to call her lawyer.

The attorney, she said, laughed. "'You're getting out. I'm coming to get you this afternoon.'"

But freedom came with a price, she soon found out. After signing papers and listening to instructions, an immigration official presented Ramirez, whom ICE considers a flight risk, one more item.

"I felt a little strange," Ramirez said. "I felt like you only put those on criminals to keep them under control. I wasn't in agreement, but at least I was getting out."

Immigration and Customs Enforcement officers are increasingly using practices described as alternatives to detention, or ATD, to keep tabs on immigrants released from their detention facilities. The most common alternative methods used by ICE are electronic monitoring by ankle bracelet and telephone check-ins.

Immigrant advocates often describe the ICE approach as an alternative form of detention, not an alternative to detention. Instead, they promote reasonable bail, access to lawyers and community-based efforts.

Nonprofits step up to offer legal advice to immigrants