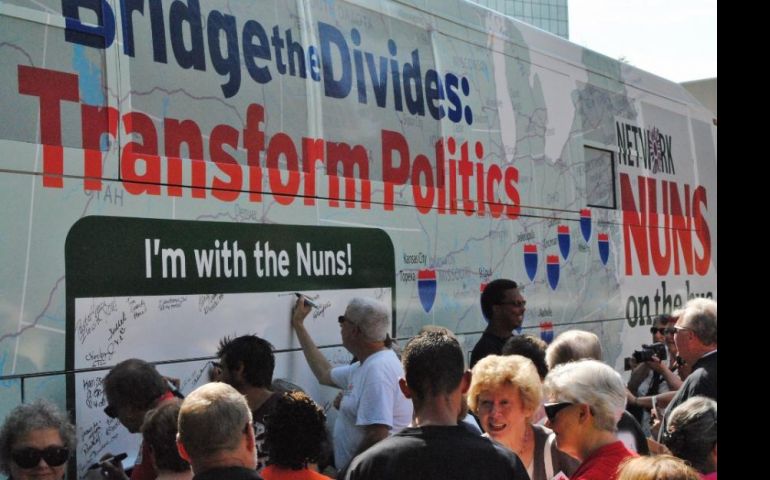 After the inaugural rally to begin the 2015 Nuns on the Bus tour, people were invited to sign their names in support of its goals. (GSR photo/Dawn Cherie Arajuo)

As Social Service Sr. Simone Campbell and the Nuns on the Bus tour bus rolled onto St. Louis' Kiener Plaza on Thursday, a crowd of about 70 people -- many women religious -- began to cheer. The cheers continued as Campbell emerged from the bus to kick off the 2015 tour, the latest iteration of what has become Campbell's annual tradition of traveling the country talking to people.

"What a treat it is to be here in St. Louis with our very subtle bus," she joked when she reached the microphone. But then her tone turned serious as she described St. Louis as a symbol of both the darkness and the light of the United States.

From where she stood on the plaza, Campbell explained, she could see both the St. Louis Arch, which she called a gateway to the American dream, and the courthouse where the Missouri Supreme Court ruled in 1852 that blacks were not and could not be citizens of the United States.

"We are a nation of both hope and trouble," Campbell said.