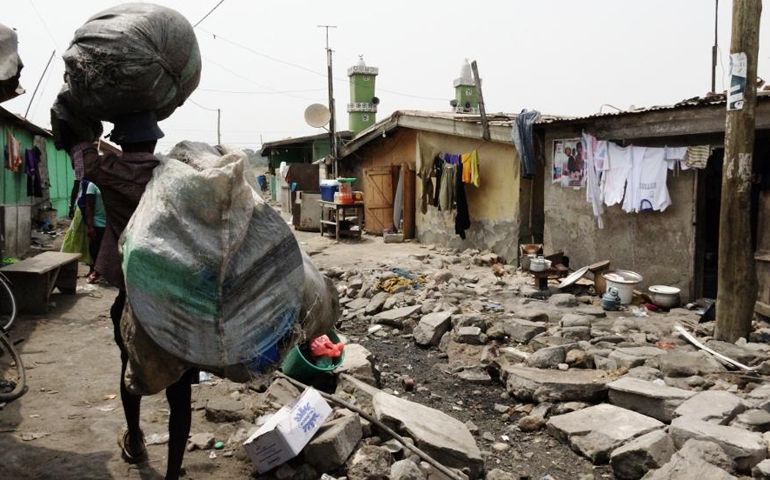 The streets in the neighborhood around City of God Adult School are not recognized by the government; they flood during the rainy season and trash is not collected, nor is sanitation monitored. (GSR/Dana Wachter)

Accra, Ghana — Global Sisters Report is publishing a special series about how trash is managed in the world and how sisters are helping people affected by landfills. We start this project to mark the one-year anniversary of Pope Francis' encyclical, Laudato Si', about climate change, pollution and waste, which warns that: "The Earth, our home, is beginning to look more and more like an immense pile of filth."

Sodom and Gomorrah has 100,000 residents and no schools.

The infamous slum in the south of Ghana's capital of Accra is actually Old Fadama, but everyone outside calls it Sodom and Gomorrah. The illegal urban settlement is a crowded maze of ad-hoc buildings where transplanted refugees from Ghana's severely underdeveloped northern region live. Sodom and Gomorrah is its derogatory nickname for people who think the slum is filled with crooks, junkies and prostitutes.

The government refuses to build schools, or barely any permanent infrastructure, in Old Fadama, because it is an illegal slum that they hope to raze to the ground. The residents have no rights to build on the land, and the government has threatened to evict them, even bulldozing parts of the slums last July.

Old Fadama is internationally famous for the Agbogbloshie electronic waste dump, where men and boys spend their days breaking apart the world's e-waste by hand and burning the parts down to salvageable metals. The photos of this process have made their way around the world, prompting outrage.

But the residents of Old Fadama don't want your pity. People who call it an e-waste "dump" are just as bad as those who use the nickname Sodom and Gomorrah, they say.

Shut in, locked down, no green space? Six tips to connect with nature